Getting my green thumb on 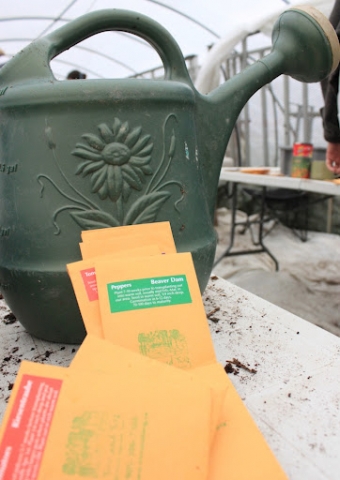 I chalk any gardening successes I've had up to a stroke of luck more than a stroke of genius.

I've only been a gardener — a term I use rather loosely — for the past three summers and never could there have been three summers more different when it came to what Mother Nature bestowed upon us. Cool and wet, hot and dry and just plain bizarre sum up 2009 to 2011 respectively. What little knowledge I do have when managing that plot of dirt in my yard, I've gleaned from those few moments I've tried helping (read: probably hindering) Linda Crago on her farm early in the season, usually as she preps for her annual tomato transplant sale. I've read select passages in gardening books, too, but still, other than garlic and greens, plants struggle in my care. I've blamed it on my postage stamp yard and the legal envelope-sized silver maple occupying most of it, casting its shade in critical spots. There's also so much I don't know about gardening. The problem is, because I'm such a novice, I don't always know what I don't know, so I don't even know what questions I should be asking to find out, you know? Fortunately, there are people like Linda to fill in the blanks, including the ones I didn't know existed. So, yesterday, I took my tarnished green thumbs to a gardening workshop that she hosted in a hoophouse full of sprouting inspiration. Against a backdrop of healthy, vibrant greens that are the makings of her current CSA baskets, this heirloom vegetable grower tried to set about 20 keeners down the right garden path for this growing season — and every other one — ahead. First things first, though. One can't have a garden without seeds. I've tried starting plants from seed with mixed results. No surprise, greens aren't a problem for me. But other veggies in waiting haven't done so well. Beets are one. Spring onions are another. And peas have been so-so. So, I'm a little daunted by the whole prospect of starting plants from a little bitty speck of something.

"Seeds are meant to grow," Linda told us. "It's really amazing. You shouldn't be intimidated by seeds." Turns out my problem may have been how I've stored my seeds. That dark drawer in the kitchen that I thought was ideal was sucking all the life force out of my future gardens. "I've had the best luck putting seed in the freezer," Linda said. "I've had some seed viable after 10 years." Most though, has grown into something up to seven years after she has acquired it and let it chill. But her success could also be the source of her seeds. I haven't tried saving seed yet — maybe I will this year should I grow a healthy specimen of something I'd like to propagate — so finding good seed is a matter of asking those who grow vegetables successfully where they get theirs. In Linda's case, it's William Dam, the Cottage Gardener, Urban Harvest and, particularly, Seed Savers Exchange. "They've saved more seed from extinction worldwide than any other company so I'm happy to support them," she noted. Still, to ensure seeds are viable, Linda gave us a helpful hint. You can wet the seeds and put them between a wet paper towel, wrapping the soggy mass in a plastic bag to see if anything germinates. Or, if you prefer to have your hopes confirmed or dashed more quickly, put them in a jar with water. Those that sink are viable. Those that float are duds.

Next up: judging when to plant. I admit, I'm a bit of an eager beaver and this week, this third week of March in southern Ontario when temperatures freakishly soared to the mid-20s (Celsius for any American readers), I found myself feeling like I needed to get out there soon. Gardening season was upon us, despite what the calendar said. I reined myself in, mostly because my patch is a mucky mess. Good thing, too. Stay off soil until you can pick up a handful, make a fist with it and have it crumble. If it forms a ball, it's still too wet to work. "Once you mess with wet soil, you've made a mess of your soil for years. You don't want to mess with wet soil," Linda warned.

While I'm fairly certain my soil is more clay than sand, judging by the way it holds moisture and the feel of it, those unsure can throw a handful of their backyard earth in a jar with water, shake for a good five minutes and see how everything settles. The heaviest soil particles — sand — will sink. Mid-level, you'll find silt. "Clay is the finest particulate and it will float," Linda said. And, if you're — ahem — blessed, with clay soil, she recommends amending it instead of bringing in new soil entirely. When it comes to planting seeds indoors, mid-February is high time for seeding onions and leeks, cutting back the fine, grass-like tops when they get to about five inches long so the young sprouts put their energy into bulbs. After 12 weeks, they can be transplanted. Next, seed eggplants. This happens about 10 weeks before the great outdoors is ready for them and they can be transplanted. Tomatoes can be seeded six to eight weeks before transplant time. Another helpful tip: plant seeds to a depth that is twice their length. I know I've planted some in my gardening career that are the equivalent of six feet under and that could be why the only thing that grew was my disappointment. Last year, I dropped my kale seed directly into my garden. I have to admit, of all the greens I grew, it was my poorest. Linda suggested seeding brassicas indoors and getting them out early. She's an even bigger proponent of it this year, given our mild winter. That has her wagering pests are going to relentless this summer, enjoying our harvests before we can. It's not even April and Linda reported a potato beetle sighting already. Diatomaceous soil sprinkled on plants kills pesky flea beetles. Keeping plants as healthy as possible will also help fend off hungry bugs. Unhealthy plants attract pests that will, ultimately, do them in. Using a mix of perlite and vermiculite as a soil starter helps to ensure air gets to the seed. Another note to self for me since I use garden soil, which I learned can suffocate seeds. I've choked many in my time, I'm certain. The soggy cells in my peat trays with no sprouts to bear are a sure sign. After watering my newly sown seeds, I saw my fluffy garden soil deflate and felt a bad feeling settle into my gut. Even this year, I've made this mistake, leaving me crossing my fingers that those compacted little pods will become more than caked mud. Fingers crossed I make it to this point, but next up comes transplanting. My first year gardening, I missed one crucial step. Impatient to get growing, I didn't bother hardening off any plants I started myself. Going from a full-time existence indoors to a permanent life outdoors caused my chard to look rather sad within a few hours in the sun. It came back but all those young beautiful leaves I'd nurtured indoors were toast. Harden off by leaving plants outdoors for a short period of time (I started leaving mine in the shade at first after the chard debacle) and increasing their exposure a little more each day. That should get them ready for their big debut in the garden.

Transplants grown in plastic containers create a good root ball, Linda said. Making transplant pots out of paper is a low-cost option and the paper doesn't have to be removed before the plant goes in the ground. There's also peat. But it dries out and the roots don't break through, Linda said. Be sure to fertilize when putting plants in the ground. Kelp was Linda's recommendation. Fertilizing monthly is also in order. Unless you're a tomato. I would have thought this would be cruelty to tomatoes, those apples of Linda's eye, but it turns out she doesn't water them once they're transplanted, except at the end of the season. No matter how sad, there's always tomorrow, with pathetic leaves looking like new in the morning. I can't help but feel for me, this is just asking for trouble and gambling with my garden. So for the non-believers out there, she offered this advice to avoid the dreaded, ugly, brown blossom end rot: "Don't water too much, but if you water, water consistently." When all else fails, ask Linda. Her blog will be loaded with vegetable growing tips throughout the season. Wish me luck!