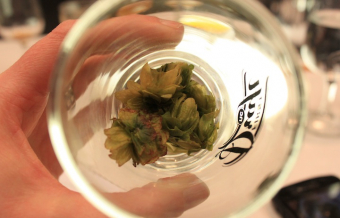 Don't tell anyone but I'd choose a pint of porter over a Riedel of rosé.

I don't like to say that too loudly living in a wine region but I can't deny it. I'm a beer girl. While people from afar visit Niagara and dream of one day living in a vineyard and having their own winery, I secretly pine for life in a brewery, spending days breathing in that malty, hoppy, grainy, yeasty smell that brewmasters are lucky enough to inhale daily.

That's not to say I don't love a good glass of vino but wine, to me, is like that person with whom I really want to be friends but I just never feel entirely comfortable or like I can relax in their presence.

Beer is the one I know won't judge me, no matter what I do. The cool cat that has an uncanny ability to put a person at ease. It's magical. Seriously. If you ever have an upset stomach, drink beer instead of Pepto Bismal. You can thank my German relatives for this bit of wisdom.

It's people, such as Ian Watson, brewmaster of Niagara's Best beers, or the students in Niagara College's brewmaster program whom I credit with romanticizing suds for me and leaving me dreaming of another career in an alternate universe. Just me, a kettle and a keg and everything I'd need to create the beauty that is a brewski.

Last weekend, my love for all things barley and malt led me to the college where a team of brewmaster students showed off some of the most thoughtful and creative keg creations. It was a chocolate-themed beer tasting and that meant beer that tasted chocolaty or something chocolaty served with beer. Paradise, really, given these are two of my favourite things, next to kale.

My inner cicerone was in heaven as I sipped icewine cask ale and noted a mild hoppy, citrusy flavour, downed a rich mint chocolate porter and enjoyed refreshing choc-o-wit, a Belgian wheat beer that married chocolate and orange. There was German Schwarzbier (jawohl!) and barley wine, too.

As I sat in a tasting lab with about two dozen beer buffs, I wanted to be one of the select few students who get accepted to the college's small but highly sought after program and make beer like this. Hundreds apply while only about 35 students gain entry. Cue the envy.

Each student who shared their custom brew made for this event spoke so passionately about how they combined mint extract and fresh mint to make their dark, smooth elixir, or added icesyrup, the sticky, sweet liquid made from frozen grapes, to their ale at just the right moment, providing the yeast with a sugary feast to give the beer its effervescence.

The barley wine, a.k.a strong ale, and its buzz-inducing 10.8 per cent alcohol, aged for three months and made with nearly wild Bertwell hops, warmed with its whisky colour, thanks to the bourbon barrels in which it fermented.

Each beer was paired beautifully with food -- salmon poached in the wit beer, lamb in a mint sauce with the porter (I just ate the veggies) or a porter ice cream float, white, milk and dark chocolate wafers munched with the barley wine, and bacon-wrapped chicken with a spicy barbecue sauce offset by the sweet icewine cask ale (I had a lick of the sauce and indeed, those two were meant for each other).

Unlike wine, which has acidity to cleanse the palette while you eat by cutting through fatty foods, beer relies on its glorious carbonation and the bitterness of the hops to do that. It does it well, too.

But I swooned just a little bit as I savoured a sauerkraut chocolate cake matched with a Black Forest Schwarzbier. The black lager -- "a porter with a German twist" -- had a kilogram of cocoa and some tart cherry concentrate added to it. If ever there were soulmates in the world, this beer and that cake were it. This pairing alone was worth the $25 admission to an event that left me well fed and watered.

Despite all the fertile ground in Niagara that goes into grapes, there is a beer culture brewing here. This region could easily be birthplace of the next craft brewmaster, whose ale outshines the rest. You can even taste some of what's to come at the brewery store on campus. Really, these students deserve a glass raised in their honour.

And this girl will go on to dreaming...