Pumpkin soup and the pipes to prove it 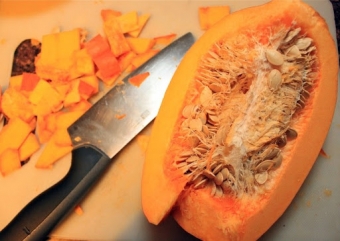 I'm relieved that Halloween only comes once a year. I'll be honest, I find carving a pumpkin to be a lot of work. Seriously, hacking into those thick-fleshed orbs works muscles I forget I have. Scraping out its guts? Ditto. I won't even get into my lack of artistic skills that are pushed to the limits carving triangle eyes and a deliberately crooked smile that always comes out straight. Really, the work is in the cutting so I'm not sure why I thought the two-pound pumpkin that had taken up residence in my garage, rooming with what was once an entire community of spaghetti squash, would be any easier to dissect. But I did. 'You're not so big,' I thought. 'No way you can be as tough as those pulpy beasts I turn into — ahem — art for October 31. I can whip you into soup in no time.' Or you, dear pumpkin, can kick my butt. And with all the deference I can muster, I acknowledge you did just that, you small, but mighty, gourd. I've had plans for that pumpkin, which came in my winter CSA basket from Creek Shore Farms in Jordan weeks ago. Bread. Muffins. Pancakes. But after eating some thai sweet potato soup for lunch last week, I thought I'd put an exotic soupy spin on a rather plain pumpkin. It struck me as an even better idea to do this after coming home from a long day at the office, too. Soup would be simple. An easy meal of comfort food. And it was, save for the hour — 60 whole entire minutes — it took me to peel and chop my pumpkin into half-inch pieces. There's a reason why I've always instinctively roasted squash before doing anything with them and on this night, I learned the hard way yet again that I should always trust my instincts. After all, roasting softens the flesh, making it easy to scoop out and soup-ify. Cutting up a raw pumpkin really is akin to a workout with a Schadenfruede of a personal trainer. Even with my sharpest, most favourite knife, it was a battle and my biceps throbbed. Though I prevailed, I think I may have acquired carpal tunnel syndrome in the process. Still, once I got that pumpkin, now in bits and pieces, into the soup pot, mixed it with coconut milk, dry roasted shallots and cilantro, the fight it put up getting there was but a bygone. As the sweet smell of the coconut milk, the earthiness of the pumpkin, the kick of the shallots and the perfumey cilantro floated through my kitchen, I swore I was inhaling the best smell ever invented. They should bottle this stuff, I thought, as I stirred and breathed deeply. If I hadn't been so hungry, I could have hung my head over that soup pot all night.

I couldn't wait to eat this soup, though. The recipe called for some fish sauce to give it a salty boost. After a brief introduction to my hand blender, showing that pumpkin who was boss once and for all, my soup was ready to eat. It was creamy and mild — and missing something. Missing two things, actually. A shot of lime juice and sambal oelek did the trick, though the soup lost some of its pumpkinness in what was a delicious mix. As I lifted each spoonful to my mouth, enjoying each slurp, relishing my feat of strength, I mentally patted myself on the back. With arms that felt like jelly, I also had an a-ha moment about pumpkin. There's a reason why you can buy this stuff in cans.

Adapted from a recipe in Hot, Sour, Salty, Sweet by Jeffrey Alford and Naomi Duguid.

To dry roast the shallots, heat a dry skillet over a medium-high burner.

Add shallots, turning every few minutes to let skins char and blacken. Remove and set aside.

In a pot, combine the pumpkin, shallots, coconut milk, broth and cilantro. Bring to a boil.

Simmer over medium heat until pumpkin is tender, about 15-20 minutes.

Stir in fish sauce. Cook another three minutes. Remove from heat and puree.

The leftovers are even better next day.