The final five: my favourite food moments of 2011 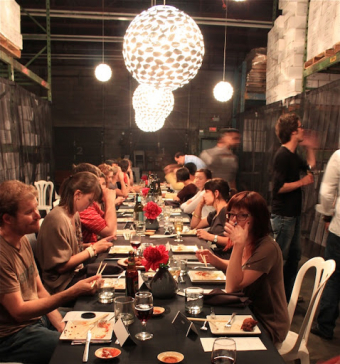 And then there were five moments left to count down in my top 10 list of favourite food moments of 2011.

Here are the rest of the highlights from the year that was at the table, in the kitchen and in the garden.

5. My first supper club outing. It was finally in the cards for me to attend a Kickstand Supper Club dinner on the down-lo in June and I can't wait to do it again.

Not only did I eat a meal in an unexpected place — who knew a lighting warehouse could make a good dining room? — I had a fantastic time feasting on exceptional Asian fare with about 30 strangers who turned out to be fabulous dinner companions.

I'd never been part of a supper club before. In this case, I was summoned to the lighting warehouse behind the boxing club in St. Catharines by a cryptic email. I didn't know what I was going to eat or who was going to prepare the fare. I didn't even know who would be there to enjoy it with me.

After taking our assigned spots around a long rectangular table and next to people we didn't come with (no matter for me since I was alone), we dined at a leisurely pace, discussed food, wine, books, our hometowns, music, running marathons and everything else.

People connected over food and drink. Dinner was a social event rather than a perfunctory act.

Eating out was exciting again.

4. Creating Chive Walk with a crew of guerrilla gardeners. Half a dozen green thumbs gathered along the newly poured walkway to the Niagara-on-the-Lake Community Centre with garden gloves and spades in hand.

We set to work, inspired by one woman who wanted her town to be more like an English city that reinvented itself by turning playgrounds and cemeteries into farms, the train station into an herb depot, and became incredible and edible thanks to the creativity of its residents.

And in strips of dirt alongside the concrete stretch, we planted chives for our very own Chive Walk, a place where residents could snip the garlicky herbs or admire something quirky and beautiful instead of enduring the mundanity of more grass. It was one part beautification exercise and another part food security measure.

It was quite the sight when it was done but alas, chive walk succumbed to the whipper snipper of a summer student employed by the town. Although the spiky sprigs came back, they were soon shorn again before anyone could enjoy them.

No matter. I sense more guerrilla gardening in the future and greater success, too.

3. Gorging on white asparagus in Germany. My visits to Germany to see my relatives are always packed with loads of food memories. Good eating abounds in Deutschland but this past spring, I ate something that had never graced my fork before.

White asparagus. Spears deprived of light. Albino asparagus deficient in chlorophyll. But they weren't lacking in sweet, mild flavour made even more perfect by my aunt's homemade Hollandaise.

White asparagus are hugely popular in Germany. There are even festivals devoted to this vegetable that trumpets the turning of spring into summer. My folks used to go ape when they'd see jars of them in the store here, much to my disgust (hey, I was a child and few veggies didn't gross me out). And now I understand why crowds gather in city centres and at dinner tables to celebrate "Spargel."

I can easily say that a simple supper of spears and sauce was one of the best meals I ate all year.

2. A pear-fectly good use for the unsung hero of fruit. I always feel a sense of satisfaction whenever I scale a ladder and scour fruit tree branches in search of ripe pickings for The Garden of Eating — Niagara. The program delivers the harvests to social organizations that don't see much in the way of fresh food donations through the year.

But this year marked a major coup for GOEN. Pears that would have otherwise gone to waste weren't just spared a trip to the compost heap. They were canned by hospitality students from the Niagara Catholic District School Board, thanks to teacher Mike Gretzinger offering their help.

That means fruit for those in need long after the leaves have fallen and pear season is but a distant memory. I am so grateful for their hard work and touched by their help, which ensures food donations during a time when the shelves are close to bare.

About 800 lbs of the bell-shaped fruit was preserved. That's more than 160 two-litre jars. Philanthropy is in the can.

Some of the jars of pears picked by The Garden of Eating — Niagara and packed by Mike Gretzinger's students.

1. Christmas dinner. A do-over of Christmas would be great. A medical issue kept me housebound and meant the family Christmas in Waterloo wasn't going to include me or my husband Steve.

Despite how we were both feeling, a Tofurkey dinner with local baked grated beets, local mashed potatoes and local greens was served. But because I was far from on top of my game, the beets were overcooked and dry, the mashed potatoes were gummy and I got carried away with homemade horseradish I added. The mushroom gravy congealed and, well, it was far from a stellar dinner.

The food may just qualify as downright awful, in fact. But as the two of us sat down to eat, my sweet, obliging husband politely praising my efforts, all done in my housecoat and in pain, it turned out to be a pretty great meal after all.

Sure, food is the focal point at the table, especially during a festive fete. But a great meal is made by more than just the sum of its ingredients. It's as much, if not more, about the intent and the company as it is the actual fixings.