A love that's easy to muster 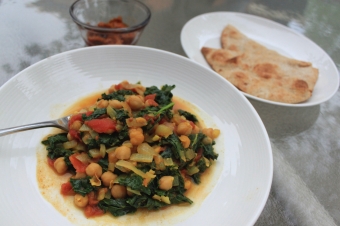 This chickpea curry with mustard greens is a great way to combine the hearty legume with lovely leafy greens, which will grow well until the first hard frost.

It's rare for me to meet a vegetable I don't like. (Be quiet celery.)

It's a food group that makes my mouth water with ease. My passion, though, is leafy greens, my love for which I have professed time and again in countless blog posts.

Kale is my comfort food. Stir-fried with some ginger, soy sauce and a splash of rice vinegar and I am in heaven. Chard, you're not so bad yourself. Collards, you have my respect. But there's another green, come this time of year, for which my appreciation runs as deep as the shade of black-green on a crinkly lacinato kale leaf. In winter, my heart belongs to the mustard green, those snappy, peppery leaves, made bold rather than bitter by the cold and grown by the woman who has expanded my veggie horizons like no other, Linda Crago.

I remember the first time I tried mustards. I was taken in by their ruffled, purple-speckled appearance and taken aback by a fiery flavour I hadn't tasted before. I asked Linda what she had put in my basket, that day late in her CSA season. It must be mustards, she said. And so began an affair that warms my vegetarian heart through the cold months when fresh local greens are virtually non-existent.

I've never seen mustards in the grocery store, only heard via the Twitterverse that some farmers markets in Toronto may have the fringed, pungent leaves at this time of year. More folks are getting to know what I'm talking about when I mention them, encouraging them to track them down and gorge on their goodness. Aside from a kicking flavour, mustards are apparently good at lowering cholesterol. They boast cancer-fighting properties, much like my other beloved greens. Mustard leaves are also loaded with vitamins K, A, C and folate, for those keeping track of the recommended daily intake. Darn near perfect food, if you ask me.

Admittedly, though, I don't know that I do these virtuous veggies much justice in the kitchen. Because of their anything-but-wimpy flavour, I'm often stumped by them. My guilty pleasure is to stack them high on my veggie version of a BLT with tempeh or when I'm being really bad, soy bacon. (Hey, I don't eat it often, but once in a while, there's little better when the craving strikes). I'll chop some up to liven up salads of more muted greens.

But adding them to cooked dishes, well, I'm not so sure about. Mustard leaves aren't as hardy as kale, so don't need to be heated nearly as long. Go overboard on the cooking and that fresh green colour looks fatigued. And their bite becomes more bark when cooked, the leaves losing some of that powerful flavour. Out of all my many cookbooks, brimming with thousands of recipes, I have found only two how-to's for mustard greens, confirming their power to perplex cooks elsewhere. Still, one recipe I did find in that perennial culinary guide, The Joy of Cooking, has fast become a favourite, and I've made a few modifications to it to make it my own. Get thee to Linda's farm in Wellandport, or Chez Nous Farms in Stevensville from some mustard greens. Mingle Hill Farms also grows a variety of mustards, including microgreens. Asian grocery stores are also a good bet.

And if you can't get mustard greens, other greens, such as kale, chard or collards will work wonderfully, too. It will result in a love that's easy to muster after just one bite.

Heat oil in a skillet. Add onions, garlic, ginger and cumin, cooking over medium heat until onions are softened, about five minutes.

Stir in curry powder, coriander, cayenne, and cook two to three minutes. This intensifies the flavour of the spices. Add stock and chickpeas. Bring to a boil and reduce to simmer.

Add tomatoes. Cook about 10 minutes. Add mustard greens and cook three minutes or until tender. Be careful not to cook them too long or they can become soggy and slimy.

Serve over a bed of naked oats, a fabulous, nutty-flavoured Canadian substitute for rice, or with naan bread.