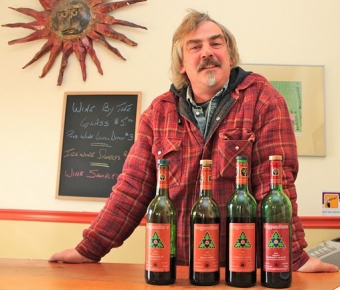 If Jens Gemmrich could have one do-over, it would be his winery's namesake.

The pond behind Gemmrich's home and Frogpond Farm winery store is a beacon for jumpy amphibians, deer and all kinds of other wildlife.

But the watery hole that Gemmrich dug after purchasing his Niagara-on-the-Lake vineyard in 1996 is a magnet for something else.

Something that does this grape grower, winemaker and veritable jack of all trades no favours in his sometimes fickle line of work.

"In the winter, you have all this cold air sitting here. It creates a frost pocket," Gemmrich lamented. "Those years when it's cold, we get a lot of damage.

"It seemed like a good idea — like you can do a lot with heavy equipment — but at the end of the day, you don't improve anything."

The German-born Gemmrich, who once served as winemaker at Stonechurch Vineyards, isn't about to erect a towering wind machine or two to help his Riesling, Cabernet Franc, Merlot, Chardonnay and Vidal vines cope, either. At $30,000 a pop, it's an expense this craft winery operator, who does just about everything himself — he's even a cooper — can't justify for his 10-acre plot.

But then, Gemmrich eschews all the trappings of conventional viticulture. As the proprietor of Niagara's original certified organic winery, Gemmrich refuses to spray, over-mechanize or do anything against the forces of nature for the sake of his livelihood.

In those cold years when the pond wreaks its havoc, he cuts his losses. In 2003, that meant writing off his entire harvest.

"There was never any question," Gemmrich said about going organic. "Living here, you don't want to expose your children to (chemicals)."

Gemmrich comes from a farming family in southern Germany. They worked their vineyard there with chemicals, he said, and after reading all the warnings on the product labels, he became convinced there was a better way.

Being the first to do without those chemical helpers in Niagara, however, meant that it took some convincing for others to get on board with Gemmrich's early earth-conscious crops.

"The first crop I grew, there was no interest in bottling a separate organic wine," he said. "There was a lot of resistance."

Industry folk doubted Niagara's climate would be conducive to organic grape growing. The heat and humidity would leave the berries vulnerable to disease and needing to be doused with a chemical remedy.

"There are challenges with everything. It's not harder than growing conventionally. You have problems and you have to come out with creative solutions for it," he said.

His most intensive work comes at the beginning of the growing season, as he sets up his vines to prevent issues from arising later in the crop cycle. He uses compost instead of artificial nitrogen as fertilizer to produce strong, healthy vines. He keeps the canopy of leaves open to keep moulds at bay and let in life-sustaining light and air.

"Some people catch every cold because they have a weak immune system so they buy every cold medicine but they still get sick," Gemmrich said. "If you have a problem with fungus, it's because the plant is weak so nature recycles it. We try to keep it strong so nature doesn't recycle it."

Others didn't buy in to Gemmrich's organic vision because they questioned the whole concept, even felt threatened by it because it could give his wines an edge, he recalled.

Jens Gemmrich in his vineyard

"What are you afraid of? We're a 10-acre farm," he said. "We don't do this for marketing. We do it because we actually think it's the right way of doing things."

Ten years after after Gemmrich's first vintages were released in 2001, Niagara boasts biodynamic wineries — think of it as hyper-organic farming, combining agriculture and astronomy, in addition to working in harmony with the planet — and others proclaiming the use of organic methods in their tipple production.

Having been an Opa of the movement locally, Gemmrich is just happy to see such production methods finally taking root here.

"It makes me proud of myself sometimes," he said. "It's like you stepped on a stone, it became loose and it started rolling downhill and you had a movement happening."

Since flooding Frogpond — and Niagara — with organic vintages, Gemmrich said he gets customers on his doorstep who embrace organic as a lifestyle for themselves. Others just want good wine.

"Wines have become boring," Gemmrich said, standing in his wine shop as his flock of Guinea hens scampered through the yard outside.

Some wine regions in the world try to make their vintages taste like others, despite different growing conditions and soil, he explained. They grow the same grapes the world over, ferment them with the same yeasts and do little different throughout the entire winemaking process.

"There's similarly grown Chardonnay in Australia, California, Canada. We use the same techniques, the same oak barrels and that doesn't make sense to me," Gemmrich said. "I think it's the wrong approach to winemaking. Why do we want to make it the same? We should be able to grow Riesling here and people should be able to recognize it as Ontario Riesling."

Growing organically, without artificial interference, helps produce wine true to its Ontario roots, he added. That's also why he limits his production to just a few varieties that do well in Niagara's climes.

Given that Frogpond is Gemmrich's handiwork, from the farming to the winemaking, is there one hat he'd rather wear over another?

Gemmrich also raises chickens, Guinea hens and sheep on his farm for his own consumption. No farm is complete without animals, he said.

Some days, he'd take simply being the winemaker. Others, well, it just depends on what task is demanding his attention, he said with a smile.

"I'd love to be a farmer right now because you are done for the year," he said, having just finished up several 100-hour work weeks that came with the grape harvest and pressing. "It's dark early and your day is done.

"But in the winery, there's a light you can turn on."