Canning for grades and the greater good 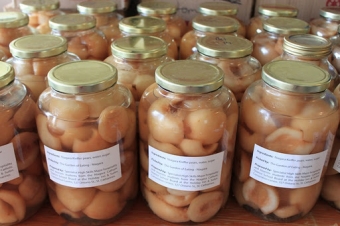 After spending a good part of their fall canning 800 pounds of them, there's an even better chance these tourism and hospitality specialist high skills major protegees have a serious hate-on for the humble fruit.

And I fear, it's all my fault, since the pears, and the life lesson in canning they provided, came compliments of The Garden of Eating — Niagara and a team of volunteers who spared these pears from going to waste in the orchard so they could be eaten by people who wanted and needed them.

"It was exhausting. It was just the same," lamented Lindsay Nardangeli , a Grade 12 Denis Morris Catholic High School student.

"It's really messy and sticky," added classmate Katelyn Trudel. "You'd only do it 15 minutes and it felt like three hours."

For much of the fall, the small class of senior students has toiled away in a kitchen at the Holiday Inn and Suites Parkway Convention Centre in St. Catharines, canning a ton of food.

Think 70 bushels of tomatoes, 15 bushels of peaches, 20 of beans, 10 of Roma beans and hundreds more pounds of beets, onions and hot peppers.

"I just say yes when a farmer asks if we want them," Gretzinger said.

In addition to teaching his students the art of preserving, Gretzinger is giving them a lesson in philanthropy, too.

"Your conscience feels better," he said.

"You feel great because you're helping someone eat," interjected classmate Shallyne Coelho.

That's something they'll do again next month when the class tackles its next major culinary assignment: preparing a turkey dinner and all the fixings for 800 people at the Salvation Army's annual Christmas dinner on Dec. 14.

Still, despite being grateful there's nothing left to seal in jars this semester, the students did admit their foray into food preserving gave them new perspective on eating well. Some of them said they would even can again for pleasure instead of grades.

The students aren't the only ones learning, either. A chef by trade, Gretzinger said he hadn't done much canning until moving to the head of the classroom six years ago. The experience has inspired even more lesson ideas for his students.

"The last few years, we've done more and more," he said. "Even myself, I'm learning more as we do it. Now I want to get out to a farm and work .. so they can see where (the food) comes from."