Why we need supply management 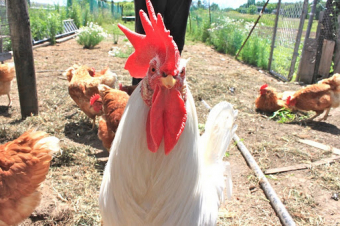 It was a crack made often enough during interviews with some farmers that it almost became a cliche.

Sometimes it was said ruefully. Others merely joked as they lamented the awful year financially that was playing out for their crop when I'd do my annual checks on the season that was. Sometimes, those words were laced with downright envy of farmers who benefit from supply management.

Supply managed produce is different from most commodities, where price fluctuates from year to year or more frequently, depending upon what happens elsewhere in the world. If there's a bumper crop of wheat, say, in Russia, well, farmers here likely won't make as much money on their wheat, especially if it's a bountiful harvest, too, because there's more supply than demand.

If one nation experiences drought, then prices farmers elsewhere receive will go up as demand for that crop increases. Such is life on the world market.

Supply management means supply and demand being more in line with each other. Quotas are set, dictating the amount of a commodity that's marketed. What's demanded is what is produced and vice versa. It means stable pricing for the farmer, often set in advance of a particular crop year, taking into account input costs, so the farmer's finances aren't a big question mark. In short, it means more restful nights for those farmers who produce supply-managed commodities.

In Canada, that's poultry (the meat and the eggs), dairy and tobacco, though, to be honest, I'm not sure if the quota system for golden leaf has been dismantled entirely. I lost track after leaving Norfolk County seven years ago, though the domestic tobacco industry virtually went up in smoke soon after.

Supply management also means steep tariffs on imports, making it less lucrative for other nations producing the same commodities to try to break into the Canadian market.
Having reported on agriculture for 10 years now, I support supply management.

That's not to say it isn't a system without its problems.

For starters, quota is through-the-roof expensive, making farming of these commodities — and the security that producing within a supply-managed system brings — a pipe dream for many. Young dairy farmers, for example, need millions to buy in and their parents aren't willing to let the farm go for a song, even to their own children. It's cost prohibitive for the next generation of farmers to enter the field.

Shutterstock image of a turkey

Supply management also limits choice for consumers. Enter the disclaimer: I don't eat meat and I don't consume cow dairy. I do buy eggs outside the quota system, from a farmer who has a couple dozen birds she treats like pets. But when the Turkey Farmers of Ontario moved to ban outdoor access to birds, effectively ending large-scale organic, free-range turkey production three years ago, I couldn't help but feel that decision was based on science that padded conventional producers' bottom line and not the sounder findings with regard for animal behaviour and welfare, or consumer preference

The decision basically sent the message to consumers that they aren't smart enough to decide what they want or what's best for human or animal. Those who want organic turkey can still find it, but the search is much more difficult and the options few and far between. More times than not, it means settling for the questionable Butterball in the grocery store because there really is no choice. (Hey, there's always Tofurkey).

In the animal welfare department, there's room for improvement in supply-managed commodities.

But I also believe that, in a country without a national food security policy, supply management provides some level security, at least in its respective commodities. So it was with some serious trepidation that I absorbed the news this week that Prime Minister Stephen Harper announced Canada's formal interest in joining the Trans Pacific Partnership.

If Canada joins up, it could mean the end — or at the very least, some serious loosening of the rules — of supply management, which has long kept us from being part of this current quartet of trading partners.

That doesn't bode well for our food security. Right now, the dairy and poultry on our store shelves is produced in Canada to meet Canadian demand. When you pick up a jug of milk, you don't have to worry about it coming from China or even the U.S. That moo juice came from within your local milkshed, within roughly 100 kilometres of where you live.

Ditto for poultry and eggs — no imports at the butcher counter, though the cuts may be from farther afield than that glass of milk you drank today.

Scrap supply management, though, and those farmers will deal with the same uncertainty that beef, pork and grain growers deal with when it comes to the prices they're paid for their hard work. That means serious peaks but also despairingly deep valleys, depending on what goes on elsewhere. Talk to a pork farmer about the mass cull of swine just a few years ago to get that industry in line with demand after the bottom fell out and you won't hear any happy tales.

The loss of supply management will also mean more meat, eggs and dairy from places where farming rules and regulations — ultimately, food safety — isn't as strict as it is here. Yes, there are more food recalls now than ever before but when was the last time you returned a litre of milk because it was laced with high levels of lead or took back that dozen eggs or broiler you bought for dinner? In Canada, you'll be hard-pressed.

More simply put, do you want to drink milk from China? If I hadn't already stopped drinking the stuff because of an allergy, that would certainly make me lose my appetite for a tall, cold glass of it.

So yes, while joining the Trans Pacific Partnership might mean more job security for those toiling away in our factories producing widgets, what good is that if the safety of our food supply is put at risk? Sick factory workers are no more productive than unemployed ones.

At the moment, the Canadian Restaurant and Foodservices Association has launched a PR war against supply management. The argument for scrapping it: it will mean cheaper poultry and dairy for restaurateurs and, ultimately, consumers.

But at what cost will this cheaper food come if supply management is done away with? We're so used to paying less than what our food is worth that we are spoiled as a nation and clueless, to boot. We have no idea the true cost and value of our food.

Even if supply management was scrapped and CRFA members reaped the benefits of cheaper chicken, less expensive eggs and marked down milk, don't think for a second those savings will be passed on to you, the diner. It means more profits to line restaurateurs' pockets.

And again, I play the food security card. How do these dining establishment operators expect to have enough of those crucial ingredients for their eggs Benedict or rubber chicken dinners if one of our supplying countries ever shuts its doors to us to take care of its own people first?

Why should we support local restaurateurs if they don't want to support their local farmers? The CFRA needs to remember we're all in this economy together.

Though supply management is not without its faults, Canada needs to ensure that its farming future includes maintaining those quota systems we already have in place.

Otherwise, it will be more than the beleaguered beef farmer or fruit grower lamenting not having it. We as Canadians will all rue the day we let it be plowed under.