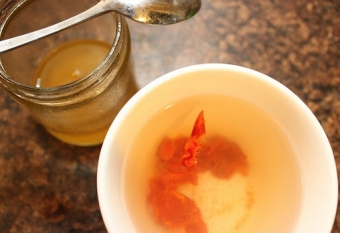 We decided that both activities would be our own — we wouldn't feel obliged to invite the other along, nor would we feel offended if we got snubbed so the other could spend time doing his or her respective pastimes — after I dragged Steve on a hunt for wild garlic in spring 2010.

The allure wasn't there for him as I wrested the tiny bulbs from the ground. While I felt what I imagine it might feel to win the lottery — OK, maybe not the grand prize but something — Steve was bored.

"You don't have to take me with you anymore," he politely told me when I finally stopped, seeing him languish while I loved every moment.

So, I'd venture out alone, slicing into the earth to uproot wild carrots and the like while he made every effort not to slice his ball on the golf course.

But admittedly, there are some places that concern for my safety has kept me from exploring and harvesting on my own. Hey, I was a reporter. I know where the hot spots in St. Catharines are and unfortunately, they're some of the most beautiful and loaded with wild foods.

This week, though, I could tame those fears, thanks to forging a foraging friendship on Twitter with @foodsnark, who lured me to locales I'd only written about in police pick-ups with a photo of branches tipped with bright red rose hips.

With baggies in hand — his, stoop and scoop satchels snatched on a recent trip to Germany — we headed into uncharted territory in search of a fruit that has been the apple of my eye since my trip to Deutschland in May. That's when my aunt Sigurn enlightened me to all the edible parts of her hansa rose bushes, including the hips.

My haul of rose hips.

We hunted for those berry-like seedpods loaded with future generations of flowers, tons of flavour and vitamin C levels that make an orange green with envy. (Rose hips are also touted for fighting infection in the kidneys, bladder and urinary tract and boast vitamins A, B, E and K).

Mine were destined to be seeded and dried for tea. Foodsnark's would be reincarnated into a Gewurztraminer-rose hip jelly. Jam and syrup are also options for these oblong lovelies that are more pulpy than juicy, more tangy than floral and dullards in the scent department, compared to the blooms that bore them.

Tonight, I enjoyed my first cup of rose hip tea. I made sure I breathed deeply, swished every sip in my mouth and gazed fondly into my cup at the floating fruit, now rehydrated and sweetened with honey.

I don't usually drink tea like fine wine but this stuff begs for it, if only because of the work involved. Rose hips are demanding divas.

Seeding rose hips is a labourious and delicate proces

They're small and packed with tiny seeds and hairs that have to be removed because they can cause stomach irritation. What's left is a mere shell of the bulbous fruit that beckoned me to wilderness unknown in the first place.

To say this was a tedious task makes it sound more exciting than it was. It was a long process, seemingly fruitless as it took more than mere moments to get just half a small cookie sheet filled with my now flattened, seeded flower pods.

After an hour in the toaster oven on 150C, I had what looked like scraps of sun-dried tomatoes but would be the makings of my next cup of tea. And the fun isn't over yet. I have more than half my hips to process. They're in the freezer for a day when motivation is running high.

But tonight I steeped the dried fruits of my labour (leaving them in my cup for maximum flavour), added honey and savoured the offspring of a flower that has as much substance as beauty. It was tangy and tart. Refreshing.

With each sip, the tedium of seeding seemed more worthwhile, fading to (almost) forgotten. Yes, I'm seeing that part of the experience with rose-coloured glasses.