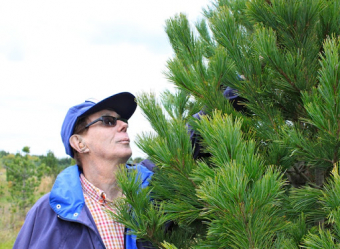 There's no hiding it.

Rhora's Wainfleet nut farm and nursery is organic and the forest of weeds shrouding his youngest seedlings and saplings destined to be planted in locales around the world are a dead giveaway.

"I had someone here from the CFIA and she looked around and said, 'Yup, you're organic,'" Rhora said with a laugh.

But Rhora's weedy ways are for more than convincing the food safety watchdogs that his work is above board.

Those towering goldenrod, lanky milkweeds and other herbaceous interlopers are Rhora's irrigation system, collecting the dew to trickle down and keep his seedlings' roots moist.

"The more the better," Rhora said about his weeds. "I'd rather have it looking a little messy than have it ruined for future generations. The neighbours grow corn and soy. All they do is spray."

Rare ornamentals, such as the Japanese empress oak, sweet gum and basswood, also have roots on his farm.

And 10,000 young incarnations of each of them — none of the grafted to boost their chances of survival — are nestled amongst thickets of plants most farmers would see as pests.

"I have a map to where everything is," he assured.

Rhora is one of a pair of nut farmers that Niagara can claim. His is a crop he got into thanks to one part pragmatism and one part curiosity.

His father, who also farmed, was keen to grow cereal crops but that didn't make sense to Rhora.

"To buy the equipment was expensive and I had to pay for people to harvest it," he said.

That didn't leave much in the way of profit, he noted.

So he came up with a nutty idea after doing some reading on nut production. Rhora gathered few samples from a local farmer and set about planting them to see what would happen.

Since then, his farm has produced dozens of varieties of tree nuts and nut trees that have been sold around the world —  some growing as far away from his home in this quiet south Niagara hamlet as New Zealand.

His paw paws and persimmon are sold to local restaurants on the condition that after the fruit is eaten, the seeds are returned so Rhora can propagate future generations the unique fruit, one similar in texture and taste to a banana, the other like an apricot with a citrus kick.

A cone ready for harvest

His specialty, though, is edible pine nuts, a niche market for foodies and locavores. The downside: it's not touted as a commercial crop, which has spiked a potentially huge market for this agricultural innovator to sell his seedlings to aspiring nut growers. Still, that doesn't stop Rhora from devoting a fair share of his 35 acres to 13 different varieties of pine nut-producing conifers.

He has no problem opining about the merits of his decision.

"We're importing $30 million-worth of pine nuts each year. Why not grow them here?" Rhora said, noting some of those bins at the bulk food store teeming with the tiny soft white nuts can be sitting around for months.

Rhora is in the midst of harvesting of his prized pine nut crop at the moment, some to be sold in their shells for eating, others to be used to seed future generations of saplings for sale.

"(Pine nuts) are fresher in the shell. The ones you buy in the store could be a year old. In the shell, they keep their juices and all the things that are good for your health," he noted.

Harvesting is a labourious task, coaxing between 60 and 100 nuts out of each cone that takes two years to develop and produce`fleshy bits.

By 15 years old, each pine tree produces about a bushel of cones.

It's worth it, though.

"The more they develop, the more interest I develop in them," Rhora said.

"There's more nutrition in them and their better for your heart and health as well," he added. "Mind you, any nut is good for your overall heart health."

While he clearly welcomes weeds on his farm — Rhora has even applied for official organic certification for those who can't make the trip to Wainfleet to see the natural growth — his real enemies are those who love nuts as much as he does.

Rabbits and their penchant for tree bark in winter are also a going concern.

But for every furry rodent and big-eared bark lover, Rhora has built-in pest control sweeping in from a nearby woodlot: hawks.

Still, for as much as Rhora can wax pragmatic about raising nut trees in harmony with nature, he can also wax philosophical.

This is more than just a job for him. Rhora is simply nuts about nuts. He hasn't met one he didn't like.

He can rhyme off the idiosyncrasies of each variety with ease.

His Korean pines: "In the springtime, they have a nice blue colour to them, like Colorado blue spruce. It's quite the sight to see."

Still, it doesn't matter what kind of nut tree it is, Rhora can find the good in them all. So can the people who plant his seedlings in their own orchards or yards.

"I get lots of compliments on how the trees are doing. It's a good feeling," he said. "Plus, I like working with trees. It's therapeutic. The time flies. There's just the interest and it takes my mind off other things."