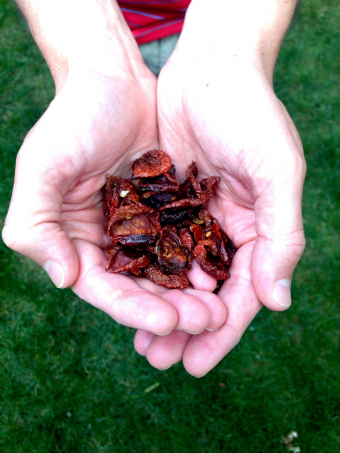 Looking out the window, it's easy to get nostalgic for summer.

That glorious sunny season has been over for slightly more than a month but today's grey skies and dreary drizzle make it feel like it has been gone forever. There are still signs of summer thanks to a few stragglers — the hangers on, just like me — in my CSA baskets. I still get tomatoes, though these are distinctly fall fruit. They're tasty but fleshier, less juicy than their summer counterparts. They don't burst with the same liquidy bite or sweetness they do in August. Still, I'll take them because they beat the cardboard-like orbs that will appear on grocery store shelves soon, signalling the start of my tomato fast until next year.

Good thing tomatoes are the one local food item I have consistently made a point of preserving year after year. I like to think that what's stashed in my cupboard from my preserving efforts a few weeks ago is a tomato trifecta — summer captured and immortalized three ways in mason jars and freezer bags. When I got my usual bushel of toms this year, I had high hopes of making sauce again. But once I got started, I remembered that no matter how much I love to eat the stuff come December, I really don't enjoy jarring it. Peeling tomatoes sucks, quite frankly. It's messy and tedious and come sauce time, I lament my lack of a food mill and try to remember to ask for one come Christmas. This year, I've taken to writing that down as a note to self, since clearly, come December, when my canning experiences of August are but a distant memory, so, too, is my desire for a food mill.

I managed to jar three litres of sauce before I decided it was time to regroup. I had to hurry, though, because the hordes of fruit flies that had taken to camping out in my kitchen catcher were migrating to my box of tomatoes, which were languishing with each passing day that I laboured to decide what to do. The winning fates for my tomatoes turned out to be oven-dried editions and conserva. And the only reason I'm writing about this now — long after the opportunity to preserve these puppies has passed — is because I have reached for both versions frequently since their creation and have been grateful for their existence every time. Every bean I've pickled, jam I've made, sauce I've served doesn't compare to these two additions to my preserving repertoire. The conserva, a fancy name for tomato paste, came my way via a suggestion on Twitter and a link to a brilliant recipe. Just be sure to keep an eye on it while it's condensing in the oven if you decide to try this. Some of my conserva wound up a casualty of my distraction and got burned and caked onto the pan.

But what I could salvage is zippy and boasts such a fresh flavour that I fear the upcoming winter sans fresh tomatoes a little less. The real coup for me is my oven-dried tomatoes because they are just so damn good. This is the easiest way to preserve them but it does require a lot of patience and even more self-control to keep from eating every single shrivelled tomato that emerges from the oven in one sitting. It also requires kicking the guilt reflex to the curb while scooping out the innards and dumping them, worrying that I'm wasting such precious bits. Next year's project will be finding a use for those. Still, the result makes me forget all that. These tomatoes are like jerky for vegetarians. Chewy and satisfying. Salty and sweet. And oh, so tomatoey. They are like candy. For every one I put on a pizza, I eat three more. They're addictive and more flavourful than any sun-dried version I've bought in the store. They are summer sealed in time.

The tomatoes that work best are the uniformly shaped fruit, not the bulbous, misshapen oddballs. Save those for salad or soup. Small to medium-sized toms work best for oven-drying. Cut tomatoes in half lengthwise. Scoop out the innards and lay on an oiled cookie sheet. Sprinkle with salt (I used a coarse sea salt). I kept mine in my oven at the lowest temperature setting — I think it was 150F — for between eight to 12 hours, removing the small ones after eight hours and leaving the larger ones to dehydrate longer. Make lots because they'll disappear before you know it.