Five things I learned from my garden 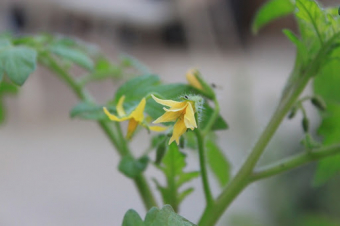 I finally did it.

I finally let go of the summer that was. Annuals have been yanked. Tomato plants promising no more fruit have been tossed. Pots have been dumped.

With the exception of some lettuce and the perennials, my garden is ready to take the winter off and get its beauty sleep before being reincarnated in 2012.

Truth is, I've been planning next year's edition of my tiny allotment since June. Just a few short weeks into the growing season, I already knew what I would do differently 12 months later. I can't help but think my visions of gardens future helped along the summer more quickly than I would have liked.

Still, I heeded what my half-a-postage-stamp plot taught me this year as I let it take its course in this, my third growing season as an official gardener. Much like the two years previous, there was lots to note.

5. Just when you think you know someone

Peas grew well for me last year. This year, not so much.

Yup, it's true. Just when I thought I had my garden figured out, its idiosyncrasies memorized, its quirks chronicled, I realized I don't know it that well at all.

I mean, I know that certain parts of my dirt patch get a maximum six hours of sunlight each day, broken up by shady intervals as the sun makes its way across the sky, over the looming silver maple in my yard and casting its rays around the greenery in my garden, sending shadows every which way.

But I forget that where the sun hits — and for how long — changes as the growing season wanes. So what gets lots of sun early in the season gets scant rays later on.

I also seemed to have more of a drainage problem this year, a problem that has bubbled to the surface as my newly built condo complex and surrounding yard has settled and shifted into place.

Dear garden, you are a tease. You toy with me, tempt me with your sunny bursts, then leave my plants languishing and my dreams of being a true greenthumb dashed.

I will build up my soil next year, allowing for better drainage and I have mapped the sunniest, shadiest and wettest spots. I'll read you like a book yet.

My first attempt at gardening happened in 2009. It was wet and cool most of the summer.

I planted five tomato plants, which, combined, provided me with one tomato. I wanted to throw in the trowel. But alas, 2010 came along.

It was, by all accounts, the perfect growing season. It was sunny, hot and had timely rains.

Why, I could garden after all. In fact, I think I got a little cocky when my Pinot Noir pepper plant proved to be a prolific producer and my pink Zapotec tomato sprouted ruffled orb after ruffled orb

So, when the 2011 growing season rolled around, I was undaunted when the soggy spring brought back memories of 2009.

But then there was July, so hot and sunny. And deathly dry. Everything struggled.

My arugula turned to seed quickly once the rain stopped in the spring. The flowers were a delicious peppery treat, though.

Three very different growing seasons in row happened, proving that maiden of meteorology is a fickle creature with a cruel sense of humour.

No two growing seasons were created equally and you never know what you're going to get.

And what I do know is this: garlic, chard and endive grow well for me so I will continue to plant them. Chard, in particular, has weed-like tendencies in my dirt patch no matter what's in the forecast and that's fine by me because leafy greens make me swoon.

This was my second year growing garlic and I have the perfect spot for it — the sunniest in the garden, as a matter of fact. This year, I got large heads and dreamy scapes. By the time I pulled them in July, there was still enough time to plant endive/chicory in its place.

I got voluminous leafy heads of this mildly bitter green that made for salads and sadness when the last bunch was harvested.

It was my uncle in Germany, the former town gardener in Zweibrucken, who suggested I grow endive after I whipped out the German-English dictionary to help me meticulously describe the growing conditions of my yard and pick his brain for good crops.

The choices were scant. But I — ahem, he — clearly picked the winner.

My endive. Ain't she a beauty?

I grow a lot in containers. They're great for reeling in my mint and have turned out to be perfect for potting my determinate tomatoes, urbikany and punta banda.

My tangle of rosemary. I love this herb. It smells gorgeous and grows like a charm for me. And it's a perennial. Makes job easy as a gardener.

Because of all the cool shade my silver maple throws, containers are ideal for following the sun. Still, some of the heat seekers didn't do well despite my conscientious tracking of every move of that great ball of fire in the sky.

Eggplants turned out to be a bust. I only got two fruits despite my meticulous watering and fertilizing of an otherwise leafy and lovely plant.

Beets promised gardening greatness in their early days, germinating more quickly in a pots than their in-ground counterparts. But they amounted to nothing, getting baked before ever really getting growing. Cat turds was how I described them when I unearthed their sad state.

So, basil, parsley, mint, rosemary and urbikany for me and my pots next year.

I've had some dismal experiences in the garden (see reference to beets above). Still, every year when the seed catalogues begin arriving in the mail, my curiosity is piqued by pages of unusual and even common veggies that I would be most proud to produce.

My pepino, one of those unusual seeds I got suckered into buying. Apparently, it will give me soapy tasting fruit in year two. Fingers crossed.

Truth is, the best thing about gardening is the anticipation of the harvest and whether I'll even get a harvest. Even though my shady yard makes most plants a little sluggish, I'm always thrilled by my puny tomatoes or the few sprigs of lettuce I get.

The failures — yes, beets, I mean you — well, I just make a mental note to plant something else in their place the next year.

Every year brings with it another season's promise. Only 220 more days until that promise begins once again to unfold.