Farming to feed and take care of the planet 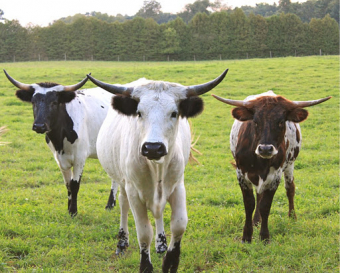 Sometimes I wish elastic-waist pants were the height of fashion.

Not only could I wear them and look like a hipster, I also wouldn’t have noticed my pants becoming tighter and tighter around my belly that was expanding with every bite I took at this year’s annual YU Ranch farm gate dinner.

Hosted on a late September Sunday by Norfolk County cattle farmer extraordinaire Bryan Gilvesy and his wife Cathy, the dinner — a feast, really, because there were six hors d’oeuvres and five glorious and gluttonous courses — was a chance to show off all the good that sustainable farming can do for us as eaters and for the planet. And I willingly ventured outside Niagara to a place I dub Niagara Minor to see Gilvesy’s farm in action.

The list goes on thanks to the talent of Chef Tracy Winkworth, who, on this afternoon that meandered into evening, gave up her usual digs at her Belworth House restaurant in Waterford to cook for about 50 people in a barn equipped with stacks of hay bails and the token barn cat keeping an eye on the action.

I hear the meaty meal was delicious. Much as I think Gilvesy was keen to see if he could convert me — “I’ve had vegetarians who haven’t eaten meat in 15 years come to my farm and eat a burger,” he told me — he and Winkworth made sure no vegetarian was left behind.

Each of my meat-free servings was made with as much thought, care and creativity as my carnivorous dinner companions’ meal. Think pillowy ravioli stuffed with roasted red pepper and butternut squash, bean soup made from local legumes, greens accompanied by a pear poached in Burning Kiln’s Riesling, topped with raw milk Roquefort, parsnip and carrot chips and dressed in a honey-lime vinaigrette.

My main was a brilliant plate of grilled veggies that made my dining companions swoon. But the real stunner of the night was the “peaches and cream” dessert of sweet corn ice cream atop a Norfolk peach and crowned with caramel popcorn and a phyllo wrapped parsnip spear.

My sister, who was my dinner date, made up for my vegetarian ways and raved about Gilvesy’s beef and all its accoutrements, including some of the best local wines to wash it all down.

There were enough tipple to rival any fine dining establishment’s wine list. Between us and the two folks sitting across the long dinner table from us, we had six bottles — a mix of red and white Niagara and Lake Erie North Shore vintages.

Norfolk’s own Burning Kiln Winery, a nod to the golden leaf tobacco industry that built the area, was represented with its amarone-style wines, including its gorgeous peppery, warm Cab “Frank.”

Burning Kiln also represents the innovation and adaptability of Norfolk farmers. They are a resourceful, entrepreneurial bunch unlike any other, who have carved many new niches since the downturn of tobacco. A phoenix rising from the ashes. They are blessed with land and a micro-climate to suit virtually any crop, both of which could make Norfolk the envy of any farming community.

This meal and this day, though, were so much more than a gorge fest.

Gilvesy is an early adopter of ALUS, a catchy acronym for Alternative Land Use Services. The gist of the eco-friendly pilot program is to farm in harmony with nature, not against it. It encourages farmers to take marginal land out of production and let nature reclaim it. In return, farmers would be rewarded financially for their efforts in creating this natural wonderland.

To show how ALUS works on a tobacco farm-turned-cattle ranch, Gilvesy took us on a hike through some of the most pristine countryside imaginable.

First stop: a patch of native grasses and greenery growing in the shadow of an old stick kiln, a nod to Gilvesy's earlier days making a living off the land. As he pointed out the coneflower and Prairie grass, bees flew around him in search of their next point of pollen collection.

“It’s neat to put back the eco-system and farm off it,” Gilvesy said.

With that, he and his sheep dog Gunner led the pack of us food and farm curious into a Carolinian forest woodlot where we all got some insight into the help Gilvesy gets from Mother Nature when working his land.

Standing on a bridge above a cold water stream he has stocked with trout, a sage Gilvesy noted “Farms can serve the purpose to feed us and take care of the environment.”

He explained how his woods flower in both the spring and the fall, providing fodder for bees to buzz around and be the master pollinators they are. He invites them into his fields by creating habitat for them there in old tree stumps. They are as much a part of his workforce as any hired hand.

“Even though it doesn’t look like farm land, you can’t ignore the connections,” Gilvesy said, hoisting some wild ginger plucked from the forest floor. “If you leave with anything today, it’s that farming happens with this land and not because of it. This isn’t a subdivision.”

But we also left full of knowing what good food and wine, produced and prepared with care, really is.

I’m not exaggerating when I say this was the best meal I’ve ever eaten. Gilvesy and Winkworth were feeding people hungry for delicious, real food but also craving a story and experience on the side, both of which made everything taste all the better.

On the hike, we were introduced to some other innovators in their fields – well, Gilvesy’s fields on this day.

Lydia Tomek, winemaker at St. Catharines’ Hernder Estate Wines plied us her piece de resistance, a decade in the making for this 30-year-old vintner.

Inspired by Spain’s sherry, Tomek set about to make her own version of the fortified vino when she was a student at Brock’s Cool Climate Oenology and Viticulture Institute and keen to experiment during her job placement at Hernder.

For 10 years, Tomek ambitiously blended Riesling and Chardonnay, fortifying it with distilled Cab Franc in oak barrels that she moved around the winery, following the sun to create a solera system, a natural baking process that would activate the flor yeasts.

All that work and only recently did she discover “it tasted exactly as I wanted it to … with its own Niagara flare.”

The beautiful amber elixir called Caluroso was released this year – only 50 cases of it – and scored a bronze metal at the InterVin wine competition, where it edged out fortified wines from the country that inspired it and others that have centuries of fortified winemaking experience on their sides.

Caluroso isn’t just a catchy moniker . It encapsulates everything Tomek poured into her prize pet project. It means warmth and heart “which is what you feel when drinking it and the passion that went in to making this,” she explained.

Our appetites whetted, we were finally introduced to Winkworth, who met us in a nearby field of alfalfa and orchard grass. She pulled up in a pickup truck with its tailgate-turned kitchen. She turned out beef tartar in her makeshift food truck (I had some rich eggplant tartare, meaty in its own right) on wood planks, that, if left behind, would only be reclaimed by the earth.

Dressed in a t-shirt emblazoned with the word ‘Local,’ a fork and knife standing in for the L’s, Winkworth explained she doesn’t just serve local food. Her culinary creations are made with the “best-produced local food.”

“Our purpose in our kitchen is to source the best food from the best ranchers and farmers,” she said, standing over a bowl of Gilvesy’s raw sirloin for the tartare.

After that, she has the “easy job” of tweaking it. Whatever she calls it, my normally cooked-meat-preferring sister was dazzled after one bite.

Our ever-shrinking pants could attest to it.