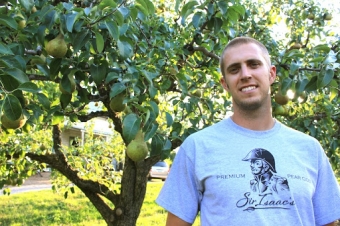 Brock Puddicombe has an easy fix for his pear cravings come this time of year.

The Winona fruit grower can reach for one straight off the tree when making the rounds through his sprawling orchard.

Even when pear season is but a distant memory, he'll still be able to satisfy his hankerings. All he'll have to do is open his fridge and reach for a tall cold one.

Puddicombe is busy bottling his favourite fruit as Sir Isaac's Premium Pear Cider, a liquid gold concoction of Bartlett and Bosc pears that has proven to be a silver lining to a tough blow to local fruit growers.

Turn the clock back three years and CanGro Foods Inc., the last fruit cannery in country, was slated to shutter, closing down a market for much of the Puddicombe family's pear crop.

That meant an awful lot of fruit fated for the fresh market or trees destined to be yanked from local orchards.

"We do try to do as much as we can through the fresh market but because of the amount out there, it's important to have every pear marketable," Puddicombe said.

But about 15 to 20 per cent of the crop of bell-shaped fruit isn't suitable for space on supermarket shelves, leaving tonnes without a home.

"Instead of it going back into the ground or in the field and letting nature take its course, we press them and then put them back in the field (to compost)," Puddicombe said.

The result is a pleasant smelling cider that makes you want to drink it and won't give you a toothache or sugar headache when you do.

The idea to make pear cider had been fermenting since Puddicombe studied at the University of Guelph a few years ago. It came to him on nearly every walk to a party or stop in the LCBO where he would see British ciders on the shelves.

But the impetus to start making cider came two years ago in a post-CanGro world while taking a tour of the British Isles with his sister and winemaker Lindsay.

The duo hit up local cideries for insight and inspiration.

"It was just a matter of getting recipes, the taste profile and smells," he said.

They came home and began experimenting with different pears and yeasts, roping their staff into sampling the goods and being part of the Puddicombe research and development team.

The early samples, though, "were just like every other cider. Nothing stood out," Puddicombe recalled.

Then he narrowed down the pear profile to Bartlett and Bosc and focused on tweaking the yeast.

After three days of more samples and more math, he looked at the numbers of what would become Sir Isaac's — named for Canada's 1812 war hero, General Isaac Brock — and knew from the experience he had squeezed out of his short cidermaking career thus far that he had a winner.

"I didn't put my glass to my lips. I let others try it. I just went by the looks on their faces when they smelled it and tasted," he said.

Three months ago, Puddicombe introduced Sir Isaac to the masses and plans to press as many as 34,000 litres this year for his newly founded Puddicombe Cider Company.

By early September, he'd already sold 2,300 litres and was working on getting Sir Isaac's on shelves at the LCBO. Right now, it's only available at the family's farm, in their Puddicombe Estate Winery shop or by the bottle in a few local pubs — something that gives Puddicombe a real kick.

"When you see someone you don't know having a bottle of it, it kind of feels like victory," he said. "I don't have kids but if your kids were to succeed in something, I imagine this would be that feeling. Your hard work pays off."

If you make the trip to Winona for a six pack or two, just don't mention that other fruit when sampling some.

"When someone tells me they smell apples, I almost get offended," Puddicombe admitted. "I don't want my product to smell like apples. I want it to smell like pears.

"It's crisp, it smells perfect and it's so easy going down. The palette is there. It's perfect in my opinion."

But the critic Puddicombe was most worried about convincing was his father, Murray.

The patriarch of this entrepreneurial farming family was a little reluctant to see his son pour his heart into the cider business if only because it isn't the usual drink of choice for Ontarians. Cider has only recently been gaining ground among the thirsty masses.

Puddicombe recalled that after a sixth night of pressing pears, a skeptical Murray asked him how much cider he planned to make.

"He said 'What?' But it was 'If you build it, they will come'," Puddicombe said.

Now Murray gives away more six packs than anyone else and is often overheard proudly telling people about his son's latest accomplishment.

"Between a father and son, you don't really say 'I love you.' You look for the signs," Puddicombe said. "He's your tough farmer."

With Sir Isaac's leaving the farm faster than an American surrender in the War of 1812, Puddicombe is starting to think about what other fruit he can convert to drinkable form.

Mostly, though, he's content to take stock of the fermented fruits of his labour.

"I want to crawl before I walk. I only want to do pears right now but there are so many peaches walking the streets looking for a home. The coolers are full," Puddicombe said. "I really wish I could run or sprint and do peaches but I really want to focus on Sir Isaac's. Not to mention the two years of research and development — I kind of want to enjoy this."