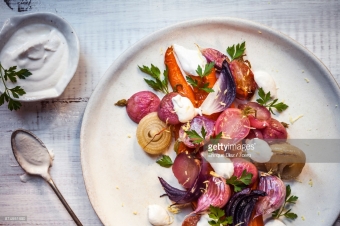 No kidding, David Johnson has some real workhorses employed at his winery.

A whole flock of hired hands — er, hooves, to be exact.

The winemaker and proprietor at Featherstone Estate Winery has about 40 sheep working for him this summer, the fourth summer he has brought in four-legged labour to chew through a big job on Johnson's to-do list.

The sheep eat all the basal leaves off the grapevines in this vineyard on the crest of the Niagara Escarpment in Vineland.

I know much has been written about the Featherstone sheep over the years and other wineries have followed (wool) suit by employing their own flocks, but I couldn't resist the chance to get up close to these roaming ruminants when I found out Featherstone was offering "Meet the Sheep" tours. I'd never come toe to cloven hoof in my days as an ag reporter; this story going to our intrepid wine industry reporter, Monique, instead. And, I'll admit, I was jealous, though a bit squeamish when vegetarian me found out the fate of these fellas when their job was done.

"The lambs go to market, which does not mean they go shopping," Johnson told our group of wine lovers and sheep curious on Sunday.

Still, I was grateful for the introduction to these lovely lambs — and explanation — which is as follows in case you haven't herd. Ahem, heard.

Removing the low-hanging leaves on grapevines where the fruit hangs is critical. It allows "sunstrike on the grapes," boosting the berries' flavour, reducing humidity and in the process, eliminating the risk of crop-wrecking mildew.

"They graze as high as they can reach and strip everything off," Johnson said.

But to hire the usual farm labourers to do this backbreaking work was costing Johnson $400 an acre and there are 23 acres at Featherstone to cover.

He also had the option of using machines for the job, but with that comes the risk of compacting the soil. That keeps the roots of the vines from spreading, which ultimately affects the flavour of the fruit, Johnson explained.

Mechanization also isn't in keeping the winery's ecologically mindful philosophy. Featherstone doesn't use insecticides and you also won't hear a single bird banger — they make gunshot-like noises to keep birds at bay — during a visit. Instead, they use a Harris's hawk named Amadeus. The diminutive bird does a good job of scaring off grape-grabbing birds on his own, protecting the seven varieties grown at Featherstone.

Johnson got the idea to use Southdown lambs for leaf trimming while spending time in New Zealand in 2007.

"New Zealand is really on the cutting edge for the winemaking process," he explained. "They really live and die on the quality of their export wine so they do some very cool stuff."

They also have lots of sheep — about 15 for each of the 4 million Kiwis — so free four-legged labour is plentiful.

The lambs, which Featherstone gets from a sheep farmer in nearby St. Ann's, are born in March, putting them at about 22 inches high when they arrive in the vineyard in early July. That's roughly schnoz level with those grape-covering leaves that need to be removed.

Johnson started four years ago with five lambs in five rows of Riesling (the Featherstone edition of this wine is aptly named Black Sheep and it's beautiful, loaded with green apple notes, light and crisp). It took them all summer to munch their way through the work.

"And they did a great job," Johnson said.

So much so that he invited about 35 of their friends to return the next year to do the entire vineyard.

The end, sadly, is nigh for this year's flock. Their work at Featherstone is done for another year, a fact that made my bottom lip stick out and wish 40 sheep could fit into my tiny Toyota. Their fate is to wind up on a menu at local restaurants but only on one condition, Johnson noted.

"If the restaurant doesn't buy our wine, they don't get a lamb."