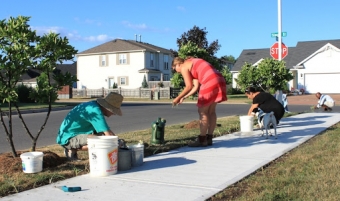 I braced myself for the worst when he sidled up to his fence to ask us what we were doing.

Bad things were bound to happen, I figured as I stood on the sidewalk leading up to the Niagara-on-the-Lake Community Centre last night. Persistent, pressing questions. Annoyance at our answers. Possibly even anger.

After all, we were engaging in guerrilla gardening in a strip of dirt abutting this man's yard, partaking in the unsanctioned planting of chives on town property. It was all in an effort to beautify Niagara-on-the-Lake and make it more edible. And by that, I mean growing food in public spaces that anyone can harvest.

But how would a resident of the "prettiest town in Canada," with its stately homes and manicured lawns, feel about such civil disobedience, even if we thought it only contributed to Niagara-on-the-Lake's reputation for being so aesthetically pleasing.

I held my breath as someone in our small but mighty group of six guerrilla greenthumbs piped up with an answer.

"Oh. That'll smell great," the man replied, a smile spreading across his face.

"Chives — they go really well with potatoes," he added.

I took that as an endorsement of our efforts to plant hundreds of the perennial allium along the freshly paved walkway on Anderson Lane.

It was a project started earlier this month by town resident Melissa Hellwig. I tagged along to help and we got a fair stretch of the garlicky spikes planted. But we had a whole other side of the walk to line with the edible greenery.

Our earlier plantings didn't appear to be faring too well, what with no rain to help them along and what appeared to be a date with a weed whacker. They looked pathetic but also determined to withstand the whipper snipper, some green shoots still evident.

This time, though, we had four others join us in our efforts of getting the chives into the ground. They were tenacious, not wanting to leave until every last bit of dirt was home to some herbs, and they made Chive Walk official.

And soon, someone will be eating the fruits of our labour with potatoes.

I bet they'll be delicious.