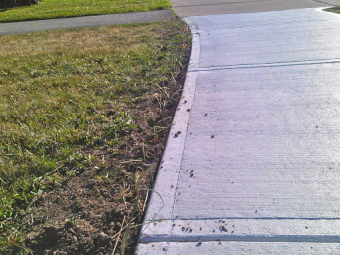 It's tough to tell from the photo but if you look closely, you can see the spiky sprigs of chives lining that gleaming swath of cement sidewalk. They're chives that were planted by me and Melissa Hellwig last night in the trail of sun-baked dirt lining the footpath that leads to the Niagara-on-the-Lake Community Centre.

We met after work to make Hellwig's vision of a more edible town a reality. She has already planted Jerusalem artichokes in a naturalization area near the centre and has visions for growing more good eats around town, which locals can harvest as they want and need.

Though I had to leave after an hour, my finger nails jammed with dirt and dreams of being a hand model dashed, Hellwig and I planted about 50 feet of the garlicky, grasslike herbs along one side of the walkway. When I left, she was determined to finish the stretch with her Jack Russell-Beagle named Hobart to keep her company and a wagon in tow that was full of chives waiting to be planted. That would have left about 75 feet of chives to grow into Chive Walk, which is what Hellwig has named her pet project.

There are plans to return to line the other side of the pavement soon. Guerrilla gardeners, stay tuned and keep those spades ready. We can use the help.

Meanwhile, fingers crossed for some rain and growth spurt.