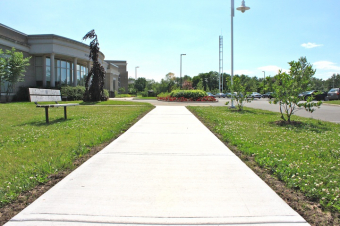 Chive Walk has a certain cachet for Melissa Hellwig.

When she hears those words, she envisions the freshly poured sidewalk leading to the Niagara-on-the-Lake community centre lined with the garlicky herb, ripe for the picking by anyone who wants a few sprigs.

It's not that Hellwig is anti-chive. Instead, she's pro-food security and keen on the idea of using as much public space as a municipality can muster to plant edibles rather than ornamental flowers.

Inspired by Incredible Edible Todmorden, a movement in an English town that has seen fire departments, police stations and schools plant fruit trees and install raised-bed gardens wherever they can make the space, Hellwig sees Niagara-on-the-Lake as fertile ground for a similar movement.

In Todmorden, schools have started gardens in neighbouring cemeteries, growing chard, lettuce and other greens on top of graves. Commuters hopping off the train can snip fresh herbs from pots on the platform to take home for supper. The hospital has apple trees blossoming in its yard, playing on the old adage about staving off white coats. The town has 500 edible gardens — and counting — in public spaces and everything is labelled with plant type and ideas for how to use the harvest.

The point is to increase the amount of food grown and eaten by Todmorden residents with the goal of becoming self-sufficient by 2018.

Back in Niagara-on-the-Lake, Hellwig has already done some guerrilla gardening to get her MSA — Municipally Supported Agriculture — started. Jerusalem artichokes, a native flower with knobby roots that make a perfect substitute for potatoes, are already sprouting along the perimeter of the community centre's property.

Chive Walk is next on her to-do list. So is turning the former lawn bowling green on Regent Street into a community garden. She has already submitted her proposal to the town, which, earlier this year, issued a request for expressions of interest in the property.

Citing statistics in her proposal, including the US Department of Agriculture figure that 15 per cent of the world's food is now grown in urban areas, Hellwig has her fingers crossed as she awaits council's decision on the fate of the lush lawn.

Niagara-on-the-Lake, she noted, is one of the few local municipalities that doesn't have a community garden and there's no reason it shouldn't.

"Everybody's assumption is we live in a food basket. I'd like to work out how many people live in Niagara and how many acres of arable land there are," Hellwig said. "What grows here and what do we get? Everybody assumes there's enough food here and why worry but what's the reality like?"

Hellwig figures another reason Niagara-on-the-Lake has been slow on the community garden uptake is because of the association of community gardens with a way to help alleviate poverty.

"That's why they're not floating in Niagara-on-the-Lake because nobody needs them," she said. "But for every pear we export (from Niagara) we import 60. We're essentially a food desert because we send all our food across or out of the country and then import it."

This isn't Hellwig's first pitch for a plot for people to use to grow their own food. The Sustainability Network's community garden team got $500 from Niagara Region in2009 to get one growing. But the group was turned down repeatedly because of concerns about liability, aesthetics and access to water.

Melissa Hellwig is proposing that the Town of Niagara-on-the-Lakes allow the former lawn bowling green be converted to a community garden.

Hellwig is certain those arguments won't be rooted in much at the former lawn bowling club. Still, she's only asking for a two-year pilot to start. If it works, she envisions the town taking it over, the garden run by a board and people eating grub they've grown.

"If it doesn't work, take it out. No one's hurt and you can put up condos," she said.

"In the meantime, I'll look for more places to grow stuff."