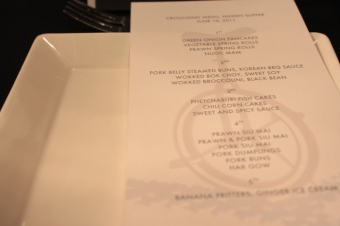 The cryptic email suggested I was special.

Told me if I just accepted the invitation being offered that I would be fed. It didn't say what. It didn't say where. It didn't even say by whom but when the latest offer oozing such intrigue landed in my inbox from the Kickstand Supper Club, I couldn't say no. I had no freelance hell from which to emerge, no trip for which to pack — both had kept me from accepting previous propositions.

With no excuses to hold me back, I didn't hesitate to reply that I'd attend Crouching Menu, Hidden Dinner, wherever and whatever it may be.

When the second email came, this one with photo directions to where I'd be dining, I started to wonder if maybe someone had it in for me. An arrow pointed to a loading dock behind the boxing club on Niagara Street. Not exactly the kind of place that one associates with dinner. Or a pleasant ending.

But I was still game to get the scoop on the Kickstand Supper Club this past Friday. Turned out, I was going to be dining in a lighting warehouse. There, tucked between two towering shelves filled with stacked boxes of all things illuminating was a long and stunning table set for about 30 people. Black muslin covered as much as possible of the shelving units loaded with lighting stock. Flowers held fast in a dotted line down the centre of an elegant table, all against an industrial backdrop that included a cameo by a forklift summoned to unload a truck that pulled up to the dock as guests arrived and mingled.

In a dark corner of a place I would never have reason to step foot in otherwise, a fluorescent light shone like a beacon and under its glow, I could see the creator of the night's nosh — fast becoming a very familiar face in Niagara's culinary world — working hard at putting the finishing touches on an Asian-inspired menu. I couldn't wait to eat.

After we all took our assigned seats — couples and groups of friends were split and scattered amongst the other guests, forcing us to interact instead of eating in insular coupledom — the masterminds behind the Kickstand Supper Club introduced themselves and welcomed us to a night intended to be as "casual and unpretentious as possible."

In between courses at the Kickstand Supper Club.

Modeled after the supper clubs in big cities, Kickstand is almost like a secret society of food aficionados who gather in unlikely and roving settings revealed only when a spot around the table is reserved. They eat gorgeous food from a set menu and shoot the breeze during a relaxed, drawn-out evening. Really, it's just a way to have a fantastic meal the way it's supposed to enjoyed — in the company of others — but with a side of surprise and mystery.This underground foodie faction may sound elitist but in Kickstand's case, it's not. The folks behind just aren't that type.Once you learn their identities (I've been asked to keep it under wraps), it's really no surprise. Kickstand is the work of people who have brought an excitement to local dining that, while there's no shortage of wonderful options here, is typically safe. Conventional.They are revolutionizing the local food scene, taking it out of white linen restaurants — or any restaurant for that matter — and bringing it to an appreciative audience in unexpected ways. The hope is to host Kickstand suppers monthly and possibly more frequently in the winter.

For more than four hours, I filled up on green onion pancakes, Chinese broccoli greens, fish cakes, chili corn cakes, prawn siu mai and har gow (dim sum). It was easy to be floored by the flavours — the bite of the ginger, the brightness of the kaffir lime and lemongrass, the sweet and the salt at play in the nuoc mam, which was our dipping sauce in the first course.

Sitting in the midst of a winemaker, iron man hopeful and market researcher, the conversation was just as compelling as the food.As more people experience a Kickstand Supper Club evening, I have no doubt it will be harder to get a spot around the table.

That enigmatic email told me I was special, but really, the night was.