Beauty, booze and food + a recipe for Rosenbowle 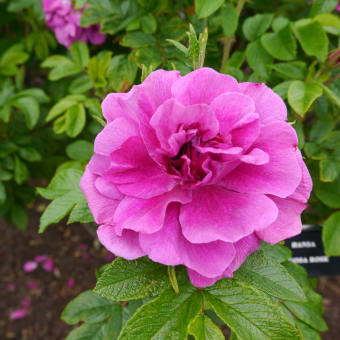 Rosenbowle is one of those summertime-anytime drinks, despite the sense of ceremony it offers with its mixture of rose petals and sparkling wine. It's a drink for which I have much fondness because of the good memories as much as the good cheer it brings.

This ode to Rosenbowle is nine years old.

I was reminded of it earlier this week when I saw an Instagram post from Restaurant Pearl Morissette showing hands scooping up rose petals and a caption telling all that would be done with them.

It was a bittersweet moment because Rosenbowle was the late spring/early summer beverage shared with me by my aunt Sigrun on those visits that I brilliantly timed to include both Spargel season and when Sigrun's Rosa rugosa was in full bloom in Zweibrücken, Germany. I only know the Latin name of the Hansa rose because of my uncle Eckard, once the town gardener for Zweibrücken and host of his own gardening show on TV. He was a man who chastised you for being late for your 9 a.m. appointment with him if you showed up at 9 a.m. spot on. He had no patience for such tardiness. He was also a guy of tempered generosity with a pot of white asparagus soup.

For a long time, though, at least according to my memories clouded by the cobwebs of time, he was the life of the party. When he and Sigrun came to visit my family in Canada in 1984, I remember how I used Eckard's big belly as a pillow on a long car ride from Kitchener — home at the time — to Niagara Falls. I announced that, when I grew up, I would marry a man with a big belly so I'd always have a makeshift pillow on long car rides or whenever a place to rest my head was required. He still laughed about it the last time I saw him nearly seven years ago, noting the trimness of my husband, Steve, and how that didn't quite match my dreams as a seven-year-old.

Eckard died two weeks ago. He was a bon vivant like no other, but that takes a toll on one's health if we're being honest. And I was reminded of the good times shared with him and Sigrun when I saw that Pearl Morissette post, which then brought me back to this recipe. It's Sigrun's and different than other Rosenbowle recipes I've studied online. But it's special stuff, no matter what, and even more so now.

When I carved out my half-a-postage-stamp plot of a garden two years ago, I did so with visions of chard plants and tomatoes dancing in my mind.

Save for the odd hosta to fill in the shady gaps, my garden would be dedicated to veggies. Flowers need not apply for a spot of earth here. Vegetables were practical — edible — and seemingly, more satisfying to grow than the eye candy of colourful petals.

My perspective changed when I sat down to breakfast on the first day of my German visit nearly three weeks ago. My aunt Sigrun had laid out an impressive spread of breads, meats (for my husband), eggs, cheeses and homemade jams.

The usual suspects were there in her collection of preserves. Strawberry. Apricot. Mirabel plum. But there was one, a deep purpley-pink, that I didn't recognize. It smelled fragrant and just as foreign as it looked. It was the product of no fruit I was familiar with. I slathered it on a piece of bread anyway and smacked my lips at its flowery essence and tang.

Turns out, it wasn't fruit that deserved the credit but the full, blooming bush of pink Hansa roses in my aunt's backyard. I was eating rose blossom jelly. Food made by a flower I had chalked up to being nothing more than a pretty face.

Nearly every day it seemed, Sigrun would pluck 10 full, perfumed blooms, lay them out in a plastic container, add sugar, Cognac and red wine. She'd leave them to marinade in their alcoholic bath on the sunny windowsill in her kitchen. The blossoms radiated the rosiest bouquet, like Airwick rose-scented air freshener, so heavy and syrupy — a parody of what a real rose would smell like. And yet, it was a real rose casting it.

My aunt would strain and bottle the drunken concoction four hours later. It's called Rosenbowle or Ansatz, and when she and my uncle, Eckard, had deemed it time to celebrate something, they would add a shot of it to a glass of sparkling wine, giving the straw-coloured bubbly a magenta tinge and sweet, floral essence. It can also be sipped on its own as a summertime elixir.

The liqueur can be boiled down, too, thickening it just enough to be worthy of being spread on a slice of crusty bread at the breakfast table.

The generosity of the Hansa rose doesn't end there. In the fall, the blooms leave a fruit behind — rosehips — that can also be used for jam.

Beauty, booze and food — what more could someone ask for in a flower. And so my search begins for a Hansa rose bush, a worthy companion for all that chard in my backyard garden.

While Sigrun measured everything for me to write down and share all those years ago, this recipe is an approximation. (We did drink it afterward and it was perfect -- that counts as testing, right?) I really don't know if this is a regional variation or that of a woman with impeccable taste, inherited from her mom, my indomitable Oma Mayer. But it's a joy to drink while take a moment to stop and smell — and sip — the roses.

Cover the roses with sugar, douse them with the Cognac and add the red wine.

Bottle and keep refrigerated until ready to serve.