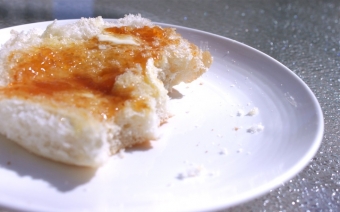 It's not exactly the breakfast of champions.

But a buttered bun, slathered with Beamsville farmer Bill Lenko's apricot jam was one of the most memorable morning meals I've had.

Since interviewing one of the fathers of wine grape growing in Niagara last week and sampling the super smooth spread that the 85-year-old makes with fruit from his orchard, his jam has been a craving of mine and my eating it, an homage to a man I can't help but admire.

I first met Bill and his wife Helen five years ago when I was a reporter covering the Cuvee Wine Awards. Lenko walked away with the big award of the night — the Tony Aspler Award of Excellence. The coveted accolades are reserved for winemakers but Bill made history that night, becoming the first grape grower to receive the honour.

A few months later, I was sitting around the family's kitchen table at their Beamsville farm as they reminisced about their Guernsey cow Bessy, one of several in a line of milkers the family has owned and became known for keeping in their vineyard. They had just sold Bessy, an occasion that marked the end of an era for the Lenko clan. She would be their last cow because Bill had determined he was getting too old to keep up with a bovine.

Then, a few months after that, Bill suffered another loss when his beloved Helen died. I was assigned to write about her and the loss of a woman with a reputation for making pie like no other.

So when I sat across the table from Bill a week ago — the first time in six years — it was like reconnecting with an old friend. One that I can't help but be awestruck by and feel grateful for our lives intersecting, no matter how brief.

He fed me homemade perogies as we chatted about his life, had me sip some of his son's Viognier, pouring out pride in Daniel's accomplishments with each drop of wine that spilled from the bottle.

He gave me a glass of his home-pressed apple juice as a chaser. A pragmatic guy, Bill favours apple juice because it can be easily frozen and kept until he's ready to drink it.

But his piece de resistance was the apricot jam he fed me and then sent me away with. It was strikingly smooth because he purees the fruit. Sweet, not from added sugar, but from the fruit itself. He tries to use as little sugar as possible in his drool-inducing burnt orange preserve.

In the story I wrote about his Cuvee award, he teased that when visitors come to Daniel's winery, they're really coming for his jam. Considering Lenko's wines have received countless awards and his 2002 Syrah was named the best Canadian wine in 2007 by renowned wine authority Jancis Robinson, that says something about Bill's jam.

I couldn't wait to crack open that jar at home and layer it on a piece of bread I deemed worthy enough to be the vehicle to transport the perfect preserve from jar to mouth.

As I sat with Bill and listened to how he talked about all his handiwork in the kitchen, something he's only gotten really good at since Helen's death, I thought of my Oma Mayer, the 98-and-a-half-year-old going concern who I will see in Germany in two days.

Theirs is a generation that lives practically, its pragmatism so seemingly foreign to even the generation that followed them and mostly to my contemporaries. They make their own jam, bake their own cookies — Bill's are made with walnuts from the tree in his front yard and sweetened with honey from the bee colony he keeps — and pinch their own perogies.

It's not anything they think is particularly remarkable. They do it because it's just what they do. Meanwhile, I pickle a jar of beans and think this is some kind of monumental feat.

Monumental is being 85 and wanting to master the art of pie making, like your wife had. It's still pruning your own orchard. It's making your own apple juice.

It's crafting the perfect jar of jam but lamenting that you haven't quite gotten it right and looking forward to the next crop of apricots — the next opportunity — to try to master it just that once.