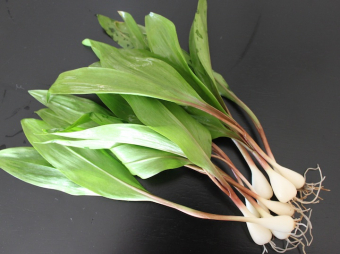 So read the caption on the photo I uploaded to Facebook. It was of a trio of ramps I unearthed on Mother's Day in a south St. Catharines forest.

That one word summed up how I felt. After all, finding the elusive wild leeks was akin to winning the lottery for me during a weekend packed with digging up dandelion and wild carrot on the front lawn of my condo complex.

In all my attempts at wildcrafting, though, I have never found a ramp — that broad-leafed beauty that makes every amateur forager and foodie go ga-ga at this time of year.

My companions urged me to uproot more of the luscious leeks. There were dozens to be had. But in the end, I left with 10, feeling good about my bounty. Mostly, though, I felt good about not giving into the temptation to take them all, leaving behind more than what I pulled out of the soft earth.

Still, that simple photo uploaded with the triumphant push of a button for all my virtual friends to see caused upset for one of them. She even questioned the kind of forager I am.

But mostly, she raised something that I had been wondering, given the wild popularity of this wild edible.

Ramps are on the verge of endangerment, she warned. She then told the horror story of having led a foraging workshop on her land in Beamsville, leading her eager wild foodies to some ramps. She plied them with her knowledge of always leaving some behind, not for the other foragers who show up next week. Instead, she was thinking ahead to future generations of ramps. If they all get pulled, well, they may not grow back next year.

Her conservationist caveat fell on deaf ears. The next day, she went back to that spot and found that it had been cleared entirely. Her ramps on her property.

Two cardinal rules were broken: not leaving any behind for future propagation and not asking the property owner if it was alright to scavenge and scrounge on their land.

OK, I'll admit, while being mindful of leaving behind more ramps than I took, I didn't ask if I could take any in the first place. It was land belonging to a public institution but had it been near a home, I would have gone door knocking. In this case, I didn't know who to ask and was too caught up in my excitement to think about it.

I defended myself in a reply Facebook post but shared in her worry for the future of the much-loved leek.

A recent New York Times article drew similar attention to the issue. It pointed out how much work it is for a ramp to grow and propagate — anywhere for six to 18 months. I felt a pang when I thought about the handful I had scooped up and how much work Mother Nature put into producing those puppies.

Here was some other perspective it offered:

There is no definitive data on whether ramp populations have been damaged, said Lawrence Davis-Hollander, a Massachusetts ethnobotanist. But now is the time to answer that question, he said, before ramps become as rare as ginseng, the medicinal root that used to be plentiful in America’s woods. “At the rate we’re harvesting,” Mr. Davis-Hollander said, “the honest answer is we don’t know the effect we’re having.”

In Quebec, the plant is listed as threatened, and its sale has been banned since 1995.

In Great Smoky Mountains National Park in North Carolina and Tennessee, ramp harvesting was banned in 2004 after a study there found that the only way to prevent damage to a ramp patch was to harvest less than 10 percent once every 10 years. The Eastern Band of Cherokee Indians has argued that its traditional way of harvesting ramps in the park, by cutting off the tips of the leaves, does not kill the plant.

Yikes. Now that's food for thought. If it's a considered weed — think dandelion, lamb's quarters and purslane — then eat to your heart's content. I know in the case of my condo complex foraging escapades, my neighbours are probably grateful. Our lawn is a virtual salad bar as we await a new contract with a lawn care company and a mower blade to meet grass blade for the first time this year.

But when it comes to the ramp, that beautiful symbol of spring, let's exercise some restraint. It will guarantee us some of the tasty lovelies for generations to come.