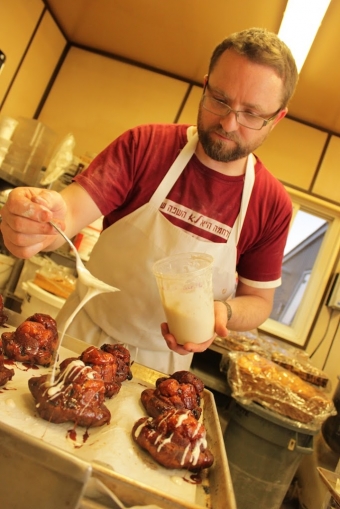 Jan Campbell-Luxton knew she was different the moment they met several years ago.

She had personality. Demanded she be listened to.

She might do what Campbell-Luxton wanted her to. She also had no problem putting him in his place, either. She was the antithesis of the others and their dull, white bread personalities.

She is sourdough and she is a muse unlike any other for this Niagara baker whose de la terre bakery in Vineland turns out as many as 1,800 loaves of naturally leavened bread every week.

“There’s a rhythm to sourdough,” Campbell-Luxton said. “You have to listen to it and taste it and be really attentive to it. You can cajole it down a certain road but you can’t force it. It’ll come back and slap you.”

One bite of a slice of his curvaceous loaves of Niagara Sourdough —with that “beguiling” tang — is reason enough to be grateful that Campbell-Luxton is so willing to put up with his medium’s temperamental ways at his de la terre bakery.

Loaves of sourdough bread, packed and ready for a Saturday morning market in the GTA.

But more than a muse, sourdough symbolizes something else for Campbell-Luxton. Something that he rails against with every bit of dough he kneads, every sack of flour he buys direct from Kitchener Mennonite farmer David Martin and every farmers market where he proffers his pastries. (He sells his bread at markets in St. Catharines, Grimsby, Niagara-on-the-Lake, Beamsville’s Good Food Fair, Hamilton, Ancaster and Toronto.)

Sourdough is a throwback to the breadmaking of old. And to a time before industrial agriculture. Before massive yields and even higher calorie counts were the thresholds of success rather than the quality of those harvests, the nutrients they’re packed with or the state they left the land upon which they grew.

Now both sourdough and small-scale farming are enjoying a bit of a renaissance and Campbell-Luxton, a baker by trade with a background in international development, is doing what he can to make sure both their stars keep rising.

His efforts drawing attention to Niagara’s food bounty and its role as a community builder started nearly five years ago with the opening of the first incarnation of de la terre in Fonthill.

Food and the food service industry, serve as “points of intersection” between consumers and farmers, he said. Still, when Campbell-Luxton started shopping around for restaurant supplies, he realized he could run an eatery void of any such relationship.

Any meal Campbell-Luxton envisioned serving up could come straight from a box via the freezer.

“I was shocked to open a restaurant and learn you didn’t have to cook,” he recalled. “It was revolting and so tied into the industrial food system.”

So he created a space with a window into the kitchen — to do otherwise would hide all the work he would do and, ultimately, the real value of the food he served — and started to spend time sourcing his supplies from farmers that he could deal with face to face. At their kitchen tables, they would set prices free of the fluctuations brought on by speculation. Cheques were filled out with fair prices reflective of the farmer’s work.

“I thought de la terre could be the kind of place to show the world,” Campbell-Luxton said. “I want people to know the good hard labour that goes into food and know that when you come in, you would not see us taking anything from a box.

“People seemed to respond to that. It allowed me to talk about where the products came from ... and allowed me to have the conversations to demystify food.”

With every loaf he makes, Campbell-Luxton kneads in his convictions from his background in international development, his experiences abroad in communities that developed to meet their own needs and his beliefs that a restaurant — his bakery — can link people to their community “to be satiated socially and be connected and enjoy the company.”

His bread is also proof that how a person spends their money exacts influence in the marketplace. If he could work directly with farmers, be part of an alternative food system that doesn’t rely on the food terminal, he might pay more for his supplies but he would also charge more and explain to his customers why.

He was supporting agriculture in Niagara because it needed support. He wasn’t supporting cheaper imports that came with a higher social and environmental cost not reflected in their price tags.

Campbell-Luxton’s championing local agriculture didn’t stop with his bakery, which has since moved to a storefront on King Street in Vineland.

He helped establish the Niagara Local Food Co-op, a virtual farmers market that people could log into to buy food from the people growing and producing it.

Farmer members would sell what they grew, set their own prices “and force people to at least start talking about why it costs more... and get some noise happening. That conversation is 30 years overdue.”

Last year, thanks to a long-standing friendship with Tawse winemaker Paul Pender, Campbell-Luxton was able to help establish the Good Food Fair on a piece of Beamsville farmland owned by Tawse Winery. It was a way “to reinvigorate that discussion” he tried to start with the co-op.
Vendors would abide by four basic rules: their word got them in, doing away with the need for a paper agreement, they had to be honest about what they were selling, what they were selling had to be food and they had to grow or produce that food themselves.

Staff at de la tere arrive at work bright and early to pack crates of bread bound for farmers markets in the GTA.

In a way, it was the anti-farmers market, at least compared to what he was seeing else where in the region.

“I watch people at the St. Catharines market pull stickers off plums and put them into a Foodland Ontario basket,” Campbell-Luxton said.

As the Good Food Fair’s second season nears, this year it will partner with the Women’s Resource Centre, which will handle the administrative side while Campbell-Luxton works on bringing more ideas to fruition. Think dinners under a starry sky. More farmers selling their wares. A place where consumer dollars get into the hands of farmers doing what Campbell-Luxton believes in.

And a place where consumers will learn to question what they see when shopping for food.

“I want people to ask, ‘Why is it so cheap?’” he said. “If you care about the economy, you have to stop looking for the cheapest price because that’s coming out of farmers’ pockets.

“I don’t want to tell you what the right thing is to eat but just start talking about it. Just start asking why.”