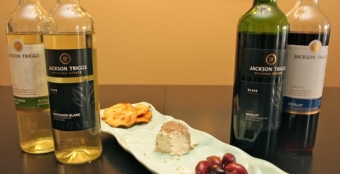 At least, that's what I had drilled into me shortly after moving my wine-ignorant butt to Niagara in 2005. It wasn't long after my arrival that a now-former reporter at The St. Catharines Standard raised the issue with the LCBO giving prominent shelf space to wines that are a blend of international and domestic juices and bearing the confusing moniker of Cellared in Canada (CIC).

For those who didn't know much about wine, it was an easy way to get suckered into buying what one might think to be a Niagara — or at least all-Canadian — vintage. Really, it was a little deceptive. All the while, the bottles containing 100 per cent Niagara or Ontario fermented grape juice — also known as VQA — were languishing in less visible nooks and crannies of your local liquor store.

It was an issue whose drum was beaten quite regularly at the paper in the years following, giving me the impression that Cellared in Canada wines were nothing but plonk. Mind you, I had never tried the stuff. Still, I heard the complaints loud and clear about how it was giving Canadian wine a bad name while not enabling truly local vintages the opportunity to tap into the hoards of wine drinkers pouring into the LCBO every day.

For that reason, it seemed wrong to buy the stuff and I couldn't bring myself to do it. I tried hard not to hold it against anyone who did. To each their own and while I live by the mantra that life's too short to drink cheap wine, if cheap wine is what you like, life is too short to not drink the wine you love.

Still, even when intrepid wine industry reporter Monique Beech (my co-writer of this column) served up some perspective that there are growers in Niagara whose livelihoods — and grape crops — depend on contracts with the big wineries producing CIC wines, I still didn't make a point of grabbing a bottle or tetra pak. Although, I felt a tad guilty for not supporting these local farmers while being quick to offer my dollars in favour of the goods others in the region were producing.

But if faced with choice of two bottles of apple cider in the grocery store, one made of 100 per cent Ontario apples and the other a blend of Chinese and Canadian fruit, I wouldn't hesitate to rebuff the Chinese and Canadian blend in favour of the all-Ontario liquid. And so it has been with my wine purchases. I have tunnel vision in the LCBO, heading straight to the VQA section and sometimes into Vintages, never casting a glance at the imports and least of all, the Cellared in Canada blends.

Not everyone knows my hard and fast wine consumption rules, though. I don't drop my VQA-or-bust beliefs into most conversations, unless they are, in fact, about wine. It became clear this winter, though, that I might want to consider making a point of mentioning it, just on the off chance the person I'm talking to ever has the urge to buy me a bottle of wine.

Not opining about wine at the right moment could be the reason why two bottles of blended vino wound up in my possession a few months ago. I was the recipient of a bottle of Jackson-Triggs Unity Series Sauvignon Blanc and Merlot. It was a very kind gesture from the head of a group for which I do some volunteer work, so I wasn't about to go all wine snob when they were delivered to me at work. The woman who gave them to me has been very good to me and I saw this as merely more goodness coming my way. Still, I wondered what I would do with my newly acquired bottles of blends.

I worried about putting them in my wine rack with my other VQA vintages. What if someone (my wine connoisseur mother, mostly) popped in for a visit and saw them? Worse yet, what if I was mugged on my way from my desk to my car by wine-loving riff raff? What would they think as they ripped my gift bag from my clutches only to discover what was inside

OK, OK, I'm just having some fun. And that's exactly what I decided to do with my CIC wine. I was determined to find out how bad this stuff really was. I was even more curious to know how different it was from Jackson-Triggs' lower-end Black Series VQA wines?

Sitting down with a bottle of each and comparing them sounded like a worthy experiment to me. And so, I invited my wine loving amiga Monique over to join in because two palettes are better one in determining the winner of this CIC vs VQA smackdown.

As a general rule, I don't buy blended wines, formerly known as Cellared in Canada brands.

It's not like I'm morally opposed to them. After covering the wine business as a reporter for several years, I'm well aware that these cheaper blends are a big contributor to the success of Ontario's wine industry.

Each year, about half of Niagara's grape crop goes into these blends, made from wine shipped in from countries such as Chile and Australia. Later, they're combined with a splash of Ontario-grown grapes.

Without "international blends" — as they're now called at the LCBO — several independent grape growers in Niagara would be out of work.

Neither is my VQACellared in Canada wines. They suggested the use of the word 'Canada' on these labels duped consumers into believing they were buying a home-grown product.

For me, the choice to drink VQA over CIC is a matter of taste. It all comes to a sense of place or terroir. I like how wines taste different from year to year and knowing that a Riesling from the Beamsville bench will taste different to one produced in Niagara-on-the-Lake.

You don't get that in international blends.

Blended wines are made by the country's largest wine producers — namely U.S.-owned Vincor Canada and Grimsby-based Andrew Peller Ltd. — and are more about factory-style bulk production than artistry. The wine is designed to taste the same every year and — don't get me wrong — that's the way many people like it.

The price is also attractive. Most retail for $10 and under, which the big wineries argue helps them stay competitive with a flood of cheap imports that flow into Ontario every year.

So I was intrigued when Tiffany suggested we do a little experiment and taste a bottle of VQA (Vintners Quality Alliance made of 100% Ontario grapes) and international blends side by side.

Our tasting wasn't blind. We knew that a Jackson-Triggs black label contained VQA wine while the white labels signalled blends. (Never mind that the bottles look identical except for the difference in label colour. Customer confusion? No matter).

Despite my bias, I tried to go into the tasting with an open mind. Maybe riper fruit shipped in from Chile would prevail over Niagara-grown grapes. Perhaps the cost-savings would be enough to lure me to the blended side.

In both cases my palate was won over by the taste of Niagara terroir.

Here's how it broke down for me:

Jackson Triggs '09 Black Series (VQA): Grassy notes, tropical flavours, nice finish. The kind of wine I'd like to sip on a hot day on my patio.

Jackson Triggs '09 Black Series (VQA): Well-rounded wine with strong berry flavours and a warm earthiness. You can tell this wine spent time in real oak. The kind of wine I'd pull out on a Wednesday and serve with a nice pasta.

Jackson Triggs, Non-Vintage, Unity Series (CIC): The burnt flavour in this wine is overwhelming. Has a strong chemical quality. Wood chips were likely used to give it oak-like quality. The kind of wine that I would have enjoyed in my early twenties.

Jackson Triggs '09 Black Series (VQA): It has become my goal in life to have my cat Otis become an adjective on those wine tasting notes cards. That's because Sauvignon Blanc always reminds me of him when he was having litter box issues. The smell of cat pee is often unmistakable with this wine. And though there were hints of Otis on the nose this time, this version also smelled flowery with a bit of tropical fruit. It could get past my nose and into my mouth where I could taste grapefruit, including some of the bitter white pithy stuff that doesn't always come off when peeling and eating one of those babies.

I'm not a Sauvignon Blanc fan so this wine had the odds stacked against it from the get-go. Then I tasted the CIC version...

Jackson Triggs, Non-Vintage, Unity Series (CIC): Otis, Otis, Otis. All I could smell was Otis. This wine also fell flat on the tastebuds and, if anything, was kind of grassy. And I desperately wanted a cracker to get rid of the horrible aftertaste in my mouth.

If I was trapped on a desert island and only given a bottle of Sauvignon Blanc, not only would I wonder what I did to deserve such a fate, but I would gladly take the Black Series over the Unity Series. You don't know what good is until you've tasted bad. And now I know.

Jackson Triggs '09 Black Series (VQA): I loved the purple colour. It was warm, smoky and lovely with a meaty smell that made this vegetarian strangely hungry. I also caught a whiff of cinnamon and tasted it, too. A nice, innocuous red.

Jackson Triggs, Non-Vintage, Unity Series (CIC): Wow, now I know what a red wine headache feels like. I got one instantly after one sip — one that strangely subsided after my first sip of this wine's VQA counterpart. This wine smelled like wood and had a bitter taste without much, if any, decipherable fruit or other tastes experienced with the VQA version.

In the end, while the $9.95-price for the blended wines is tempting, it's worth it to spend the extra $4 for the VQA editions.