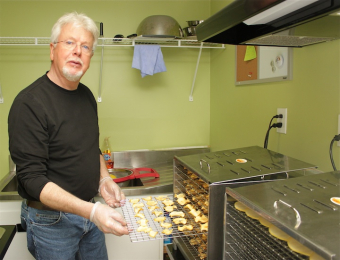 There's a word of advice on every package of Agri-Linx's simple cello packages of dried local fruit.

'Use within 8 weeks of opening, to savour its very best taste.'

But any bag of the easily devoured dried peaches, apricots, sweet or sour cherries and apples marketed by variety is likely to barely last eight minutes once opened for eating.

It was likely even less time in which Barry Kemp, the mastermind behind the Agri-Linx label, saw a growing season's-worth of work virtually lost to Mother Nature's wrath in July 2009. That's when a severe localized hail storm hit his family's Beamsville fruit orchard and he was forced to make the most of the devastation.

"We lost our plums, our pears, our apples. Absolutely everything was devastated," Kemp said. "The apples weren't good for much more than juice but everything was else was gone."

Kemp managed to salvage some of the season, turning some those battered and bruised apples into cider. Still, he wasn't quite ready to chalk the rest of his harvest up to an entire loss. So he decided to dehydrate some of his apples and sell them at the market at Bala's annual Cranberry Festival.

"It just took off. Everything sold," he said.

Kemp, a retired farm manager for Agriculture Canada, was sold, too —  on the idea of turning his quick fix of a bad season into a successful long-term business plan.

He invested in larger dryers. He started dehydrating other fruit, including cherries, apricots and peaches. He then added his name to the list of producers proffering their produce in the Niagara Local Food Co-op. He has watched the hunger for his products grow ever since.

"I was surprised how much I sold and how much demand there was," Kemp said this week before setting to work in a tiny St. Catharines kitchen that is the Agri-Linx headquarters. "I'm seeing that the demand is becoming more and more. I'm getting lots of calls."

Kemp's recipe for success is simple. He keeps the drying process uncomplicated, coring, pitting, slicing or halving the fruit before giving it a lemon juice bath and popping it into one of two stainless steel dehydrators where liquid will be leeched for up to 24 hours, depending on the fruit.

Given the drain on resources, Kemp subscribes to Bullfrog Power, using green energy to power his small but mighty facility.

Some days, Kemp starts work at 3 a.m. He's bracing himself for a break as he nears the end of his run with last season's apples and another growing season begins again.

"I always say my business dries up when the fresh stuff comes out," he said with a smile.

But that's also his busiest time, when his dryers — and him — are going full-tilt to preserve the best of the season. Still, Kemp likes to pace himself. Though his products don't spoil easily, he said he doesn't like keep huge inventory on hand, preferring instead to dry his fruit as needed.

"You can keep this stuff for a year but I like it fresh. Fresher is better," Kemp said.

Locally, Agri-Linx fruit is available through the Local Food Co-op and at Lake Land Meats. Kemp is also being wooed by customers outside Niagara. He'll be selling his dried fruit at the Metro Hall Farmers Market come fall.

A local food store in Toronto also hopes to sell Agri-Linx fruit but wants it in bulk, leaving Kemp to look hard at his business plan once again. Given his penchant for freshness, it's a decision he's still chewing on.

A fresh batch of apple crackers ready to come out of the dryer.

"I don't want somebody to get a bad bag of fruit with my name on it but I am going to explore it," he said.

Kemp also plans to enlist the help of other farmers, buying fruit from audited orchards to supply Agri-Linx with traceable produce. He's even shopping around for an organic orchard of his own. Finding controlled atmosphere storage to keep him in apples year-round is also on his to-do list, along with finding more products to add to the Agri-Linx line to satisfy a hungry entrepreneurial spirit.

Dried tomatoes are in his future, Kemp said. And so is perfecting raisins.