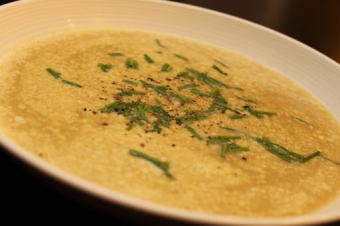 I'm no photographer. That photojournalism course I took in journalism school didn't make me one, either, despite my efforts and my camera gear.

So, it almost seems needless to say (because one look at the photo above will tell you) that my pic of this week's kitchen experiment doesn't do it justice. Doesn't even really make it look remotely appetizing. Hey, let me get the cooking skills down first and then I'll work on presentation and food photography.

My only consolation is that there was no photo of the leek, bacon, potato and Guinness soup next to the how-to from which I took my cues tonight — a sign to me that even Anna D'Agrosa, the professional shutterbug shooting Tony's culinary concoctions in Simply in Season, may have also had a hard time capturing this dish's good side. No photo meant I also didn't have to feel like a foodie flop when my soup inevitably turned out looking nothing like what was in the book.

OK, so that's not my only consolation. It's also that this was a souper — erm, super — easy dish. For once, I didn't feel daunted by something I've chosen to make from this book, mostly because I've made leek and potato soup before, though soup with beer in it is new to me.

Given my veg ways, I did omit the bacon. I contemplated using veggie bacon or even tempeh bacon, but it struck me as blasphemous to use fraudulent flesh in a recipe from a book that really plays up quality — i.e. real — ingredients.

I've got to admit, though, in the early stages of preparation, I worried that this was going to wind up bland and be a soup otherwise made by the one ingredient I deemed arbitrary enough to leave out. I mean, it's leek and potato soup — not exactly the life of the soup party. It's pretty subdued, simple. Some might say boring. And, as I stirred my pot, that's exactly what I was saying. Had the bacon been in there, those leeks would have been rendered in its smokey fat. It was an extra layer of flavour my concoction wouldn't have.

So thank goodness for the cup of Guinness to jazz up the soup equivalent of elevator music. The fresh, chopped chive garnish helped, too. I don't think my soy cream was up to the job as a real cream stand in, particularly in the aesthetics department. It gave my soup the look of something curdled and, well, gross — so much so that not even a soft focus, narrow depth of field or bouncing the flash could fix it.

While it was no beauty, in the end, this soup was the perfect way to bid adieu to a sunny late winter's day and welcome a March's eve threatening a lion of a storm. Soup is my ultimate comfort food.

I just can't help wondering if it would have been better with bacon....