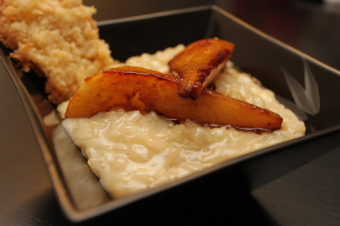 This has been the winter of the carb.

Comfort food has been my crutch to get me through the cold season — food that can pack on the pounds and leave one in carb-induced, nearly catatonic and comatose state.

No time for self-examination to figure out why. I just keep eating and enjoying it until that last forkful, filled with as much regret as good food.

And so, it was in one of my carb and comfort food-seeking moods that I selected the latest recipe from Simply in Season. Problem is, unlike someone who does eat lots of carbs, energy — or at least motivation — hasn't been at record high levels this week. That pushed my Tuesday with Tony and his bourbon rice pudding with caramelized pears and brandy snaps to Friday night.

After the storm we had during the day, there was something soothing about the idea of standing over a pot of steaming milk and bourbon being soaked up by arborio rice.

Being more of a beer and wine girl, bourbon isn't something I usually have around the house. Don't drink it and certainly have never cooked with it. In the recipe, Tony mentions that his favourite of the drink that always struck me as best paired with a pack of Marlboro's is Woodford Reserve.

Well, aside from taking 10 minutes just to find the bourbon section at the liquor store, it took me even longer to settle on a bottle of the burnt sienna elixir. No Woodford Reserve.

There were other brands boasting tempting descriptions with adjectives, such as small-batch and barrel-aged, but they were huge and pushing $40. Never having drunk the stuff and only needing half a cup, I was reluctant to dish out the dough.

So, I took my cues from the hair bands of my youth and settled on a 200mL bottle of Jack Daniels, which is technically Tennessee whisky but who wants to split dyed, teased hairs? My only exposure to this stuff and was seeing it in the pinups of the likes of Motley Crue or Poison, its presence so contrived in the clutches of men in painted-on leather paints and big hair. But at that moment, I figured if it was good enough for them, it can't be that bad.

Bad, indeed. That's how I felt as I walked up to the cashier, holding a bottle of the booze with its easily recognizable black and white label. Yup, I felt like a badass, standing in  my dress pants and work attire, a bottle of JD in my hands and a limp in my leg from a running injury. No one had to know I was using it for something as frou-frou as making rice pudding. Even if it was badass bourbon rice pudding.

The preparation wasn't too stressful, except my brandy snaps looked nothing like the picture and the dough was nothing but a crumbly mess that took several attempts to mold into cookie-like blobs before going in the oven. I'm certain I messed something up, though I'm not sure what. Maybe it was substituting maple syrup for the required corn syrup, which I didn't have.

It also took more than twice as long as the prescribed 18 minutes to turn my blanched arborio into the creamy goodness of rice pudding. I was growing impatient with every stir of the pot that didn't cause the milky mix to thicken noticeably but it was worth the wait.\

I'm not a huge rice pudding fan, other than when I'm in a carb-induced cravefest, but this version of it could make me lust after it even during the days of lighter summertime eating. The bourbon took it from blah to bam, giving it sweetness with a twang. Think golden sugar flecked with charred oak. It all has me wondering what else I can add JD to.

It was an uber-sweet concoction, which I'm guessing the pears were intended to cut somewhat, they didn't. The fruit itself was bland and after being cooked in butter and more sugar, only added more tooth-aching sweetness the pudding. I was a little surprised to find this recipe in the February chapter of the book. Pears, after all, are in season in the fall and there isn't a local pear to be had at this time of year, forcing me to rely on a bland, American bosc. This recipe probably would have been better slotted in October. The days are getting colder and shorter and the cravings for carb-rich comfort foods are growing stronger so it certainly wouldn't be out of place.

The brandy snaps also turned out to be brandy busts and mine certainly didn't add anything to or complement my perfect pudding. With each spoonful of warmth that seeped through me, I felt my shoulders start to slouch and my whole body relax.

Must have been that semi-comatose, catatonic, carb-induced state setting in.