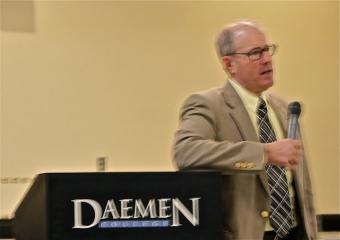 The words, catch-phrases and sound bites came in rapid-fire succession.

"The pigness of the pig."

They are beyond the usual platitudes of the local food, anti-industrial agriculture movement. Far weightier and more catchy than any cliche about eating within a defined radius. If only my pen could keep up with Joel Salatin, that self-professed lunatic farmer from Virginia, immortalized in Michael Pollan's The Omnivore's Dilemma.

Much as I hoped to write an homage to the poster farmer of the real food revolution, I didn't mind being forced to sit back and take in the words of wisdom about the future food and farming that Salatin, "the high priest of the pasture" espoused Monday night at Daemen College. It was there, in an auditorium filled with at least 300 farmers, foodies and agvocates, that I saw up-close Salatin's zeal and brilliance, which I'd only read about in books or seen in documentaries.

I wasn't star-struck, like I usually am (yup, even Lloyd Robertson left me stammering and unintelligible when I crossed paths with him 10 years ago). Instead, I was inspired by what I heard.

Salatin has a no-nonsense approach to farming, following the patterns of nature and being in touch with the idiosyncrasies of land and animal. If you've read Pollan's foodie zeitgeist, you know Salatin's story  well. Salatin uses low-tech methods, employing his livestock to do a lot of the work on his farm and a lot of his own elbow grease to produce food that any one of us would be lucky to eat.

Integrity food, he calls it.

Everything he said about food production made sense to a non-farming type like me. It was actually enough to perhaps make me feel a little pessimistic about the future of food; pessimistic because I could worry about why there isn't more buy-in to the way Salatin farms from consumers or other farmers (though it seems to be a growing movement). Or why the US government gives Monsanto carte-blanche to ruin yet another industry by allowing free rein to plant its new genetically modified alfalfa. It's tough for anyone who pays attention to these issues not to foresee shades of the canola disaster that exists on the Canadian Prairies where Monsanto's patented Roundup Ready seed has wreaked havoc, contaminating conventional non-GMO and organic rapeseed crops. I could wonder who the next Percy Schmeiser a la alfalfa will be or worry whether there will be one at all. Will there be enough people to follow Salatin's lead before it's too late for our food supply and, therefore, us?

While Salatin may be the minority at the moment — a small beam of bright light amongst all the recent bleak headlines about food production — I left that auditorium last night feeling upbeat about the future of North American agriculture. This despite him rhyming off staggering statistics like 3.4 million acres of New York state farmland has been abandoned in the past 15 years.

To him, that's opportunity — a sign there is more than enough land to feed the world and feed it organic food produced the way Salatin does it.

From Salatin's perspective, the "tsunami of local food" that makes some folks unhappy because it's a movement that can't be "Wall-Street-ified" seems unstoppable. And, fortunately, my hand, buoyed by hope and the energy in the room, was able to keep up with what came next.

"The thing I'm most optimistic about is what I see tonight," Salatin said, motioning to us in the audience.

He continued proselytising about getting back in the kitchen. Make the dinner table the centre of the family where we engage in the "sacred" act of eating rather than have it be  "the pitstop in life on our way to other things," he said.

Then came some simple math in what can be a complex equation.

"One plus one plus one... Collectively, you — we — all begin withdrawing from the economy of Monsanto."

Here's hoping there's a little Percy Schmeiser in all of us.