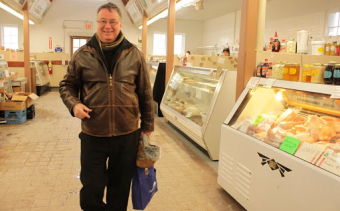 Malcolm Allen has been busy learning a new language.

Gone is the former CAW financial secretary's union speak of 'brethren' and 'solidarity.' It's been replaced in the newly minted NDP deputy agriculture and food security critic's lexicon by the likes of pulses, oilseeds, succession and risk management.

They spill from Allen's lips as though the lingo of farming is his mother tongue and not something he's only received a crash course in during the past few months.

Though Allen, a rookie Welland MP, has traded in the autoworkers' banner of 'Buy the car your neighbours helped build' for one that reads 'Buy the food your neighbours helped grow,' he's still doing what he did as union brass: championing the importance of a Canadian industry so tightly woven into this country's economic fabric, many Canucks take it for it granted.

"Canada is seen as the bread basket to the world, which is true, but there's a lot of stuff we aren't doing," Allen said during a regular visits to the Welland Farmers Market recently. "If we lose the ability to do certain things, we may never get them back.

"We have this sense that all of this food will be at the supermarket. You take something off the shelf and miraculously, something else shows up. We need to think about that," he added.

To help get the wheels turning and put the cornucopia that is Canadian agriculture in the fore, Allen pitched the idea of a National Local Food Day last fall.

His private member's bill is currently working its way through the system — it's awaiting second reading — but Allen envisions the homage to Canadian farmers and all they provide for us to happen annually every Friday before Thanksgiving. After all, it's a time of year synonymous with harvest and being grateful for what the growing season has given. Allen hopes the day will inspire and remind Canadians to buy and eat local.

"It's not a holiday. It's not going to cost you anything. This is a day to recognize the folks who produced the good food you'll enjoy this Thanksgiving," he explained during a break from making the rounds at the market.

With his reusable shopping bags full of eggs, cold cuts and bacon at his feet (he saved room for apples to buy at the market later) and a brown aviator-like winter cap emblazoned with the slogan 'Farmers Feed Cities' in his clutches, Allen seems comfortable wearing the hat of agriculture champion.

He's at ease discussing what's plaguing the industry and speaks with same passion for saving it that he did the auto industry. And while he waits for Local Food Day to become permanently marked in Canadian calendars, he has plenty of other issues to chew on in his new role.

Malcolm Allen chats with a local egg farmer at the Welland Farmers Market. The Welland MP has been getting schooled in Canadian agriculture issues since getting the nod to be the NDP's agriculture and food security critic.

Small farms have the highest rate of bankruptcy of any business in the country, he said.

Grains and pulses — a word he only recently learned meant chickpeas and lentils, not just the palpitation of arteries — are making good money right now.

Pork farmers are "bankrupt on paper," raising pigs for more than what they're able to sell them.

He questions who will be next to take the reins of farms throughout Canada, given how hugely expensive it is for a young person to get into farming, regardless of whether they're born into the business.

"I don't think a lot of us take the time to think 'How do they start out?' It's difficult to get financing, especially if you're a farmer," Allen said. "The average age of farmers is approaching 60. We need a new generation of farmers."

He's also come to recognize the great divide in Canadian agriculture — the Manitoba-Ontario border. Western Canada is fertile ground for big agribusiness. It's a place where size really does matter and farmers have traded in their quarter sections for thousands of acres of land.

By contrast, farms east of the postage stamp province are just that — small. Problem is, current agriculture policy favours the big operations, Allen said. The small farms of Eastern Canada don't fit with the "Conservative mantra."

"They're not working hard enough at that — at how do we keep small farms that are viable alive," he said.

Locally, the biggest issue is land use, Allen said. The best crop land has already been eaten by sprawl and while the Greenbelt is a good idea in principle, like much else to do with Canadian agriculture, it's far from perfect.

He doesn't mince his words when talking about it, ensuring nothing he says gets lost in translation.

"We do this, we say we want to protect farmland but then we don't enable farmers to make a living from farming," he said.

"Farmers don't deserve to live in poverty so they can feed us."