Tuesday with the real McCoy: Tuesdays with Tony Part 2 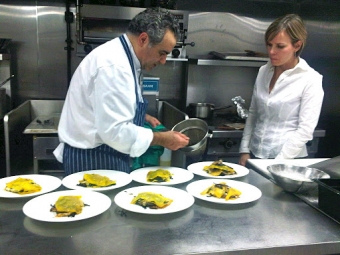 What is it that they say about the best laid plans?

Or is it the best of intentions?

There's a reason why I would have to turn to Google to answer my own questions. I'm not one to make best laid plans no matter how good my intentions.

Still, I do make plans. Lots of them. Probably too many of them. So much so, that I should really get a daytimer or get with the times and use that great electronic version on my BlackBerry because as a result of my ability to make plans — but my knack for poor planning — I have a bad habit of double booking

Earlier this month, I made the resolution that I would spend every second and fourth Tuesday of the month in my kitchen with Tony de Luca's Simply in Season cookbook and toil away at one of the fabulous recipes in it. All the while, I'd be upping my scant culinary skills and making good use of one of my cooksbooks that needs to be put to good use

Then, I decided to sign up for half-marathon training to help another cause. I completely failed to make the connection when I was told clinic nights are Tuesdays at 6:30. Smack in the middle of prime cooking and eating time.

Tuesday nights are also the evenings the man himself dedicates to hosting cooking classes at his Wine Country Restaurant with nutritionist Lisa Petty — classes that I intended to take at least one of. And so, what's a girl to do when she's supposed to be pulling together some drool-worthy dinner from a great how-to guide and training to run 21.5 kilometres? She ditches both at the last minute to take part in one of those cooking classes after being given the head's up just before she was supposed to lace up — her shoes or apron — that the evening's bit of culinary education would be dedicated to pasta.

So off I went. Hungry, curious and feeling slightly guilty about ditching my training on the first night.

Fortunately, the guilt was short-lived. I was able to justify my decision with the knowledge that all the pasta I was about to eat — and its bountiful carbs — would help me the following evening when my training continued. Plans, I'm not so good at. Rationalization is more my forte.

Also, I figured if I'm going to do Tuesdays with Tony right, I might as well learn a few things from the man himself early on.

I was joined at Tony's Wine Country Restaurant by six other people who attended the session the week before. Any feelings of being the only one out of the loop were short-lived. It really was a warm, intimate environment, made even more so by the two hosts, Tony and Lisa.

I met Tony last summer when I interviewed him for a story I was writing for Edible Toronto. I could have sat there for hours talking to him. The guy is so engaging and genuine. Truth be told, if I could, I'd adopt him as my uncle. Everyone needs a super-cool uncle to mentor them and be the person they look up to. He's just someone that you want to be around and hope just a little bit of him rubs off.

Lisa and I met in my early days at The Standard as a lifestyles reporter. I interviewed her about her book Living Beauty and like Tony, she's another person who made an impression on me. She's a nutritionist but her health warnings extend beyond what we put in our bodies to what we also put on them. Ever since meeting Lisa, I scrutinize the labels of every bottle of shampoo, hairspray and mascara before opting to buy it. It was one change in my health regimen that has had a huge impact.

The reason for the chef and nutritionist teaming up on Tuesdays: "to educate and entertain while at the same time figuring out what people know about food and what they are prepared to try or to change to make recipes healthier," Lisa explained.

The hope is to do more classes — there are two left in the current series, which will focus on seafood and game meats — throughout the year and possibly join forces on a cookbook. The makings of another resolution for me, perhaps.

The evening, which cost $90, included five courses of pasta (cue the carb-induced coma). With the exception of the paccheri, Tony made every noodle. He walked us through the steps to make tagliatelle, gnocchi, cavatelli, which look like giant mealworms but more appetizing, lasagna and paccheri, big fat tubes. Then came his tips for sauces, which included chicken, pancetta, roasted garlic and oil (or my veg option, sans chicken and pancetta), mushroom cream sauce, vodka a la crema, spicy tomato chorizo arrabiata and gorgonzola cream sauce.

Truth is, I can't remember ever eating pasta as perfect as this. That includes the stuff I ate in Italy.

His gnocchi was so soft and pillowy, it was relaxing just to eat it. His tagliatelle arrabiata had me wishing I had more on my plate. It wasn't too spicy and I now know the true meaning of al dente. Everything was swoon-worthy and matched with a Niagara wine, whose 411 was given to us by Paul Gosse, the restaurant's manager. Cattail Creek, Organized Crime, Malivoire and Jackson-Triggs all served as soulmates to each hearty dish of consummate carbs we consumed.

There wasn't much hands-on in class, unless you count picking up your fork or wine glass. Instead, we gathered in the kitchen and watched Tony work his magic while Lisa threw out some healthy suggestions and alternatives to Tony's semolina pasta dough and the knobs of butter he'd use in his recipes. Think quinoa flour instead of semolina or olive oil instead of butter.

My veg version of the Chicken, pancetta, garlic and oil paccheri.

Like Sherlock Holmes and Doctor Watson or Don Quixote and Sancho Panza, Tony and Lisa are good foils. They play off each other and have great chemistry, drawing attention to all that's wonderful about what the other does. It was a good show with plenty of opportunity for us spectators to join in the conversation.

So, as Tuesday looms, and with it, the next cooking class, I will be good and go to my half-marathon training. But trust me, no endorphin rush beats a Tuesday with Tony feeding you his food and his wisdom.

And for you adventurous folk who don't get daunted by making your own pasta, like I do, I leave you with Tony's recipe for my favourite noodle of the night:

Mix in a bowl, roll out ropes of dough and cut in half-inch pieces.

You’ll know they’re finished when cooking because they’ll float to the surface.