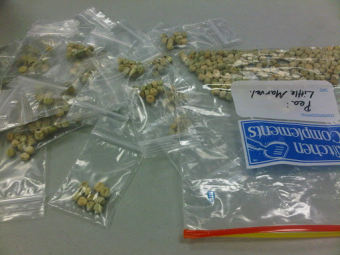 They have phenomenal powers, those seeds.

So small and yet their effect so big. And not just because they grow into food — sustenance.

About a year ago at this time, I sat with a black cat in my lap in Linda's kitchen counting and packing seeds for her and escaping a horribly upsetting time at work.

I was being bullied and it had reached new heights, pushing me to new lows. But I remember the feeling of calm, a soothing, comfort as I sat with someone I call my second mom and got lost in something bigger than me.

Funny how a year later, with a new job in a non-toxic environment, no longer living in fear and peace restored, that seeds would once again provide me with the same solace they had given me a year ago. It seems that despite things improving somewhat after numerous people spoke up about the bully, the situation is getting worse again.

It weighs on me, despite me having left it behind almost a year ago now, despite me leaving with the understanding this would never happen again. Though last year I was demoralized, weepy, fearful of 9 a.m. and what upset another day would bring this year, I was frustrated and angry about what might be happening to group of such good people. But much like a year ago, I also felt powerless about what to do.

But it was amazing what happened when I sat down to count with a ziploc of Little Marvel pea seeds in the basement room of a building at the Vineland Research Centre this week, in the company of others lost in a similar task. The seeds needed to be divvied up to be handed out in a few weeks at Seedy Saturday so they could be used to provide a little more food security to someone willing to take a chance and grow them. As I reached in the baggie for the first few dried, wrinkly, snot-coloured seeds (sorry, they really were that colour), I felt my anger drift away and my spirits lift again.

The dedicated members of Lettuce, Turnip and Wine on our seed packaging assembly line.

All the worry seemed to disappear as I counted — one, two, three, on the way to ten seeds — before moving on to the next package. The next package that will be given to someone — greenthumb, brownthumb, newbie gardener — on Feb. 12. The next package, which holds so much possibility and so much emotion, lying in wait.

Feelings of success if the seeds within grow, failure if they don't. Joy in eating of what they produce, frustration at never being able to taste what could have been but for whatever reason, never came to fruition. Pride at a job well done, determination to do better the next time. A fresh start.

Amazing what a tiny little seed holds within it.