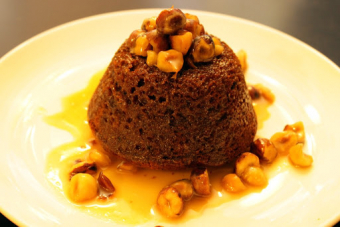 The panic set in early. Standing in line at the grocery, in fact, as I surveyed the last few items I needed for my initiation into a year of Tuesdays with Tony de Luca and 52 weeks of expanding my limited repertoire of cooking skills with his Simply in Season cookbook.

One item was noticeably absent as I stood there, waiting my turn to pay: cooking spray. You know, the kind that makes baked food easily slide out of whatever container it solidified in. I had it on my shopping list but got distracted by something that wasn't — a bottle of liquid smoke for my vegetarian take on Southern greens that I often make in the winter.

My heart started palpitating. A sickly feeling lurched toward the pit of my stomach. It was almost my turn at the front of the line and a very beige man — he was wearing beige shoes, beige pants, a beige shirt, beige coat, even had a beige complexion — had taken up his post in line behind me and began unloading the largest order of frozen entrees I had ever seen. Many of them also appeared to be in beige boxes.

I refused in this moment to ask 'What would Tony do?' How would I know anyway. And besides, the guy's a pro chef, so chances are, he wouldn't be out buying ingredients at the last minute. Why? Because I imagine he has a well-stocked pantry and if not, he would at least have an eager beaver kitchen helper to send to the store so he could continue working his culinary magic uninterrupted.

I could have also asked 'What would a rational person do?' In hindsight, I'm guessing such a soul would probably ask the cashier to summon a bag boy or hold their place in line as they darted off at record speed in search of some Pam. But as that ill feeling nestled deeper into stomach, I realized that I was approaching far from rational. Maybe I should bail on Tuesdays with Tony altogether or at least try again next week, I thought. How crucial was cooking spray to the recipe I selected to make anyway? If I used butter to grease my ramekins that would hold what I hoped would be real, live sticky toffee pudding a la Tony de Luca, would that throw off the entire recipe?

Ugh. It was agonizing. I paid for my groceries and opted to take a risk on the butter.

It wasn't my plan to start this keeping of a new year's resolution with a dessert. I mean, I always hear that footloose and fancy-free, thumb-your-nose-at-the-establishment recommendation to eat dessert first. I've never done it. In fact, I don't often eat dessert period. But on a night that was calling for 15 centimetres of snow, something sweet, moist and warm seemed like escape. Comfort. A good idea, gosh darn it. And at first glance of the recipe, relatively easy.

So, sticky toffee pudding with hazelnut caramel sauce it was. It seemed manageable aside from absolutely delicious and the step-by-step came with a preamble about how, when Tony worked at the Chewton Glen hotel in England, he stayed with a couple who would sometimes leave him dinner with this as dessert. The story was quaint, just like a sticky toffee pudding.

But as I set to work, I started to wonder if what happened in the grocery store was an omen. My first task was to melt sugar and butter into what sounded like a lovely golden brown elixir of sweet, creamy goodness that would morph into the hazelnut-caramel sauce. But before I knew it, it was taking on a decidedly taupe tone akin to the beige man in line behind me at the grocery store and it was still as gritty as when I first introduced both ingredients to each other.

After about half an hour, I figured perhaps the concoction that really looked like brown sugar at this point was ready for the next step. Or I was just growing impatient. I added cream to the mixture as Tony instructed and that's when my granulated goop turned rock hard. Again with the heart palpitations. Had I ruined my pudding-to-be before I even really began? And in my distraction of righting what appeared to be a major wrong, I forgot about my toasting hazelnuts that were now burning. Good thing I bought double amount the I needed — an unexpected benefit of having no concept of volume when shopping in the bulk food section.

Working my way through my sticky toffee pudding with hazelnut-caramel sauce, though really, eating this was far from work.

Somehow, I managed to save the sauce and the toffee-like shards melted again to become the viscous liquid they were meant to be.

But eventually, I managed to marry all my ingredients — the dates, the dark rum (no coincidence it rhymes with yum), the sugar et al and I was starting to feel a bit better about my prospects. I still had one daunting task in front of me though. I had come so far and I feared this last, seemingly trivial detail that I wouldn't follow to a proverbial 'T' would be the death of my sticky toffee and my first Tuesday with Tony would go from culinary coup to food flop.

I still had to grease my ramekins with the Pam stand-in, butter.

The final bite for which there was no room in my belly. Pity.

I'm happy to report it worked. When I dumped my puddin' onto my plate and drizzled it with the hazelnut sauce, I felt a smile spread across my face — a reflex reaction to breathing deeply the creamy, comforting buttery smell emanating from what was shaping up to be bona fide, homemade drool-worthy dessert.

That first bite was unlike anything I've ever tried. I tasted the warmth of the pudding, the depth of the rum, the earthiness of the nuts.

Most pronounced of them all was the sweetness of success.