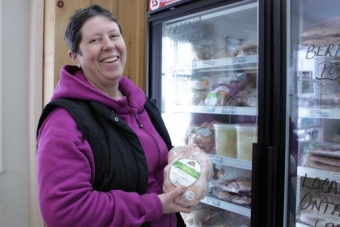 Need a tip on serving the five-spice duck prosciutto she sells at her Lake Land Meats farm market in west St. Catharines? She has one: you can trim the fat off and not lose the flavour.

Looking for an unusual centrepiece for a main course, say, like camel or kangaroo? This maven of meat can set you up. But for the less adventurous, she has plenty of boar, Berkshire pork, elk, bison, quail and squab sourced from as close to home as possible. Vaughn also proffers her own farm-raised venison and Red Angus/Hereford beef.

Despite the selection, this no-nonsense lady of the land loves nothing more than a good steak.

Ditto for marketing savvy. Since 1995, Vaughn has been carving out quite a niche in Niagara with her selection of meat that you won't find at any grocery store. It was only nine years earlier that the former grape grower started trading in her vines, which made her family the biggest producer for Brights Wines at one time, and replacing them with deer and elk.

"It was a time of great upheaval. We grew 300 acres of grapes," Vaughn recalled.

But the introduction of free trade made raising game meat seem more secure and an easier venture to transition to, considering the Vaughns, who have been farming in St. Catharines since 1918, already had the equipment and pasture, thanks to their existing herds of cattle.

Clearly Vaughn knows what she's doing. But if she does feel any self-doubt, it's with her latest venture, Revolution 2012. Modelled after Monforte Dairy's Renaissance, which is a grassroots fundraising effort to expand the Stratford dairy and its cheese-making capacity, Revolution 2012 is a CSA (Community Supported Agriculture) that will enable the construction of a culinary studio at Lake Land.

People buy their shares now, providing that cash to build a facility that will teach people about the food Vaughn sells and how to enjoy it without her having to go to the bank for a high-interest loan. Vaughn envisions themed dinners, cooking classes, a place for people to meet and hold gatherings at her studio.

In return, revolutionaries get vouchers to spend each year over the next five years in Vaughn's store, which also sells eggs, local cider and grape juice. And the return on investment is pretty impressive: one type of share aptly called the T-bone steak, for example, sells for $200 but gives the buyer $250 in Lake Land cash.

Vaughn launched the campaign in early 2010 with a simple motive in mind.

Trouble is, buy-in has been slow, despite Revolution 2012 getting local press, regular rotation in radio advertising and promotion on her website. That's leaving Vaughn to re-think her approach, though admittedly, she's not sure how turn Revolution 2012 into a major local food coup.

"It's a bit discouraging because the whole point was to get the money as quickly as possible," Vaughn said, noting Monforte raised the money it needed in about a year. "Sadly, it hasn't happened. I may need to talk it up more. I don't try to force people into things. (The brochure) is here and if people pick it up...," her voice trails.

"As I tell people, it's an investment and you're getting a really good return... . Maybe we're before our time."

Still, that's not stopping Vaughn from helping people get with the times — with food, at least — if they so desire.

In addition to selling meat, poultry and fish, Vaughn grows vegetables that she sells in a CSA each summer. Last year, 20 people received weekly harvests on a venture that Vaughn would hate to give up, yet she's certain doesn't earn her any income.

Arden Vaughn preserves some of the produce from her garden to preserve and sell under the label 'Garden of Arden.'

She also does her own preserving and sells jars of salsa, dill pickles named in honour of her husband Bill and tomato juice under the quaint and catchy label 'The Garden of Arden' (try saying that without cracking a smile).

All the while, she hears her customers out, working hard to provide them with the food they want and that she feels they deserve. Take the revival of sales of her beef: she offers both grain and grassfed versions. Five years ago, people only wanted the game. With the rise of the local food movement, folks are going back to the cow.

"Our sales almost doubled by adding it again," she said. "I realized there was a whole market we weren't servicing, but five years ago, no one wanted it."

As Vaughn contemplates how to build momentum behind Revolution 2012 and the future of her garden CSA, one thing is for sure. There really is nothing she would rather be doing.

"(Farming) is a lifestyle. It's not a job. Yes, it's hard work but it's your own work," Vaughn said. "Certainly, the pay isn't great but it's a quality of life thing and money isn't everything."

NiAGara: Farm Heroes and Agvocates is a new series that profiles Niagara's farmers and local food advocates. Do you have a farm hero or agvocate that people should know about? Let us know by emailing eatingniagara@gmail.com.