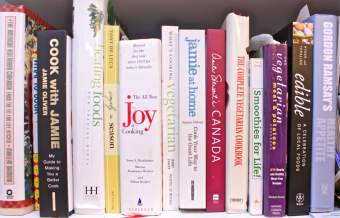 New year's resolutions to me are kind of like birthday wishes.

I feel like saying them — or writing them  — aloud will mean they won't come true or at least be severely jinxed.

This year, to help my cause, I started making resolutions at random times throughout 2010 and didn't tell anybody. Sometimes they stuck. Sometimes the random timing of them made them easy to forget. And sometimes, they just proved to be a bigger challenge than I thought. Take the time I resolved in the fall to get to work earlier in the morning and instead, I arrived later and later each day.

So, I broach the topic of new year's resolutions with caution — skepticism, even. I don't want to load up on them, though I will still try to get to work on time if not early in 2011.

On the food front, I do hope that 2011 will continue to be as much a year of learning as espousing as last year and 2009. Certain pleasures I picked up in 2010 I intend to keep up this year, like putzing around in my garden and trying to grow at least one edible herbaceous specimen that hasn't already been touched by my brownish green thumb.

Biking to my favourite fruit stands in Niagara-on-the-Lake, camera in tow, is something else I intend to keep up this year.

As far as doing anything new or different, though, I'm going to start using some of my cookbooks more — well, one in particular.

My go-to guide in the kitchen has always been the Joy of Cooking. The original idiot's guide, this is one book I can't imagine my cookbook shelf without. If I had to be trapped on a desert island with a cookbook, this is the one I would take. Not only would it provide me with enough tinder to start a fire and keep it going, but there'd still be plenty of recipes left in it to guide me so I could turn something on that island into a delicious meal.

One cookbook in my growing collection I bought last year as a show of support for a fabulous local chef, Tony de Luca. His Simply in Season, 12 Months of Wine Country Cooking came out last June and is a beautiful homage to not just what each season has to offer, but the bounty of each month. Even February.

Problem is, since buying it, it has sat in my cupboard, cracked only occasion so I can rub its glossy, smooth pages between my fingers and be awestruck by its thoughtful portrayal of de Luca's culinary creations. I get a little bit daunted, however, when I start reading the recipes closely.

It's not because they are tough or meant only for culinary school grads. De Luca, himself, has said his audience for this book is the home cook.

But in comparison, the Joy of Cooking is like the junior Kindergarten of culinary instruction. It's simple, basic and safe.

My copy of Tony de Luca's Simply in Season.

Simply in Season is more akin to starting high school. It's like graduating from eating paste and finger painting with chocolate pudding to reciting the stages of photosynthesis. I'm at that point in my culinary development where I'm like the awkward teen wanting to try something more adult, to be one of the cool kids, yet still filled with enough self-doubt that I shy away and act content with being a culinary wallflower. Every time I think I'm ready for Simply in Season, my inner culinary 13-year-old gets freaked and I put the cookbook back on the shelf.

However, I've spent $45 on my copy of Simply in Season, even had it autographed, and, as a result, I just can't bring myself to have it languish on any dusty shelf as a cookbook and culinary adventure unfulfilled.

So, here's my resolution: twice a month, I'm going to make something from Simply in Season. Just one recipe or maybe two at a time depending on my mood. (Cue the 'I'm a big kid now' jingle). And I plan to do it on a Tuesday. As a fan of alliteration, I like the sound of Tuesdays with Tony and I know that the man inspiring my resolution also hosts the odd cooking class series of the same name, so it seems fitting. I may also just sign up for one of those classes to learn from the man himself.

Every second and fourth Tuesday of the month I will have psyched myself up enough to get gutsy in the kitchen and even put my own twist on the recipes (as a vegetarian, I'm going to have to with some of them). I'll be sure to share my successes and even my failures, though I'm hoping, but not counting on, those being few and far between.

My other resolution: to find a use for the lavender that I'm growing aside from placing sprigs of it in my sock drawer. Any suggestions are welcome but I have to admit, I've been reluctant to find a food use for it because I can't get past the thought that I'll feel like I'm eating soap.

On that note, I say happy new year and happy eating to you all. If I manage to stick to this resolution, both will ring true for me.