The name's Mayer, but you can call me cheesemaker extraordinaire 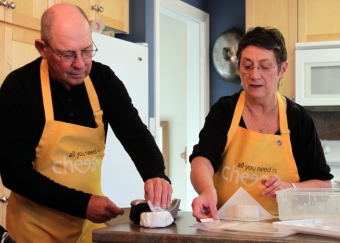 I've never been more excited to see mold growing on something in my fridge.

For the first time, the fuzzy stuff's presence has nothing to do with me forgetting about a tofu stir-fry that got pushed to the back of the fridge.

Nope, that mold is there because I've done something right. Its presence is magical. Pure, cheesemaking wizardry, thanks to Doreen and Peter Sullivan, ultimate foodies that they are.

Three months ago, I signed up to spend a Saturday with this Niagara Falls couple making cheese. I was beckoned by an offer from Standard reporter Marlene Bergsma, who knew such an outing would appeal to my food-curious sensibilities.

When she suggested it in July, I figured we'd be making cheese in just a couple of weeks but no such luck. The Sullivans' days of leading groups in proper milk-curdling techniques are in high demand and that meant Marlene and I were looking at November at the earliest to try our hands at an age-old art that seemed romantic, tasty and potentially smelly all at once.

We pulled up to a modest bungalow in north Niagara Falls on frosty Saturday morning to find six other curious and cheese loving folk who had travelled from as far away as Port Elgin and as close as Port Dalhousie to learn how to make cheese. We were even joined by a partner in the Upper Canada Cheese Co., that popular Jordan stop that churns out the likes of Niagara Gold and the perfectly named Comfort Cream cheeses.

Me packing curd into a cheese mold with hopes of it becoming Roquefort.

Our reasons for being there were just as varied as our hometowns: one couple was already making their own wine with local grapes so making cheese just seemed to be a natural extension of their handiwork. Others were curious or dragged along by partners, moms, or in the case of the Upper Canada partner, the determination to finally figure out how cheese is made.

Truth is, it's not easy. Aside from milk, there are certain things that are required: lots of hand soap and paper towels (if you missed out on the importance of hand-washing before, a day with the Sullivans will forever cement the importance of this essential life lesson) and patience. Cheesemaking is a time-consuming, precise practice. You might not guess it, but the production of curds and whey is a pretty finicky process.

Doreen Sullivan wraps some of her homemade cheese.

We all gathered around the Sullivans' crowded kitchen table to learn about what made them home cheesemakers. For Peter, a guy with rosy cheeks and kindly face, he was groomed to be a foodie at an early age during visits to the neighbourhood butcher and a trip to Europe after finishing school with only high school French and an intimate knowledge of cheddar — he had no idea there were other cheeses out there — to guide him.

Given that all he could say en francais when hunger struck one day in Switzerland was 'Une sandwich fromage,' little did he expect that his request for sustenance would turn into a life-changing experience. What he got was some fine bread with some even finer Brie in between. And so, a sophisticated cheese connoisseur was born. It was a love that would only grow during another act of desperation 10 years ago.

Peter was in a pinch for a Christmas present when, as luck would have it, he heard the voice of a godsend on the radio. It was a woman named Margaret Morris and she talked about her cheesemaking classes that she held in her home in eastern Ontario. It was a done deal and a merry Christmas as Peter signed up both himself and Doreen.

They've never looked back and I'm doubtful they've bought much cheese since.

As for Doreen, she worked as a teacher, making her a shoo-in to lead a bunch of cheesemaking greeners in a how-to session. But she also got lessons in coagulation as a dental hygenist. Yup, that's right. Mouth cheese gave Doreen insight into the making of real cheese. After all, it's all about bacteria to take milk from that creamy liquid to a creamy solid worthy of being called cheese and being a dental hygenist taught her the difference good bacteria versus bad bacteria can make.

Enter the lectures on handwashing. If cheesemaking ever fails this duo, they would have a future with your local public health department for their stressing the importance of washing one's hands to the tune of Happy Birthday — a good length of time to get your digits soapy and water soaked. I must have lathered, rinsed and repeated about 10 times in the six hours I was in the Sullivans' company. My red and raw hands were assurance I wasn't going to contaminate my cheese-in-the-making with that bad bacteria Doreen had warned us about, even if it dashed any hopes of my being a hand model.

On this blustery late fall day, we were going to make Camembert and Roquefort, though we were also provided with recipes to make Ricotta and cream cheese in the detailed and (I hope) foolproof instructions we were sent home with.

As the milk was brought to just the right temperature, we were told that these vastly different cheeses, as with any cheese really, have one thing in common.

And that is brought to the right temperature in a water bath with sterile equipment.

We dutifully filled out our cheese diaries, penning in the time we got started, the temperature of the milk, the water bath and any interventions necessary to bring it up to the right heat at different intervals throughout the morning. We jotted down the proper bacteria to take our concoction from warm milk to the stuff that Little Miss Muffet ate on that tuffet of hers. We learned that rennet, the ingredient I have steered clear of as a vegetarian because its source can be a calf's stomach, is best used when it's the synthetic kind. Relief washed over me as I realized I didn't have to worry about breaking any veggie vow I had taken.

The Diva of Coagulation.

Then we were told to wash up and genuflect to the Diva of Coagulation, an effigy that sits amongst all the cheese books and magazines piled in the Sullivans' living room. The DC looks like a voodoo doll but holds the key to all cheesemaking success, Doreen swore. Too bad in my excitement I knocked her off her perch but at least if my cheesemaking ventures failed, I'd have something other than my novice ways to blame. (Fortunately, all is well so far. Thanks DC!)

A few hours later, we lined up to cut the curd — the Sullivans were full of cheese jokes but deftly avoided that old standard 'Cut the cheese' — made of store-bought milk and some pure cream the Sullivans bought stateside.

"This is when I say a prayer to the Diva of Coagulation," Doreen said.

Using a giant spatula, Doreen poked, prodded and stretched her curd until it made a clean break — the sign that it was ready to be further transformed into something more closely resembling Camembert.

We sliced through the curd and then filled up our cheese molds — small, plastic porous cups to let the whey drain and the curd to form into perfect pucks.

On to lunch, which is worthy of a post unto itself. Just listen to this menu: Chilled breast of chicken stuffed with roasted red peppers, cheese (made by the Sullivans, of course), marinated shrimp kabobs with Mozzarella and grape tomatoes, smoked salmon and gravlax with honey dill Dijon mustard, lemon mayonnaise and garlic mayonnaise, freshly baked baguettes, kalamata olive tapenade, wasabi guacomole and cucumber garlic sour cream, and salad with dried cranberries, walnuts and blue cheese dressing, again made with their cheese.

It was all artfully displayed and better still, homemade. Every sauce, every chicken breast that had been stuffed and inch of salmon smoked or cured was done by the Sullivans. If you think you're a foodie, you ain't seen nothing until you meet this couple, who, aside from having two cheese fridges to age their creations, have two homemade smokers in their backyard where they add that rich, woodsy flavour to everything from fish to their own cheeses.

Draining the whey from the Roquefort curd.

For dessert, we got to sample some of their creations, including a two-year-old Gouda, smoked cheddar, cream cheese, herbed cream cheese, blue and Camembert. These are talented folks. And with my full belly topped up with a beautiful, peppery Pilliteri Estates Gamay, the last thing I wanted to do was go back to slaving in the kitchen. But alas, Peter's pot of soon-to-be Roquefort was calling.

"I really like making this cheese because you can really play with it," he said eagerly.

Still, it all seemed like hard work with a temperamental medium at that. Copious hand-washing and temperature checking ensued, as did curd-breaking and cutting, curd straining and cheese mold filling, all with the worry that if we made the slightest misstep, we could end up with a breeding ground for listeria or worse: A failed effort to make cheese.

"This cheese is like a two-year-old. It's kind of telling you what to do," Doreen said.

Fingers crossed I understand cheese, something that is definitely not my mother tongue.

After flipping our cheese pucks a few times, we were sent on our way, some of us with our own cheesemaking supplies to try this at home. But I have to admit, there is so much that could go wrong and so much that could cause serious illness if I'm not careful. As someone who lacks patience because they just want the gratification of a successful culinary venture, I'm very likely to be a candidate to seriously screw up making cheese at home.

Fortunately, Marlene bought the goods and we'll try out creating seemingly easier cream cheese with goat's in her kitchen on Saturday.

In the meantime, I'll delight in the mold growing in my fridge and a food experiment gone right, all the while praying to that deity of congelation, the Diva of Coagulation.

I'll find out in four to seven weeks if she has deemed my pleas worthy of response.