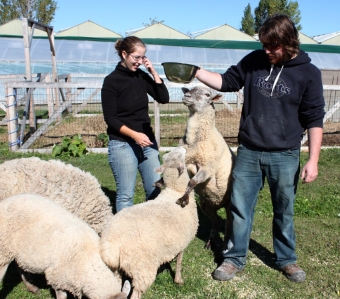 Corn riot. The mere words can conjure up images of civil unrest in some far-flung nation facing a shortage of the staple after a horrible growing season.Or, for those fearing ethanol's efforts to dethrone oil as the fuel of the future, it might be what comes to mind when the decision to feed people or our cars becomes more pressing.But for Ryan and Amanda Thiessen, corn riots are what they do for kicks.To incite one, all that's needed is a bowl of corn and a visit with their sheep where a flock made up of the likes of Bess and Ted and their companions will climb over each other, leap through the air and hip check their mates to get at the grainy goods.A year after the newbie farmers added the first members of their flock of Newfoundland sheep to their Creek Shore Farms, the stunt still hasn't grown old.In fact, there isn't really anything the novelty has worn off of yet at their rented Vineland farm or Jordan vegetable patch, which they've been working for less than a year."It's nice when you get up in the morning and say, 'I'm going to work for myself,'" Amanda, 25, said.

It's a feeling foreign to many but it's even more unusual considering the job that Ryan and Amanda, wake up to do each day isn't one they had much exposure to before this growing season.Neither come from farming families. Amanda studied history at university and toiled in greenhouses until she found what she wanted to do. Ryan worked summers at Whitty Farms, a St. Catharines agricultural cornerstone. Still, he can't imagine doing anything other than embarking on a living off the land."It's been my passion since I could remember," Ryan, 26, said."He's a farmer inside," Amanda interjected."I had other things I considered but I always came back to farming," Ryan added. "It's in me. If you think about it, you're kind of dumb to be farming. It's hard work and long hours but it's just in me. Now I dragged her into it."Amanda hasn't minded. It's a career to which she has taken a shining. On a recent Saturday morning, she could be found in the kitchen of their tiny rented farmhouse hacking away at gourds to get at the seeds she's saving for a future a crop. It was a diversion from the dozens of pounds of carrots she had chopped earlier to freeze for their winter CSA.Outside, Ryan rode around on a red antique McCormack Farmall tractor that belonged to his grandfather. It's a bucolic life that is their life.It hasn't all come naturally, though. Amanda didn't know why her heirloom tomato plants were being whittled away to a mere stick this summer until mentor and neighbour farmer Ron Thiessen told her about a pest with a voracious appetite. And so went her introduction to the unsightly tomato horn worm.

Young veggie plants getting their start at Creek Shore Farms.

Sheep sheering didn't go smoothly on the first take, either. Fortunately, the Thiessens met a Brit visiting the area, who showed them the woolen ropes.The couple also tried growing some of their veggies with plastic mulch, like Ryan had seen them do with great success at Whitty's. But, striving to do things organically, what the plastic did to heat up the soil in their one-acre vegetable patch, it did little for weed control."I should never have gotten into raised beds," Ryan said, shaking his head. "The plastic biodegrades but when you are trying to go organic and do things that are good for the environment, it doesn't seem right to have black (plastic) mulch."Chalk it up to lessons in Farming 101."Everything was learning this year,"Ryan said. "It's a lot of flying by the seat of our pants but that's kind of the way it is, even if you know what you're doing."For fans of food production with a conscience, though, they're doing everything right and with boundless passion. The couple want to take some of their cues from Joel Salatin, the farmer made famous in Michael Pollan's foodie zeitgeist, The Ominivore's Dilemma. Their flocks of chicken will follow in the footsteps of their sheep flock, providing pest control and breaking the worming cycle in the pasture, Ryan explained. "We're trying to create diversity and go back to the old days," he said.

Some of the Thiessens Newfoundland sheep, which are a heritage breed.

That includes fostering trusting relationships with customers. "We have no plans to get certified (organic)," Ryan said. "We would rather our customers get to know us than a third party."The Thiessens have also learned a few lessons at the dinner table. Farming has changed the way they eat, they said. If something isn't grown here, they tend not to buy it. Meals taste even better considering most of the ingredients come from their own farm. "We had an amazing meal at Thanksgiving," Ryan said. "Almost everything there was from our own farm and it was awesome. I think people have forgotten how to eat like that."

Or how to pay to eat like that. Aside from meeting the tomato horn worm, the Thiessens have been introduced to prickly consumers whose mouths water more for cheap produce in the grocery store than fair-priced, sustainably grown food.Ryan admits it's tough to compete with broccoli that sells for a dollar in the grocery store when he and Amanda charge three dollars. "I can't even pick it for a dollar," he said. "Some people tell you bluntly you're too expensive," Amanda added with a rueful smile."Most people don't even know what it costs to grow food, especially organically," Ryan interjected. "People think food should be handed to them."The criticisms, few as they've been, have caused moments of doubt."But then you look at the books," Ryan said. 'It's not like we're inefficient. You should be able to make a living farming and not supplement it with off-farm income."

And so they will. The Thiessens plan to move their entire operation next season to the Jordan farm they are renting, using 10 acres to raise their growing menagerie of Muscovy ducks, red sex-link and white rock chickens, and sheep, along with more heirloom vegetables for their burgeoning CSA. With the expansion in land comes more choice in the offerings to their customers. There will be free-range fowl and eggs included for CSA customers and more vegetables. They also plan to keep selling their produce at farmers markets in Niagara-on-the-Lake and St. Catharines. Plans are for a rubust operation, not a big one, Ryan explained. "If we make enough to sustain a small family, that's as big as we're going to get."Click here to learn more about the Thiessens and their adventures in farming at their Creek Shore Farms blog.NiAGara: Farm Heroes and Agvocates is a series that profiles Niagara's farmers and local food advocates. Do you have a farm hero or agvocate that people should know about? Let us know by emailing eatingniagara@gmail.com