Going back to the start 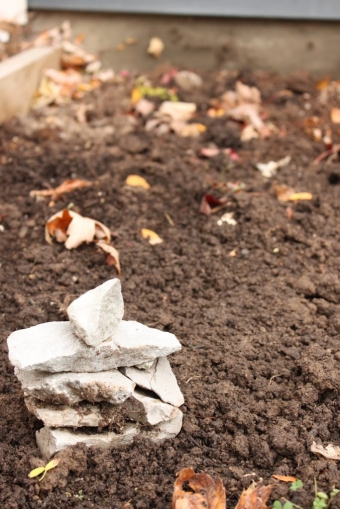 My Inukshuk marks where I can plant in the spring.

I pressed my heavy rubber-booted foot onto the top of my garden spade with a heavy heart today.

I was uprooting the last of my plants from my summertime refuge; calling it quits on a garden that, for me, was a success.

It was once home to an Amazonian eight-foot pink ruffled zapotec tomato plant, providing me with jewel-toned beauties for stuffing and, unfortunately, some meals for some burrowing bugs. I think they actually ate more tomatoes than I did, but who's counting?

My garden also had prolific pepper plants: dark purple Pinot Noir and incredibly sweet gypsies. My shepherd pepper grew tall and strong but only gave me three long, slender fruits, aborting many blooms in the process. My naga jalokias, deemed the world's hottest peppers, never materialized, though they teased me with blossoms and bushy branches.

Still, compared to last year's dismal results of five tomatoes, total, from my six tomato plants and lots of Swiss chard (a star again this year, too), the 2010 edition of my garden was an overwhelming success thanks to that maiden of meteorology, Mother Nature, being a little less of a wet blanket.

That's why I wasn't ready to let go, despite the thermometer telling me even last week that it was time — that if I didn't act soon and remove that bountiful Pinot Noir pepper to take inside, every gardener's worst enemy, Jack Frost, would have his way with it and he wouldn't be kind.

I had already pulled my tomato plant and emptied some of my containers, which produced mixed results. (My container kale was a disappointment). My garden removal has been a process done in stages so as not to be a total downer and shock to the system. With only a few stragglers left in my sandy soil, today was the last day before my patch of veggie and flower goodness returned to a barren swath ready to be blanketed with snow.

But as I put my weight on the shovel, the spade slicing easily through the moist earth like a hot knife through butter, I realized that while it was the end for some plants that had called my garden home for the summer, it was actually the beginning for others.

With a clean slate before me, I started envisioning what would go where next year. The corner closest to my patio was perfect for peppers. The spot directly in front of willow shrub that grew like a weed this year was perfect for tomatoes. My chard, well, that would line my stepping stones again next year.

My garden, cleared and ready for spring.

I also broke out my garlic cloves and planted 12, double what I did last year. I moved my Inkushuk to the end of the rows so come spring, I would remember where I could start planting again without posing a safety risk to what is really my favourite crop. There is nothing I love more than fresh garlic. It's pungent and oily and makes the most beautiful crunching noise when I lay a knife blade on top of a clove and smack it.

As I dropped each aromatic seed clove into the ground, my sense of melancholy over clearing out what had been my version of heaven was replaced by the optimism of what next summer, a blank slate, and another season's promise hold.