The beauty of the ugly duckling apple 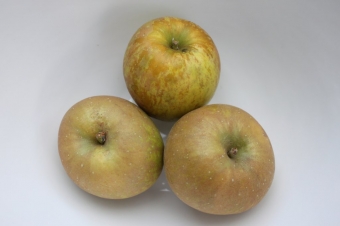 They were eye-catching but no great beauties.

They were, well, they were kind of off-looking, to be honest. Sickly even. It was on my lunchtime stroll through the St. Catharines Farmers Market that I saw this strange sight called the Russet apple. Its skin was brown, coarse and dull — nothing at all like the shiny red beauties whose company they kept. Apple-like shape aside, these were a far cry from their McIntosh and Empire cousins. If the Russet was to ever be on a makeover show, some serious microderm abrasion would be on the bill.

I asked Rob from Beamer's Family Farm, about these strange fruits his family grew. Rob loves to gab and can talk a blue — erm, red and green — streak about apples.

"What's a Russet?" I said, my nose crinkling in mild alarm at their appearance.

Russets are an old variety, he told me. They're hard to find and wouldn't be around long thanks to a short season.

Always prepared, Rob pulled out a paring knife and sliced me off a sliver. Its flesh was juicy, countered by thick, dry skin. It was also eye-squintingly tart, like citrus, but with hints of honey that came out with every chew.

Really, all the Russet did was prove true the old adage it's what inside that counts. This was a tasty apple.

A close-up of the Russet. No air-brushing here.

I bought half a peck and set off to learn the story of the Russet. Several sources told me the Russet wasn't one cultivar of apple but several varieties, known for their mottled, brownish gold "leathercoat" skin. Sounded like the Russet could really use dermatologist. This ugly duckling of apples was popular once but got squeezed off store shelves by apples with thin skins and flawless complexions. The Russet became a bit of rarity that, if eaten at all by less superficial apple fans, was done sans peel in sauces or baking.

On I read, discovering different types of Russet apples, such as the Roxbury Russet, popular in the Eastern U.S. in the 1700s. Even Thomas Jefferson is reported to have grown a tree or two in his orchards.

There's also the Golden Russet, whose flavour profile fits what my tastebuds experienced.

Then there's the Russet Egremont, and that had me wondering if I'd just been fed a line by the other tidbits I'd read that had me thinking the Russet wasn't a particular cultivar but more of a skin condition. Apparently the Egremont, which looked just like the tawny fruit I bought, was popular in the Victorian era but still a hit "with discerning apple eaters."

Me, discerning? (I feel like I should be typing this wearing a smoking jacket now).

I think I've found a fruit that could just become the apple of my eye.

I also found two great blogs about apples. Check out A Life of Apples and Adam's Apples to learn about life in the orchard and some interesting varieties of the fruit known for staving off doctors.