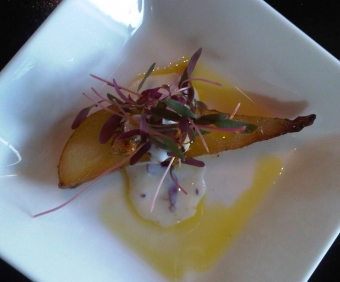 We've all met one — the type of person whose energy is infectious.

Whose presence in which you instantly feel at ease. A person for whom the term joie de vivre seemed to be invented and yet it seems too much of a cliche to impose upon them.

Niagara chef Tony de Luca is one of those people. I met the culinary guru, dubbed one of the architects of Niagara cuisine, back in June when I was interviewing him for a story for Edible Toronto.

I was more than a little nervous only because I had just finished consuming an entire season of Hell's Kitchen reruns and figured every chef has some — or a lot — of that fiery, furious Gordon Ramsay in them. I ran through my questions in my mind several times as I drove to Niagara-on-the-Lake to meet Tony at his de Luca's Wine Country Restaurant with the hope of avoiding the journalism equivalent of a Ramsay kitchen meltdown: fist smacked on the table, a glass of water thrown my way along with a few choice four letter words as my interview yells 'What kind of stupid question is that?'

The fear was all for naught. Within a few minutes of meeting Tony, he had already spilled the story of how spent his first royalty cheque when his quintessential regional cookbook, Recipes from Wine Country, was released in 2004. He bought a Harley, which he eventually — and reluctantly — gave up after his wife Kaleen watched a horrific and deadly motorcycle crash unfold on a St. Catharines street.

It begged the question and so I asked him what he planned to do with his first royalty check from Simply in Season, 12 Months of Wine Country Cooking, his latest compilation of culinary how-tos, which I was writing about. So began one of the easiest hour-long conversations I've ever had. (He wasn't sure what to do with the royalty cheque this time). I filled pages of notes, my hand rushing to capture every word. At the same time, I lamented all the wonderful things Tony was saying about being a chef in Niagara that I knew would ultimately wind up on the cutting room floor, my 1,200 words a tight fit as it was.

No sign of Gordon Ramsay anywhere, though it turns out Tony doesn't have the same fear I do, and admitted to wanting the chance to work with the temperamental kitchen superstar.

Tonight, four months after first meeting Tony, my husband and I were fortunate enough to get an invitation to a Simply in Season launch party at his Wine Country Restaurant. Wine flowed. Oysters were shucked and eaten like candy and some of the recipes from Simply in Season were created by Tony himself. They were handed out by serving staff who told you what you were eating and what page of Simply in Season to find it on.

Michel from Rodney's Oysters serves up the goods. His advice: eat them with just a squirt of lemon. He equated them to beautiful women in lingerie when served like that, although there were half a dozen sauces made by Rodney's 76-year-old matriarch named Grace to also eat them with.

As a lowly scribe, it was an honour to be there. As much as the people there respected and revered the man behind the food and book, though, he seemed humbled by it all as he milled about greeting everyone with a warm, easy smile.

Easier still was taking in all the food — carrot risotto, honey-roasted pears, lobster manicotti, tempura battered Oka cheese, Rodney's oysters and the only Brussels sprouts I've ever eaten that I liked — loved, actually. They were sweet and firm, not the usual overpowering, cabbage on crack flavour that I remember from my childhood; the taste that no gulp of milk could completely cover or wash down the gullet.

Tony's food was like poetry on a plate. And though I have no poetic ending to this post, I will say this: buy this cookbook. It's beautiful, from the candid and engaging anecdotes about his climb through the kitchen ranks, to the stunning pictures, to the awesome recipes themselves. While you're at it, visit one of his eateries, the upscale Wine Country Restaurant or his more casual Old Winery just down the road, and ensure this architect of Niagara cuisine keeps the blueprints of deliciousness coming.