Sunshine on a dreary day 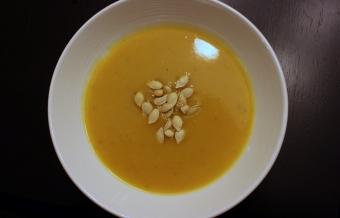 I'm sure for most people, that's no grand pronouncement but for me, this is huge. I've finally crawled out from under my comfy cloak of denial and accepted it. I acknowledged the arrival of the precursor to winter last week when I bought my first basket of apples of the season. I had tried so hard to put it off. After all, I have all winter to eat apples. I wanted peaches, plums, berries and nectarines as long as the summer could muster. I also spent a Sunday in the kitchen — my first in months — over the stove, cooking and loving every minute of it. How I longed for a day with a recipe book, my imagination and a fridge full of local produce waiting to be enjoyed. Problem is, I had repressed that desire with the summertime mindset that if it couldn't be grilled, it was too difficult to deal with and I didn't want to eat it. But I could feel my spirits lift as I stood in my kitchen and whipped up a pot of fresh tomato soup that my husband and I slurped up mercilessly later that day. I relished the scents from the tomatillos I roasted and the gorgeous fragrance given off by freshly chopped cilantro for my salsa verde. I was back where it felt like I was meant to be. Dear kitchen, I missed you. The final nod hello to the season happened Saturday when I bought a butternut squash, grown by the folks at Start Me Up Niagara, who were selling the veggies from their kitchen garden at the Vineland Research and Innovation Centre to raise money for a rototiller. Squash is the ultimate fall food. And yet, as I cut open that bell-shaped beauty, it also struck me as the antithesis of a season that can be marked by many grey, drab days.

It's vibrant golden-orange flesh was like a ray of warmth and sunshine on a cool, dark Sunday. It's the kind of colour that fills a soul with a sense of optimism and comfort — perfect for the food that exudes just those feelings. Soup. So, I scoured my recipe books until I found something that would do my squash and my mood justice. I found it in The Joy of Cooking. I bought this culinary bible back in university, hoping to learn a thing or two but I never really appreciated it until later. If you have an ingredient that you're unsure how to use, then crack the spine of this book. Irma Rombauer is godsend for people like me who are still trying to get their bearings in a kitchen. I had the choice of a recipe in another book that featured my squash with sage in a supporting role. Others starred just the squash. But I knew the Joy of Cooking edition of butternut squash soup would be the winner because of the four teaspoons of ginger it called for. It was the recipe for a soup with the beautiful comforting colour of my lost summer days and like a July sun, warmed you inside and out. The best part is, there was enough flexibility in the instructions to play with it a bit and so I turned up its fall-ness by substituting one cup of broth with a cup of apple cider. To me, it just added a level of sweetness and spice that would only complement its companions rather than clash. Topped with roasted butternut squash seeds, which are slightly sweeter than pumpkin seeds, eating this soup was like slipping on a pair of weathered jeans, a soft sweater and the snuggliest slippers two feet have ever known. So here it is, the recipe for sunshine in bowl.

Sunshine in a bowl

Cut in half and remove the seeds from: One large butternut squash. Set seeds aside for roasting and to use as a garnish later. Brush squash with olive oil and bake for about 50 minutes or until it can be pierced easily with a fork. Let cool, then scoop the flesh out of the skin. (When it’s cool, I find the skin peels away really easily).

Add: The squash 5 cups vegetable stock. Bring to a boil, then reduce to a simmer for about 20 minutes. While soup is simmering, rinse seeds and boil in water for 10 minutes. Drain and spread on baking sheet, adding a scant sprinkling of salt. Roast for 10 minutes at 400°F or until a light golden colour. Remove the soup from heat after simmering 20 minutes and puree until smooth in a food processor with a hand blender. Return soup to medium-low heat.

Add: 1/2 cup of apple cider Simmer for another 10 minutes. Salt to taste and serve garnished with toasted squash seeds.