The power of food 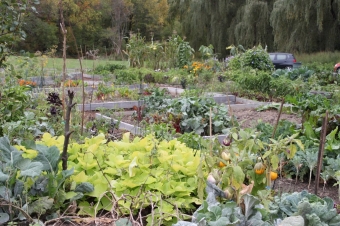 Residents of the Queenston neighbourhood are reclaiming their turf.

But they aren't taking back their beleaguered neighbourhood, plagued by problems with drugs and prostitution, by beefing up police presence.
They're reclaiming it with food.

On Saturday, about 40 people gathered in Centennial Park, nestled in the valley behind St. Catharines General Hospital, to welcome news that Climate Action Niagara (CAN) received $72,000 from the Ontario Trillium Foundation.

The local environmental advocacy group will use the money to establish more community gardens similar to the one sprouting in Centennial Gardens, a place that for years, was neglected and ignored by downtown residents, despite its beauty.

"I can't believe how much the community supports this," CAN founder Jane Hanlon told the crowd. "This is what builds resilience — community resilience."

One of the plots at the Centennial Park Community Garden.

Two years ago, Hanlon planted the seeds for a community garden there despite some trepidation about delving into the issue of poverty — something that seemed beyond the realm of fighting climate change.
But as Hanlon explained Saturday, it's the poor who will be affected most by rising energy costs — costs that will also be associated with food production — which is one of the drastic outcomes expected from climate change. So, planting a garden that anyone could use wasn't such a stretch of CAN's mandate after all.

There has been a more immediate benefit than protecting the poor from the fallout of climate change, though.

More people are visiting the park. They're coming daily. And those visitors are getting to know each other, striking up friendships over blooming pepper plants and trading gardening tips to get the most from their crops that were donated by Stokes Seeds in Thorold and Eating Niagara co-blogger Linda Crago.

With more people making the park a destination, that means the crime that was once commonplace there is becoming less of a blight. Residents feel safer and a greater sense of pride in their neighbourhood.
"You get to grow things and meet your community," gardening newbie Elvie said. "You get to know them by name."

Until this year, Elvie had never grown a garden. With just a few heads of Napa cabbage, some kale, chard and peppers left to harvest, Elvie, who lives across the street from the park, said renting a garden plot was the best $20 she has ever spent.

Gardener Elvie in her plot.

"I plant what I like to eat. The Napa cabbage, if you buy it at the store, it's $1.29 a pound when it's on sale. Here, you start your garden and it's $20 a plot. It's cheaper in the long run," Elvie said.
Any excess produce that gardeners harvest is donated to local food banks and social organizations, she added.

"Share the wealth," Elvie said. "I'm going to keep doing this every year."

Barb Perry, a member of Climate Action Niagara, and Gary Billins, a gardener at Centennial Park Community Garden, check out the progress of some of the plots at the garden. Billins has a honed a reputation for growing amazing spinach in his patch of the garden.