Sowing the seeds to save the Salad Bowl 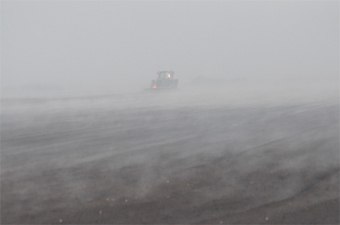 My last post left off at pleading with the public and politicians alike to ask the province to reconsider implementing a regulation that would allow the York Energy Centre — a gas-fired power plant proposed for the Holland Mars — to be built in the Holland Marsh area, Ontario's Salad Bowl, where I farm and live with my family.

Here's what has happened since then.

The deadline came and went and here we are — still engrossed in the seemingly never ending saga of a government that listens to private companies, yet says their decision is in the best interests of the people of Ontario when it comes to this power plant.

An Ontario Municipal Board hearing about the site plan conforming to the Greenbelt Plan proposed for the Holland Marsh area wrapped up in April. All we had to do now was await a decision from the chair of the OMB, right? Wrong!

We found out in June that the provincial government announced it wanted to pass a regulation exempting the power plant from all oversight and legislated control the Planning Act would provide to the municipality through a site plan agreement with YEC. This in spite of comments made at the Town Hall meeting in Feb. 2009 by then Energy Minister George Smitherman that the municipality would have the final say about approvals. (Interestingly, the Liberals passed a law in 2006 disallowing the rights of municipalities to go to the OMB to oppose power projects).

This case is the first time this regulation has been used. A 45-day comment period was allowed this spring, giving the public time to tell the Ministry of Municipal Affairs and Housing whether they were for or against the use of the regulation exempting the power plant from the rules and regulations of the Planning Act. July 12 was the deadline for submitting comments.

On July 29, we found out the regulation (305/10) had been passed. Therefore, the OMB chair wouldn't be making a decision about whether the power plant conformed to the Greenbelt. Also, the OMB hearing scheduled for Aug. 9 to deal with King Township’s interim control by-law was cancelled. Since the power plant doesn’t have to abide by the Planning Act, this site is exempt from the provisions any interim control by-law would have.

On Aug. 4, the Lake Simcoe Region Conservation Authority released a permit under allowing YEC to conduct hydrological studies on the site. To my knowledge, those were to have been conducted and presented at the proposal stage — like all the other proponents. More proof that the Ontario Power Authority's procurement process is flawed, or at least in serious conflict!

The YEC was to have developed a natural heritage evaluation study, a hydrological study and an environmental impact statement for the site as part of the permit process two years ago.  As a result of Regulation 305/10 being pushed through, a proper review of the potential environmental impacts of this facility in this location will not occur now.

In the meantime, a group of concerned citizens and the Green Party have initiated legal action against the  province. They are requesting a judicial review of the process that has allowed this project to proceed. We have asked our township council to join our claim, but the CAO and legal counsel advised against taking this action.

We are asking other municipalities to join us, though. If this abuse of power and ignorance about the importance of an intensive food growing area can happen here, the reality is it can be happen anywhere, regardless of legislation in place to protect such an area.

It baffles me that the government and OPA would endorse this project with such voracity and yet ignore the knowledge and information offered by the farmers in the area who have been providing fresh vegetables to Ontarians for the last 80 years! They have even gone so far as to dismiss us as NIMBYs.

Our township followed every municipal and legal rule placed before them. If everyone had played by the rules, we should have won this hands down. The fly in the ointment, however, was the province changing the rules every time we gained ground.

We haven’t given up this fight. We are continuing to try to make the provincial managers come to their senses.

As I've said before, I find it curious that our provincial government is falling all over itself, changing rules to satisfy a private company (one whose ownership is only half Canadian) and insisting this is in the best interest of the people of Ontario. Meanwhile, they do nothing for our own Ontario/Canadian Farmers who feed the people of this province/country, and who operate our farms for the health and best interests of the people of Ontario! Talk about having priorities mixed up and confused.

Why did the provincial government interfere with the OMB ruling process and allow the OPA to make decisions that are questionable at best?