Props to the prune 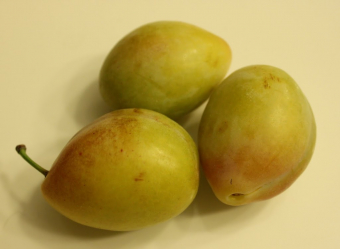 I must apologize to the pear.

All this time, I thought the tear drop-shaped fruit was the unsung hero of the Niagara fruit world. Everyone gets excited about strawberries and cherries and peaches. Even apples evoke some elation. But let's face it, the pear isn't exactly the cool kid among the local fruit scene.

I certainly don't get giddy when I see my first fresh, local pear of the season and while I enjoy them immensely when I eat them, they don't exactly cause the same euphoric reaction that my first peach of the year does. Or my 50th peach for that matter.

But alas, all is not lost for the pear. I have found a lowlier fruit.

Your nose wrinkled and you nodded in agreement when you read that, right?

That's certainly the reaction I got from many this week after I bought a quart of prunes (fresh, not the dried — please, I'm 33 not 80) at the St. Catharines Farmers Market from the Beamer family, who farm in Ridgeville.

I was ecstatic to see the diminutive, deep purple fruits finally ready for eating. I shared my excitement with the woman who sold them to me.

"They're super sweet," she said, a big smile on her face.

"I love prunes," I professed.

I went back to my office and wolfed down three. Then I went to wash some more, stopping along the way to offer some to my co-workers.

"Prunes? Are you constipated?" one woman asked. "I didn't even know you could eat them like that. I've only ever seen them dried."

She turned down my offer.

She was missing out, I thought.

I showed my boss what I was proffering. She eyed them a little suspiciously and was somewhat surprised by their taut, wrinkle-free appearance.

Still, she took one. She bit into it. And she liked it. Really liked it. She ate a few more.

But that was about all I could do to convince anyone to see the merits of this lovely, deliciously mellow fruit.

When I tweeted about my find at the market, I got no zealous RTs. Usually I get some response to my latest fresh, local food find. The prune elicited nothing.

I tweeted again about how tasty they were. Still stonewalled by 1,280 tweeps.

But there is someone who hopes to turn over a new leaf for this maligned and misunderstood fruit: Dr. Jay Subramanian at the Vineland Research and Innovation Centre. He's technically a plant breeder with the University of Guelph and one who is generating lots of news copy lately with his white-fleshed peaches being test-marketed at Longo's and development of fuzzy fruits that can grow into late September.

Last week, I sat in his office asking about the many strange and unusual fruity orbs sitting on his desk. Among them were golden, walnut-sized mystery fruits.

Turns out, they're his latest experiment. Subramanian seems to be a champion of the prune, too. He is working at developing prunes that, through a genetic mutation, don't have skins that turn blue. Those blue skins, which I love for their tartness, can be bitter and a turn-off for some, he said. The mutation that causes these almost albino prunes happens on occasion on its own. Subramanian has been studying the hows and the whys to see if he can turn it from spontaneous, natural mystery to a deliberate trait.

Subramanian was hopeful the yellow-skinned prunes on his desk would be golden in the flavour department — a new crop that could de-stigmatize the prune and have greater appeal, dried or fresh.

A regular, dark-skinned prune and the golden prune

Today, after picking nectarines with Subramanian at the centre's Victoria Avenue orchard, which he offered up for my side project, The Garden of Eating — Niagara, he reached into his car and pulled out a handful of the mystery fruit

I bit into it. It was delicious. Firm, golden flesh. A heavenly sweet flavour.

Turns out, it was one of the golden prunes that he is working hard to make a fruitful future crop for local farmers.

This prune was far from being the pits or resembling that senior's staple.

"This is really good. I could see this really appealing to people and being a novelty," I said.