The crown jewel of summer 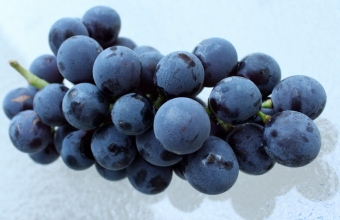 All hail the coronation grape.

Don't get jealous, peaches. You're still my favourite fruit. But you share that spot on the throne with another quintessentially Niagara fruit: the coronation grape.

If ever a grape could make you swoon, this is it. If ever a grape tasted like a grape, this is it. Just think of all that grape-flavoured candy or any other grape concoctions you've eaten. Buy some of the imported wood, bulbous berries in the grocery store and it's easy to be confused given anything with grape flavour and the fresh foreign version seem worlds apart in taste. How could one have inspired the other? At least the taste of a peach candy bears a resemblance to the real thing.

Eat a coronation grape, which, at first glance, could be mistaken for a blueberry, and it will seem like you found the muse for anything mimicking the sweet taste of grapes.

I found my first bunch Niagara-grown coronation grapes at Hozjan's fruit stand on Canboro Road in Ridgeville soon after moving here five years ago. I ate one and fell in love with its fragrant flavour.

One bite, and the firm berry explodes in your mouth. Its greenish, sweet, jelly-like flesh separates from thick, deep purple/blue, cheek clenchingly tart skins, which are dusted with a beautiful bloom that actually sparkles when it catches the light. Keep chewing and the flavours only balance each other out rather than fight one another for supremacy. It is the perfect grape.

The bloom (white film) on the deep blue and purple skins of the coronation grape.

So what's the scoop on the coronation grape? The coronation (its proper name is Sovereign Coronation) is a hybrid that was developed in British Columbia 40 years ago, where it's also grown. This table grape only made its appearance in Niagara about 10 years ago and quickly became the crowning glory among locally grown table grapes. It's the most commonly grown fresh-eating grape in Ontario.

Niagara produces more than two million kilograms of these jewels, which are a descendent of the who's who of the table and juice grape crowd, the Concord. In a normal year, they start making their appearance at fruit stands and in stores around mid-August, hanging around for only about 30 (short) days.

Thanks to the the heat that has sped up the ripening of just about everything this year, I ate my first coronation grape of 2010 about a week ago.

Though I love eating them fresh, plucking the small berries from their tightly packed bunches, they can be frozen, used as pie filling and be the makings of jam and jelly. Apparently, they're also good in salads. Not only do they have they air of a blueberry, they also make a good substitute for them in some recipes, too.