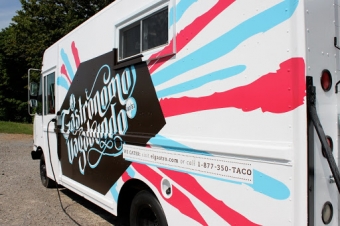 Adam Hynam-Smith and Tamara Jensen are putting a new spin on dining in Niagara.

Think stepping right up and placing your order for some fine fare at the window of a kitchen located in the back of a souped up cube van.

Called El Gastronomo Vagabundo, this mobile mouthful of a gourmet food truck is Hynam-Smith and Jensen living their dream of feeding people good food while driving away the pretence that can sometimes come with it.

"We want to do something different, something cool, something out of the norm, something relaxed, unpretentious," Hynam-Smith said as he readied for a busy day serving Israeli couscous and tacos to hungry visitors at Flat Rock Cellars in Jordan where El Gastronomo Vagabundo is currently parked.

The only thing getting tucked in at the duo's driving diner are the edges of tortillas for the gourmet tacos being served up at El Gastronomo Vagabundo. Although it says tacos on the chalkboard menu that changes daily — sometimes even multiple times in one day — don't expect your usual Mexican fare.

The menu at El Gastronomo Vagabundo

This past Sunday, Hynam-Smith and his partner and apprentice Jensen were serving up such surprises as the Don Caprese, a concoction of tempura mozzarella, avocado, tomato and basil dressing. It was accompanied on the menu by Budha Belly, a taco containing five spice pork belly, chili jam, coconut cream and kaffir lime. Geishian Vacation with its tempura salmon, mango, papaya and jalapeno salsa and tobiko aioli rounded out the taco trio.

All the fixings that can be are sourced locally from farmers such as Eating Niagara co-blogger Linda Crago, Lake Land Meats, lamb farmer Liz Black and the garden growing at Flat Rock.

"It's not meant to be fusion," Hynam-Smith stressed as the scent of red curry for the pork belly taco wafted through the truck's galley kitchen. "We don't want to be seen as fusion."

The tortilla, he added, is merely the vehicle with which to hold and transport the food.

The wheels for El Gastronomo Vagabundo — translation the Gourmet Vegabond — started turning for Hynam-Smith while he worked in a kitchen in Ottawa. The Australian-born chef, who has trained in diverse kitchens down under before travelling to Southeast Asia to learn the traditional cooking methods there, recalled coming up with the idea for a gourmet food truck while putting tacos together at work.

He mused about having a storefront where he could serve up the tortilla-wrapped take out. But with the Kogi BBQ putting rubber to asphalt in L.A. and making headlines all the while for taking dining on the road, Hynam-Smith thought a mobile kitchen would be even better.

"They started the revolution of coolness," Hynam-Smith said.

The benefit: "Overhead first and foremost. You can do something different," Hynam-Smith said.

That's exactly what he and Jensen were ready for when they decided to leave Ottawa a year and a half ago for a place less bureaucratic. They settled on Niagara after Jensen, who has her masters in forensic psychology, brought her family to Niagara for a getaway.

"It was just such a contrast to Ottawa," Jensen said while taking a break from chopping tomatoes. "We thought the best climate in Ontario is here. There's great wine, great produce. It seemed to make sense coming down here."

Tamara Jensen and Adam Hynam-Smith talk about the day ahead of them at El Gastronomo Vagabundo.

Jensen, who had already been keen to trade in her job at correctional headquarters for something in the hospitality industry, and Hynam-Smith began cold-calling local chefs to talk about their idea. They bent the ear of Wellington Court's Erik Peacock, who lauded the idea, before Hynam-Smith met Flat Rock winemaker Ross Wise at last year's Niagara Wine Festival and handed him a card.

"I was so pissed. I had red wine on my shirt," Hynam-Smith said with a laugh.

The next month they got a call and an offer. They were given a budget and told to show the powers that be at Flat Rock what they could do.

After wowing taste buds, they pitched the idea of the truck and have been going full throttle getting El Gastronomo Vagabundo going ever since. The duo began serving tacos officially three weeks ago.

"They've been passionate and helpful getting it started," Hynam-Smith said. "They've done a lot to help us, which we've been absolutely grateful — over the moon — for."

The truck is parked at Flat Rock each weekend until October, serving meals 11 a.m. to 6 p.m. Friday through Sunday. Fifteen dollars gets you the prix fixe meal of two tacos and a side salad. Tacos are also individually priced.

The plan is to take El Gastronomo on the road the days it's not at the winery, pulling up to food festivals or local businesses to serve the masses. In the winter, Hynam-Smith envisions stews and soups being created in his mobile kitchen.

El Gastronomo's arrival on the Niagara culinary scene is a milestone, being the first gourmet truck in the region. That aside, it's also a milestone for Jensen.

"This is the first vehicle I've ever bought," she said taking stock of the flamboyant white, pink and black cube truck. "My first vehicle is a gourmet taco truck."

* Editor's note: I would have liked to include pictures of tacos, but my husband and I devoured them before it could happen. They were awesome, though.