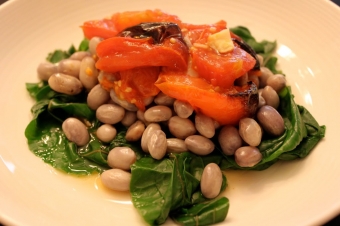 I was on a mission when they distracted me.

Thursday, while walking with purpose toward a display of peaches at the St. Catharines Farmers Market, they caught my eye. Suddenly my destination changed to an overflowing basket of Roma beans in their mottled fuchsia and pale yellow pods at Havleszky's Fruit Farm stand.

I haven't seen fresh Roma beans since 2007 when I experimented with the 100-Mile Diet, mostly because I haven't looked for them. Three years ago, I found them at Gallagher's Farm Market in Fonthill and felt like I won the lottery. It was a protein source for this hungry vegetarian locavore that didn't involve goat milk, goat yogurt or cheese from the quirky creatures.

I didn't know what I was going to do with those magical beans, save for gorging myself and hopefully bulk up a little bit. What I made was a meal that tasted like heaven, that filled a hunger beyond the one rumbling in my stomach. I had so wanted to make my foray into strictly local eating a success and that discovery proved I could do it for at least one meal.

So I gorged. And gorged some more. And then a little bit more. I ate those Roma beans with roasted tomatoes and Swiss chard several times in the span of a few weeks and it took until this week to feel the same delight about those beans that I felt so thoroughly three years ago.

I bought a three-litre basket and knew right away what I was going to make — my piece de resistance during my 100-Mile Diet days: Romas and roasted tomatoes served atop a bed of lightly steamed Swiss chard.

The meal was pure comfort from the very first beans I shelled tonight. In the warmth of the afternoon changing to evening, I sat in my garden with my cat Otis at my feet and shelled those beans, marveling at their snowflake-like uniqueness as they spilled out of their tough wrappers and into a bowl. Some were pure white with vibrant purply-pink spots and stripes. Others were creamier in colour with baby pink patterns. The odd one bore magenta skin with white speckles. They were beauties.

Next it was to the kitchen where I quartered two pounds of field tomatoes I just bought at the farm stand near my house. They were juicy and red — not gritty and flavourless like the tomato-like stand-ins grocery stores ply us with in the winter.

I laid them out in a baking pan, seasoned them with salt and sugar, coated them with olive oil and dropped in four smashed cloves of local garlic. There is not task in the kitchen more enjoyable for me than smashing fresh garlic. It's crisp and breaks apart so easily. It's an action that always has me in the moment, taking in that sound and pungent smell.

Into the oven the tomatoes and garlic went, until 50 minutes later, when I pulled them out, bubbling, steaming and with tomato skins blackened in spots. Those are my favourite bits because they have so much flavour. It's rich and sweet and warm. Taking a bite is the equivalent  of slipping on a pair of fleece, elastic-waist pants — an 'ahh, that's better' kind of moment.

The roasted tomatoes and garlic

After cooking the beans for about 15 minutes in boiling water, they come out a pale purple/grey colour. Not the most appetizing but on a bed of deep green chard and topped with the caramelized tomatoes, it's a pretty mouth-watering sight.

It's even better on the tastebuds.

I have to be careful, though. I'm already looking forward to hitting the market Tuesday for more beans. But I need to pace myself so that I don't fall into the same rut I did in 2007 and turn a delicious meal into a boring routine.

I don't know that I want to have to wait three more years to finally want to eat it again.