The life of chard 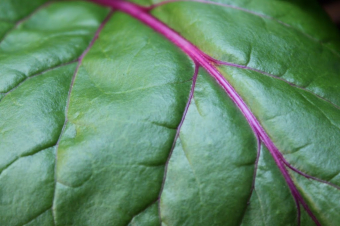 It's like a living textbook about the life stages of chard.

Most of my garden at the moment is taken up by the leafy green — from the young, crinkly shoots in their vibrant joie de vivre green to the more sedate, deeper shades on the billowing, mature and ready-to-harvest leaves.

Some young shoots of the leafy green

Then there's the elder statesman of the bunch. It's a plant that I took indoors over the winter with the hope of being able to harvest fresh, homegrown greens throughout a season that is usually a bastion of imports. No such luck. It seemed to go dormant, its leaves staying the same size when I transplanted it back outside this spring as when I dug it up and brought it inside last fall.

Thank goodness for Linda and her knack for getting things growing in the winter. I was able to get my fill of local greens and chard advice. She told me that I shouldn't give up on my chard, which I assumed was deciding whether to live or die. Just replant it in the spring and it will turn to seed.

Sure enough, it did. Well, one plant did. The other  is still providing me with plentiful harvests of large leaves splayed around a hot pink artery of a stem.

The elder statesman, however, gave me a few fresh leaves then shot up tall before hunching over and becoming a tangled mess of seedy tentacles that I've been waiting for months to just dry already so I can harvest the seeds and yank what makes me look like a negligent green thumb. Like spending time with the elderly, my senior chard requires patience. When it's ready to give me its seeds, I can apparently slide them off its arthritic-looking offshoots like the childhood nature guessing game of Tree or Bush played with blades of grass-turned-seed.

I could just buy chard seeds but there is an unfulfilled need I have to harvest seeds myself — to be responsible for the entire cycle of a plant and therefore, my food. And chard was a likely candidate because it is one of my favourite vegetables.

Chard just waiting to be eaten

Better than spinach, its mild leaves have more texture and hold their own when cooked. I had a friend mock me once when I told her a pound of chard or kale was my comfort food. But to that I say why not?

This member of the beet and spinach family is packed with fibre. OK, so metaphorically speaking, fibre might not be the character at the top of the invite list for the party of the year, but it's the one that would bring a useful hostess gift.

One cup of chard also provides a person with more than 700 per cent of the recommended daily intake of vitamin K, 100 per cent of the needed vitamin A and it packs a pretty powerful vitamin C punch with about 50 per cent of the suggested daily dose. B vitamins are also well-represented and so are minerals, such as manganese and copper. It's also loaded with iron, but a dietitian recently dashed my dreams about this leafy green by telling me it's not very easily absorbed by our bodies.

Some of the many shades of chard


Still, I love chard. With all of the colours it comes in — red, yellow, white — it's a beauty and one of the easiest things I've ever grown. If I can grow it, I'm convinced anyone can.

The many stages of chard: Ready to harvest at front, the elder statesman behind that and young chard at the back, all under the watchful eye of my greenskeeper, Sonny.

But there are a lot of people leery of this lovely leafy green. Not sure why. In fact, when I emailed Linda five years ago to ask if I could join her CSA, I'm sure my message was as much a plea as it was a rambling love letter to Swiss Chard.

Here's an easy summertime version of one of my all-time favourite foods by a guy to whom I could also easily write a rambling love letter: Jamie Oliver.

Rip up some chard, stems and all (you can use spinach, arugula or watercress).

Fold a double piece of tinfoil in half, sealing up the two sides to make a pouch or little bag.

Drop in the leaves.

Sprinkle with sea salt and seal the final edge.

Wait until coals or grill has cooled a bit (otherwise, the leaves will burn and stick to foil, speaking from my own experience).

Steam in the bag on the barbecue for five minutes.

(From Jamie at Home)