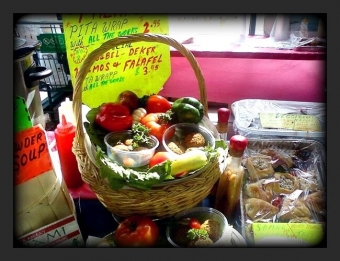 It's 4:30 a.m. Do you know where your neighbourhood restaurateur is? If it's Tony and Amira Barbari then they are getting started on another day at their downtown Lebanese eatery, Tonami.

"It's not like I can just open a can," Tony told me today when I bought a falafel wrap from him at the St. Catharines Farmers Market, next door to Tonami's King Street location. Part of Tonami's display at the St. Catharines Farmers Market (photos by Katie Job) If it was that way, the Barbaris, who came emigrated from the Middle East three years ago, would be able to sleep in.

But because they choose to make their tabouleh, hummus, falafel, lentil soup, baklava and other staples of an eastern Mediterranean diet from scratch, they forgo sleep so their customers at both the market and their restaurant can eat food the Barbaris feel good about serving. I first met Tony in March 2007 while working at The Standard. A reader wrote in to another reporter, noting this newcomer to the St. Catharines' dining scene and the hard work he was putting in as a newcomer to Canada.

The story was passed on to me and turned into a feature about Tony's efforts to build his life in the Garden City. He arrived here alone at first, Amira's journey delayed by the outbreak of violence between Hezbollah and Israel in the summer of 2006. I didn't know what to expect other than a guy who makes tabouleh and baklava (made with Niagara honey, Tony pointed out when we met). What I got was a story that I will undoubtedly (fingers crossed) never relate to in my lifetime.

Tonami hummus When we met more than three years ago, I learned that Tony had already been in St. Catharines nearly a year, laying the foundation for the life he would build here with Amira, when she finally arrived in the summer of 2007.

Tony was 52 at the time but had more stories of upheaval and heartbreak than one might expect to be crammed into one lifetime.

Tony told me that this was his second foray into making a go of it in Canada. He came to Montreal as a student in 1970 but that turned into a false start for life in Canada after he brought his dad Fouad and mom Bahyia here. Fouad became ill and it became clear that returning to the Mediterranean climes of Beirut was the only medicine that could allow him to live out his final years in comfort.

It was 1986 when the family moved back. Lebanon was in the midst of a civil war at the time. Tony didn't want his parents returning alone, so he packed it in in Canada to be the good son. Given the turbulence in his birthplace at the time, Tony will tell you today that was a mistake.

Going to funerals became a way of life — a life that was lived day to day with survival becoming a dangling carrot. Tony has scars all over his body, the marks of shrapnel from a bomb that exploded in his midst.

It was an act of hate on day of love — Valentine's Day in the mid-1990s — when Tony was en route to deliver flowers to a woman named Amira, who he was courting. Have him flex for you and you can feel how he still carries that day with him. A piece of shrapnel is lodged permanently in his right bicep.

The only good to come of that time spent in Beirut was meeting Amira, his Muslim love who converted to Christianity for Tony. He will tell you she was the light during many dark days in Beirut.

But Tony isn't one to wallow.

While he talked about his past when we first met, he also wanted to talk about his future and the key ingredients to his success in Canada: tenacity and olive oil, the latter being something Tony swears by for any meal he makes.

Since then, I've been a regular at Tonami. Stopping in for lunch — for me that's usually tabouleh and lentil soup — is like stopping by to see family now. I always get big smiles, conversation and, if I'm lucky, Tony will sneak me a piece of baklava.

I hear about how business is going, Amira's pending trips back home to see her children, how the weather is wearing one or both of them down. I have a comfortable relationship with the Barbaris that I don't have with any other restaurateur or business owner in this city.

As I wait in line to place my order some days, I see and hear that I'm not the only one who has formed that kind of bond with the couple.

Though I occasionally break from habit and get a falafel wrap, the lentil soup is my comfort food. I often eat it a few times a week, savouring the hearty lentil flavour brightened with a splash of lemon juice. Simmered slowly to create the broth, the lentils are accompanied by garlic, spinach, olive oil, and the lemon. That's it. Simple. Comfort. Food.

And the tabouleh, predominantly parsley bulked up with some bulgar wheat and tomatoes, and dressed with lemon juice and olive oil, is a light, refreshing side dish. I get major cravings for this combo and my mouth is watering as I write.

Even better is the fact that I get away with lunch for under six dollars, even if I'm really hungry and opt for soup and one of their filling falafel wraps, served up with a generous spritz of hot sauce. That kind of bargain is all part of the couple's business plan, as explained to me three years ago.

Tony wants the people of St. Catharines to eat and eat well. His future is here, he told me, and so is stability. Fortunately, Tonami is here, too. (Photos by St. Catharines photographer Katie Job)