A peachy keen time of year 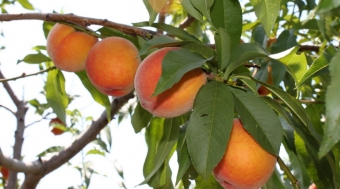 That's how I feel at this time of year. Or like a locavore at a farm stand. I find myself giddy with all that Niagara has to offer right now — a few weeks ahead of schedule, thanks to the steamy hot days we've been having. Corn, plums — did you know that yellow plums are a unique Niagara crop? — apricots, blueberries, raspberries, beans, tomatoes, new potatoes and my personal favourite harvest here in the buckle of the fruit belt, peaches.

I dream about mid-July in the dead of winter. I long for peach season, the peak of summer and when Niagara's cornucopia overfloweth. Today, I set out in search of some peaches, bound for my usual fruit stand stop, Tina's Niagara Selections, with my camera in tow to capture the harvest in action.

A young, unripened peach basks in the sunlight in a Lakeshore Road orchard.

The farmer who owns Tina's is Audrey Tocco, a no-nonsense gal I met two summers ago while still reporting. We talked hail and she lamented the forgettable, temperamental summer that 2008 was shaping up to be at that point. Her large orchards on Lakeshore Road in Niagara-on-the-Lake hadn't been pummeled yet by the ice pellets when I interviewed her, but her neighbours' had and suffered a devastating year while Tocco kept her fingers crossed she would get through unscathed.

Since meeting Audrey, I've made a point of cycling to her fruit stand, named after her mother, and where gentle jazz spills out of stereo speakers. I bought a three-litre basket of peaches today and paid four dollars for them — a fair price.

The peaches at Tocco's farm stand.

I don't say that to be self-righteous. I say that because the words of one of my personal heroes, Len Troup, chair of the Tender Fruit Producers Marketing Board, continue to reverberate after a conversation last winter when Troup, one of the wisest, most astute people I know, worried for the future of his membership.

Minimum wage was set to rise to $10.25 at the end of March. The George Morris Centre, an independent agriculture think tank, was predicting that, as a result, the number of peach growers in the province could be halved. To prevent that, Troup just wanted grocery stores to charge a fair price for peaches this summer — $3.99 a basket instead of the usual, door-crashing $2.99 — and give that extra dollar back to the farmer.

I haven't been into a grocery store since they began stocking peaches this week. I've been afraid to look, worried that I'll see $2.99 peaches and be left frustrated by the fact that farmers' dire warnings about their potential fate have yet again fallen on deaf ears.

I'll enjoy my four-dollar peaches instead, happy with the bargain I got and not worried about the one I missed.

I ate one of these peaches, which had fallen before they could be picked. It was sun-warmed, soft and juicy. Perfect.