Finding my thrill in a Pelham blueberry patch 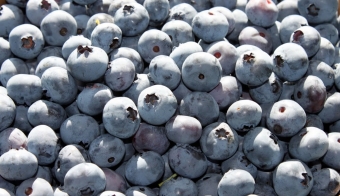 The simple white sign with its blue stencil letters beckoned me for four summers.

It usually started to make its blink-and-you'll-miss-it appearance at the corner of Centre Street and Highway 20, near the highest point in all of Niagara, around the middle of July. There it would stay, the weeds growing taller around it, until well into August.

A keener to do the PYO, I made a mental FYI and carried on my way. I took comfort in knowing that with blueberry season lasting upwards of six to eight weeks, I had lots of time to make time to pick. No surprise, the sign would one day disappear and with it, my opportunity to have a hand in loading up on the tiny fruit with big health benefits.

Instead of incidentally coming across the sign this summer, I set out in search of it Saturday afternoon. And just as much as I can count on June morphing into July, there it was in its usual spot.

Maybe my apathy in previous years had to do with a not-so-subconscious aversion to picking blueberries. Strawberries I can handle. Ditto for cherries. Large by comparison, the duo of red summer fruits fill up baskets in no time in comparison to blueberries. I only know this because five years ago, in an effort to help a friend who had just bought a blueberry farm near Straffordville and win the affections of her brother, I offered to help pick berries her first season. I would be paid $6 a flat. No chance for early retirement, but I would work fast, I told myself. I'd pick flats in no time flat.

By the end of eight weeks, I had worked my way up to two-and-a-half flats in six hours, my efforts outshone by the migrant Mexican Mennonites, who, with their nimble, rake-like fingers, filled about 10 flats in the same time. All I got that summer was a good tan and a dysfunctional relationship that lasted too long.

This summer, though, those memories clearly blocked out, I headed to 1130 Centre St. to pick blueberries. I pulled into the grass laneway and found another simple sign, instructing me to honk my horn three times. Nearby, a table with a grass umbrella stood, lightly stocked with baskets of different sizes and a typed price list, welcoming me to Arthur's Blueberries.

If I wanted a pint it would cost me $1.50. Two litres? $6. I couldn't believe what I was reading. I had just paid $4 a pint at the market earlier in the week. The quantities grew larger as the list went on with prices that made me feel guilty (almost). I didn't want to be greedy. Two litres would suffice for a price that had stayed the same for 12 years, as indicated by the handwriting in black magic marker replacing the outdated, typed '10 years' on the sign.

Dressed in yellow shorts and a straw hat that said Margaritaville more than Ridgeville, Brian Arthur walked over and after giving me the OK to pick, he asked if I'd ever been to his blueberry patch.

"You know, for years I saw the sign," I said, adding I had lived just down the road in the old Pelham District High School, now apartments. "I meant to come but next thing you know, the season was over."

"No excuse, no excuse," he shook his head and waved off my words.

He was right. Hearing it aloud, I realized how lame it actually sounded.

So, he walked me to a stand of canes, told me he gets 15 to 20 cars a day and that I came at the best time. The berries were at their ripest.

"It'll take you no time at all to fill this," he said, handing me my two-litre basket.

I wanted to believe him, but as I stood there looking at the canes, the memories of five summers ago came back. I shook them off.

"Great," I convinced myself.

Turns out, Brian Arthur has invited blueberry lovers annually to his large rural property in that grey area of Pelham between Fenwick and Ridgeville for the past 20 years. Growing blueberries is a hobby.

Some of the large berries ripe for the picking in Arthur's patch.

When he bought his pastoral property, it was full of pear trees but a visit by an extension specialist from the Ministry of Agriculture soon after moving in convinced Arthur he would be wasting his efforts continuing with the tree fruit.

"I asked him what would grow here and he said, 'Not pears,'" Arthur said.

Near the back of the orchard, a few old blueberry canes thrived and the extension specialist suggested replacing the orchard with a blueberry patch.

That original stand is still there, it's branches still producing fruit like they have for at least 50 years, Arthur figured.

He doesn't know what variety they are, only that they're blueberries and they taste good. Humans aren't the only ones who appreciate the sweet juicy fruit.

"I had a mom and pop deer with a baby out here this morning," he said as he took me on a tour, pointing out his irrigation pond and some of the thickest, heaviest branches.

Arthur said with the hot summer we've been having, he may get another two or three weeks out of the season. There's no way it will stretch into August this year. Now is definitely the time to pick and he's open everyday from 7 a.m. until 8 p.m.

"Everybody thinks I'm just trying to sell them berries when I say that," he said. "Then they come back two weeks later and say, 'What happened to all the berries?' and I say, 'Your friends came and got 'em.'"

As I handed him my $10 bill to pay for my haul, the pang of guilt came back. I should offer to pay more, I thought, as he rooted through his hip sack for change.

Before I protested, Arthur handed me two loonies and a toonie.

"And four makes us friends," he said.